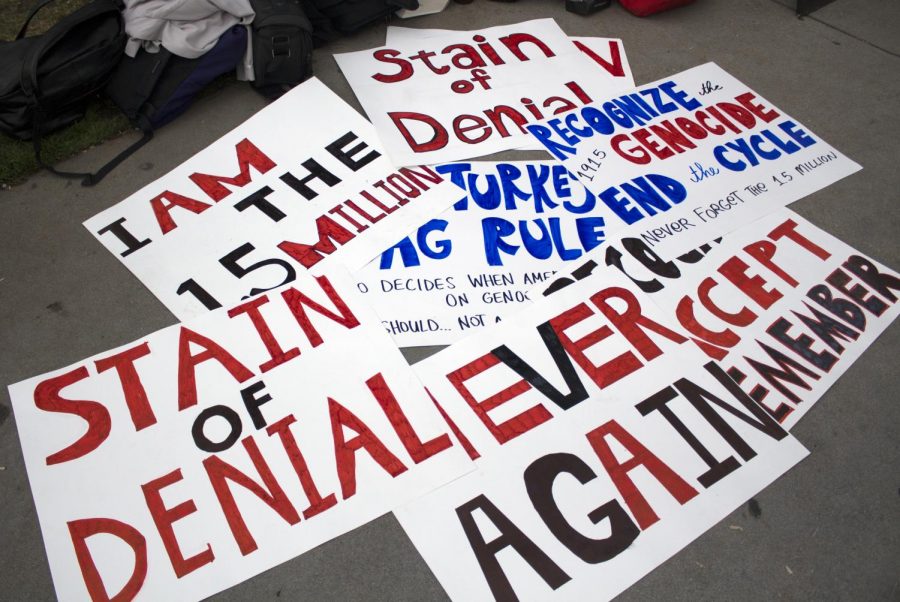 Members of CSUN's Armenian Students Association were unable to raise awareness of the Armenian Genocide on campus this year due to the coronavirus.

The Armenian Genocide is an event that defined an entire culture and ethnicity. It is a direct representation of the Armenian people’s resilience and willingness to survive. Every year to commemorate the start of the Armenian Genocide, thousands of Armenians in Los Angeles would organize and march in protest towards the Turkish Consulate, demanding recognition for the murder of their ancestors at the hands of the Turks. The arrival of COVID-19 has put a stop to this year’s protest, but the Armenian community is still finding ways to commemorate this event in their history.

“We are very saddened by the fact that we could not attend the March for Justice this year,” said the CSUN Armenian Student Association. “We have turned to a virtual platform to spread the awareness and recognition of the 1.5 million Armenians that perished.”

According to the National Council for the Social Studies, The Armenian Genocide took place from 1915 to 1923 and saw the death and deportation of over 1.5 million Armenians in Eastern Turkey. This region is historically known as ethnic Armenian land, but at the time it was occupied by the Ottoman Empire.

“The issue of Armenian Genocide recognition is one of the most important issues to the Armenian people,” said Levon Shahnazarian, a member of the University of California Santa Cruz ASA. “Official recognition by the government is something the Armenian American population has wanted for a long time.”

The bill was successfully passed in both the House of Representatives and the Senate but was eventually vetoed by the Trump administration in December 2019, effectively killing the bill. When the bill returned to the Senate, the senators sided with the President’s decision and did not pass the bill into law. Officially, the U.S. government still does not recognize the Armenian Genocide.

“The United States should recognize undisputed facts about a historical event regardless of political motivation,” said Vahn Voskian, a 20-year-old CSUN student. “Recognition by the United States will greatly help improve awareness and education of the Armenian Genocide and other horrible acts like it.”

Voskian is a member of Alpha Epsilon Omega, an Armenian fraternity on campus. AEO,  along with other campus organizations like the CSUN ASA, try to raise awareness for the Armenian Genocide.

Every year, Armenian students at CSUN try to raise awareness for the Armenian Genocide through things like silent protests and marches through campus. According to the CSUN ASA, the organization holds events like candlelight vigils, culture festivals and remembrance events like putting up crosses on the Oviatt Lawn.

“Our cultural events help bring peace to our lost ancestors,” said the CSUN ASA. “America has the second-largest Armenian population, so we think raising awareness will help so that history doesn’t repeat itself over and over again.”

“The march is always one of my favorite days of the year,” said Karina Arevalo, a 21-year-old CSUN student. “It makes me feel patriotic and a big sense of community.”

Arevalo is of half Armenian and half Guatemalan descent, so her inclusion in Armenian activities such as the march helps her feel a stronger attachment to the Armenian community.

With the COVID-19 pandemic, the march was not possible this year, so the Armenian community has found other ways to commemorate their ancestors. The United Armenian Council of Los Angeles, the Unified Young Armenians, and the Armenian Genocide Committee have organized a relief effort for those affected by the pandemic. They are donating 1.5 million meals to food banks and shelters across the United States to honor the 1.5 million Armenians that were lost in the Armenian Genocide.

“With recognition, the Armenian community can finally begin to come to peace with this atrocious part of their history and begin to move on and heal,” said Voskian.