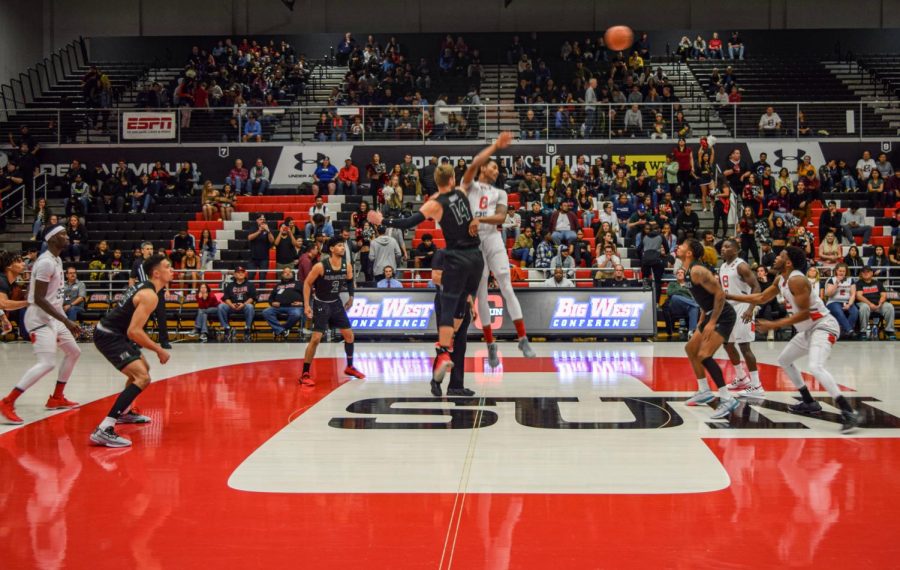 Fidelis Okereke joins the CSUN men’s basketball team as a power forward for the 2020-2021 season.

Fidelis Okereke was on the verge of spending his college career at Coppin State University after receiving his first offer from them on April 18. He planned to commit the next day, but ultimately decided to push it back two days. The following day, CSUN head coach Mark Gottfried swooped in and got the 6-foot-7 LA City Section Player of the Year on the phone.

The CSUN men’s basketball coaching staff picked Okereke’s brain, asking him how he compares to other bigs and in what ways he can improve. Okereke in turn asked them about how they develop their players and the competitiveness of the Big West Conference. After an hour-long conversation, the Matadors offered Okereke a scholarship.

While he was originally torn between CSUN and Coppin State as he felt they were similar both athletically and academically, Okereke chose to stay close to his home in Carson so he can be an example to people who look up to him.

“I could be in a place where I was able to develop, where my family and friends could see me,” he said. “You could start from nothing, because in 10th grade I really did, and end up with an offer if you work hard enough for it.”

Okereke attended King/Drew Magnet High School of Medicine and Science, where his focus was only on academics until he picked up a basketball his sophomore year. The game appears to have come naturally for the big man, as he went on to average 16 points, 10 rebounds and five blocks per game as a senior, en route to being named Los Angeles City Section Player of the Year by Scorebook Live.

“My first step on this team is to play top-down, lockdown defense,” Okereke said about where he sees himself contributing earliest. “I tell everybody where to go, I see the floor really well, I can make great reads. I really do get a lot of blocks because I promise you nobody’s about to dunk on me, I’ll go up and get that with you.”

Off the court, Okereke is looking forward to the food on campus, which he noticed has an A- rating on Niche.com, and just the dorm life in general.

Okereke is coming in at one of the stranger times in CSUN basketball’s history. The Matadors had one of their best seasons in recent memory and secured the No. 2 seed in the Big West Tournament following a four-game winning streak to end the season, but the tournament was canceled before it could begin due to the coronavirus pandemic.

Soon after, star forward Lamine Diane declared for the NBA Draft while guards Terrell Gomez and Elijah Harkless transferred to San Diego State and Oklahoma, respectively. The Matadors have seen the departures of over seven players from last year’s roster this offseason.

The departures open the door for a youth movement led by Gottfried, who just finished his second season with the Matadors. CSUN currently has four commits in the class of 2020, including two highly-touted recruits in Okereke and guard Kailen Rains. Last season is now a part of the past at CSUN, and all eyes turn toward the future of Matador basketball.