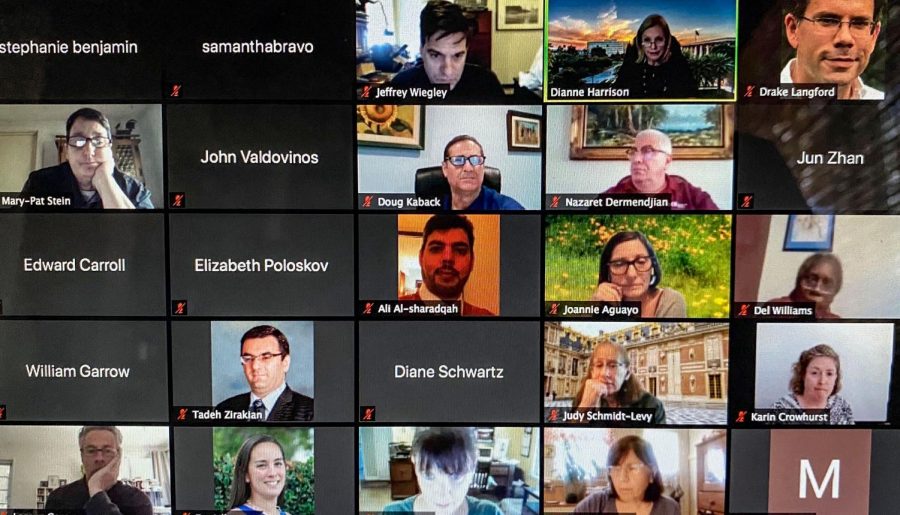 Photo from the Faculty Senate meeting on April 30.

The first part of the president’s report discussed the federal emergency aid and the university. Harrison said the requirements have been evolving since the U.S. Department of Education first announced the funding. Harrison told the senate that the latest requirements exclude undocumented and international students from getting federal relief money.

“We want to make sure we get this right,” Harrison said. “We don’t want to unfairly penalize students or unfairly put the university in a position where we have to repay something. With all that said, our goal is to provide emergency funds to as many eligible students as possible. We’re going to be distributing our portion, which is slightly over $22 million, based on students’ financial needs. Not a very novel concept, but a very important one, because we have many students.”

Harrison described how a student might qualify to receive the aid. She said they have divided the qualifications by three categories based on level of financial need.

“Potentially, we’re looking at more than 33,000 students who would fall into one of these three categories,” Harrison said.

Harrison said the university is also pursuing private donations to provide emergency financial aid for students who were excluded from the federal relief pot, such as DACA and international students.

Harrison said the economic impact from COVID-19 cost CSUN and their auxiliaries about $19.5 million. That includes lost revenue and expenses related to adjusting to the pandemic.

“Some of those funds were for technology for faculty and staff, who didn’t have the proper technology to teach virtually, same thing with students,” Harrison said. “We loaned out hundreds of laptops and WiFi access, as well as emergency pay that we weren’t planning on.”
The second half of the federal relief money, which is just over $22 million, has yet to be distributed to the university, according to Harrison.

It will mainly be used to reimburse the university on its COVID-19 related expenses, Harrison said.

Harrison also shared her lack of confidence in having the necessary safety conditions to return in-person instruction in the fall.

“We’re hoping to have additional guidance from the Department of Public Health by mid-May and a revised government’s budget,” Harrison said. “I am not confident that we will have the safety factors in place to the point where we can have any degree of people back on campus, in August, that’s what I’m saying today, and I can promise you, it can change tomorrow.”
Harrison addressed some concerns from the senate members.

“Because we haven’t faced this before obviously there isn’t a protocol. Wondering if there is any kind of talk of protocol so that if we do have a fall spike, if we have to leave again; our kids have some notion of consistency, what’s going to be in each class,” a faculty member asked Harrison.

“When we had to shift so quickly, everyone’s expectations lowered for what people were able to do, we heard things such as ‘Don’t expect perfection, just do it,’” Harrison said.

“We are never too old to learn new strategies for teaching and there’s a lot of good stuff that could make it better for you and your students,” Harrison said.

“These are really challenging times and of course it’s different sitting in front of your computer,” Harrison said. “Zoom fatigue is real and if it’s noisy and you have no privacy, but I give our students credit for their grip and if they hang in there, finish this semester, finish their degree, they will be ready and even better prepared, for the post-COVID economy and environment.”

Shortly after Harrison’s report, the senate meeting was interrupted by a “Zoom-bomber.” Faculty Senate President Mary-Pat Stein warned the audience that if they interrupted again, she would end the meeting.

“Zoom-bomber” is the name given to people who intentionally interrupt Zoom meetings with obscene language or images.

“I am so sorry everybody, that was somebody that received the link and joined the meeting without permission and I apologize for the language you heard,” Stein said. “I have booted them out and they can’t get back in, but that doesn’t mean we won’t have somebody else who tries to do this. If that’s the case and it happens repeatedly, I will end the meeting.”