May Day protests in the age of coronavirus 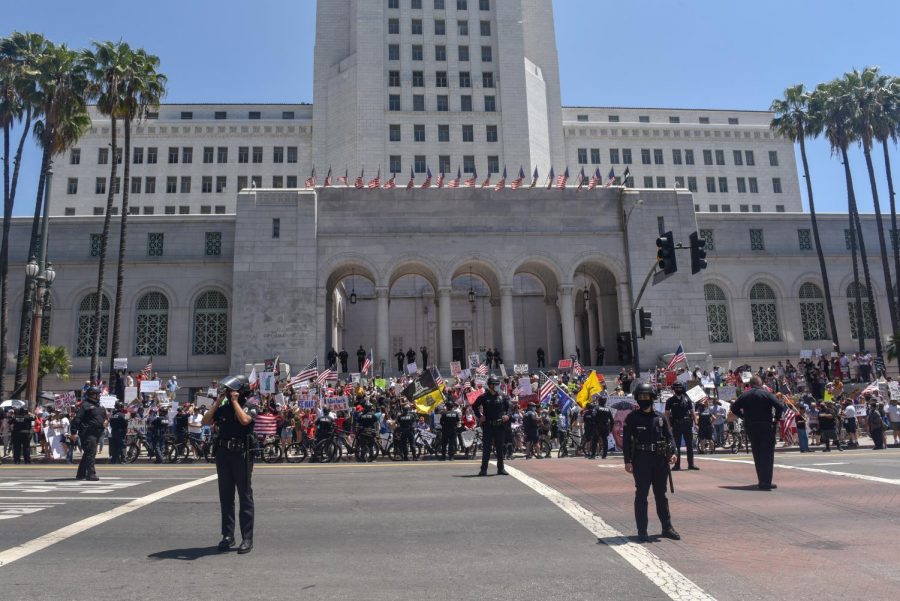 Protestors from the group Open California line up outside of City Hall in an effort to open California's economy.

From Zoom Calls and Caravans to Reopen America Strikes
Since the rise of the Industrial Revolution in the U.S. and Europe, the working class has organized to demand an eight-hour workday and protection rights; it wasn’t until October of 1884 at a convention in Chicago that the Federation of Organized Trades and Labor Unions declared that the first eight-hour workday would be established on May 1, 1886.

During the Cold War, the anti-communist sentiment was rampant in the U.S. and Eastern European immigrants were scapegoated. The immigrants were considered the faces of “anarchy” or socialism, which was un-American –– yet these immigrants made up a significant fraction of the working class.

Immigrants have always been a part of the working-class struggle. In 2006, over 1.5 million people participated in May Day movements across the U.S. where immigrants did not go to work and skipped school for “A Day Without Immigrants” to fight for a fairer legalization process.

This year, due to the coronavirus, May Day served an extraordinary role as people took the opportunity to speak out against the government. Some people were protesting to get the economy open while others were fighting for hazard pay. Although the times are unusual, street vendors, day laborers, grocery store workers, store clerks and many other working-class known as the “essential worker” commemorated the traditional May Day.

Location: Los Angeles City Hall
This year, May Day took a different turn in response to the coronavirus pandemic as frontline workers took to the streets for health protections and other demands. Yet they weren’t the only ones on the street –– Californians up and down the coast rattled against stay-at-home orders in their efforts to “Open California.”

Organized by groups Open California and Humanity first, hundreds of people gathered in front of LA City Hall yesterday, protesting the stay-at-home orders and chanting for California to reopen, flashing signs that read “All lives are essential.”
Parents brought their kids who held signs that read “Open Playgrounds.” People were sporting their Fourth of July gear; between the constant honking of cars passing by and the numerous flags waving in the air, it almost felt like a parade.
Many were against Gov. Newsom’s public safety measures. They held signs with Newsom’s face in a crazy expression, and demanded that businesses reopen because the economy was at stake. Coronavirus didn’t kill the economy, they said, the new legislation did.

Location: East Los Angeles
In East LA, Centro CSO, a community service organization, held a CARE Van for May Day to honor all workers, teachers, students and women. The event saw a participation of nearly 20 vehicles. People with face masks held posters that represented what they were honoring, while remaining in their vehicles. This is the first time the protest was organized in vehicles.

“We just want to get the message out that all healthcare workers, all workers, in general, should get the health care they need especially during these times,” Centro CSO activist Juliana Castellon said. “Another big important thing why we’re out here is that together, the community can fight off anything that is a problem (by) spreading the word. We also want people to be safe and get through this together.”

Based in Boyle Heights, Centro CSO organizes for the rights of the undocumented, quality public education, fights against police abuse and fights for social justice for Chicano people.
The participants assembled down Cesar Chavez Avenue in Boyle Heights, where they honked their car horns and shouted, “Liberation not deportation,” and “Que Viva La Raza,” which translates to “Long Live The Race.” This was the 6th annual May Day event hosted by the organization.

Location: Huntington Beach
Hundreds of protesters gathered in Huntington Beach, defying social distancing recommendations, in an outcry against stay-at-home orders on Friday, May 1, 2020.

Many of the people came bearing support for President Trump. Some showed anger towards Gov. Newsom for closing Orange County’s beaches. Protesters were a part of a group called Reopen America. They rallied on both sides of the Pacific Coast Highway near the Huntington Beach pier, where they chanted amongst each other and cheered as passing cars honked.

The crowd began to seep into the streets, which caused disputes between the police and the people. Law enforcement eventually stationed mounted police to block the protesters.

From the crowd of approximately 500 people, shouts of anger could be heard, but the mounted police maintained peace and the crowd began to quieten.

Location: “Rock ‘n’ Roll” Ralphs on Sunset Boulevard
Nearly a dozen workers protested at the infamous Hollywood grocery store, “Rock ‘n’ Roll” Ralphs, called for better protection for workers after 19 of their employees tested positive for the COVID-19 virus.
United Food and Commercial Workers Union local 770 stated in their April 30 press release, “Community members and grocery workers will hold a social-distancing safe rally and caravan at the Rock and Roll Ralphs in Hollywood in support of essential grocery workers who are calling for better safety protections to stop the spread of COVID-19 among workers and the community.”
This came after 19 out of 129 employees tested positive for the virus. However, this number jumped to 21 Friday afternoon. This is the most amount of tested positive cases at a workplace LA Public Health department has reported.
Dozens of people drove up the street honking in solidarity, with signs on their vehicles that read, “Essential not disposable,” and “Thank you, essential workers.”
Refusing to speak to the press, protesters stood in solidarity –– their signs said enough.
The UFCW 770 released a statement early Saturday stating, “Due to the pressure from UFCW Local 770 members, Ralphs/Food4Less announced late last night that it will offer testing to all of its workers.”

Location: The Getty House
Hundreds gathered outside of LA Mayor Eric Garcetti’s house in a car protest to tell the mayor to stop evictions and put a halt on rent payments momentarily due to the coronavirus pandemic.

The protest, titled “No rent, No vacancy: May Day Protest At Garcetti’s Mansion,” was organized on Facebook by Sunrise Movement LA, Street Watch LA, Ktown for All, NOlympics LA, and L.A. Tenants Union.

Many cars circled around the blocks of Sixth Street and Irving, while holding out posters and honking their car horns to create commotion outside Garcetti’s home.
“Mayor Garcetti is failing millions of tenants in LA. He needs to cancel rent. He needs to use hotels to provide housing to ALL unhoused residents,” the Facebook page read. “ But he’s not, because he’s a coward who serves the landowning class.”
While the streets filled up with cars, protestors were also on the sidewalks holding up signs, banners and posters with messages for the mayor.
“Fight, fight, fight housing is a human right” was being chanted by many of the protestors. Along with the chants, a mariachi band played music with their instruments while walking up and down the street.
Police were standing guard in front of the house, sidewalks and the corners of the crosswalks to make sure things were peaceful. Police were also patrolling on bikes, riding next to the cars to ensure traffic was moving. Parking enforcement officers were at the intersections directing the car and foot traffic.
Toward the end of the protest, some of the protestors in cars were given written warnings because of the excessive noise from the honking.