Obama rightfully wins the Nobel Peace Prize. After the dust cloud of condemnation and confusion settles, one realizes this was the right decision 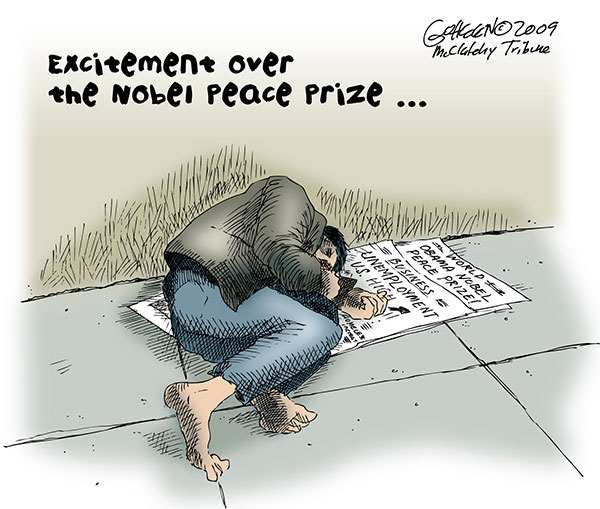 On Friday morning the news was announced that President Obama had won the Nobel Peace Prize. I felt no anger, excitement or pride. Well, at least not at first. I found myself in a complete state of confusion. The fact that Obama won this amazing international honor was a shock.

The condemning and questioning ensued across media outlets and from pundits. I needed to find some answers myself.

As the President of the United States, Obama finds himself in the middle of some very heated relations and compromising situations.

He aggressively advocates for a nuclear weapons free world and meets with some of the world’s most feared leaders who harbor and test nuclear weapons.

Between Iran, Iraq, Afghanistan, North Korea and Venezuela … well to name a few, he has engaged with the leaders of these countries to establish a safe and peaceful relationship with the world. It is far from peaceful, but progress is definitely a word that is no longer alien when discussing the relations with Iran and North Korea. His personal visitations were certainly alien to former President George W. Bush.

America’s image in Europe has been substantially raised since Obama’s inauguration. Relations with Europe in the last decade have been par at best. These are our closest allies in time of need. Obama has worked hard to remind them that we are brothers and have each other’s backs.

Obama believes that he has the confidence to make great change with his personal relations. His personal relations and visitations can transcend the rifts of the past and create a bond that eventually creates trust. It sounds dangerous and hopeless, but Obama’s willingness and risks he takes when visiting the leaders of our “so-called” enemies can be the solvent to miscommunication and reparation.

The Nobel committee chooses a recipient based on the advocacy and efforts to create a strong fraternity between nations. Obama fits this description well.
In any case the last year has been dismal on many global levels. But, the one thing that we do find as a result of Obama’s reach and push for international diplomacy is that it surpasses other leaders around the world.

Today, there aren’t many leaders promoting and advocating for peace. One should take note that Obama is an exception.

He makes great efforts to be ever-present in the name of the global community and instill trust with our neighbors on this planet.

Be proud as he has made great strides. Although we see no tangible results, his advocacy has been well noted.

If anything, he deserves it for his efforts. And yes, he has only been at work for nine months, but has more than three years to implement them and change the history books.

Obama has joined the likes of Nelson Mandela, Yitzakh Rabin and the Dalai Lama.

One might ask how Obama has found himself in the presence of these great peace laureates. His results pale in comparison, but Barack Obama is a persistent man, and certainly can be a repeat recipient if he continues his peaceful, personal missions.