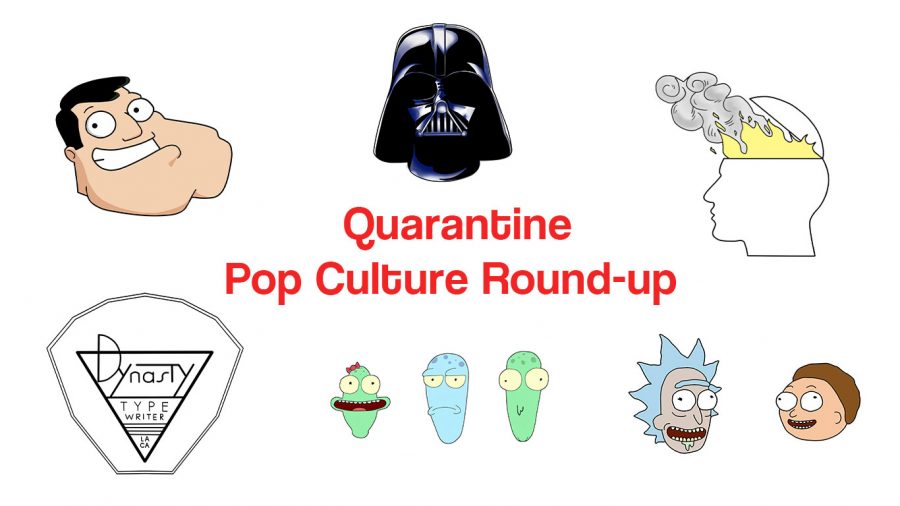 Weekly A&E Quarantine Round-Up
During the time of quarantine amidst the COVID-19 pandemic, creators have taken over social media platforms trying to cure your boredom. With so many things happening, you may have missed a few exciting things that could really pique your interests. Here are some posts that you may have missed from this week, and a few upcoming virtual live performances this weekend.

Sunday, May 3 – Rick and Morty

Fans of the beloved mature sci-fi comedy show rejoiced in the fact that the show finally premiered for the second half of their fourth season. “Rick and Morty: The Other Five” was revealed on April 14 via Adult Swim’s Youtube channel, and it featured titles of the episodes: “Never Ricking Morty”, “Promortyus”, and “The Vat of Acid Episode.” The first episode of the final five, “Never Ricking Morty,” premiered on May 3. Some say it is the best episode of the series.

Every Star Wars fan around the world celebrated May 4, or as Star Wars fans call it, “May the 4th Be With You day, as social media was flooded with memes, old photos, and memorabilia about the highly successful franchise. Even the late actress Carrie Fisher’s daughter, Billie Lourd, posted a picture of her mother dressed in Princess Leia attire with the caption that read, “My heart goes out to everyone who has lost someone they loved during this beyond surreal time.” News also came that Taika Waititi has been signed on to direct a Star Wars movie.

Tuesday, May 5 – American Dad and The Weekend

Fans of Seth McFarland and The Weeknd got a double dose of their favorite things when The Weeknd made a cameo in the adult sitcom animated show from the creator of Fox’s hit show, “Family Guy.” In the episode, Stan Smith kidnaps The Weeknd and chaos ensues, which includes a musical number and a plot line of Stan’s daughter, Haley, trying to sleep with the singer.

If you’ve ever wanted to write a comedy show or pitch a show idea to studios, this could be your chance. The Dynasty Typewriter Theater in LA is hosting an online class presented by Brent Forrester, an Emmy award-winning writer and showrunner. The class starts on Saturday May 9, and will run through June 13. Classes will be held from 2 p.m.-4 p.m.

ZORA Magazine, a Medium publication dedicated to women of color, tweeted about their story series on how the constant pressure to perform is weighing women down. Whether it be being productive before the quarantine or overperforming to stay productive during the quarantine, society has made it so that we are all our own personal brands 24/7.

When it’s Friday, that means new material drops –– music, shows, or books. This week, two shows dropped for all of us to binge watch. Season 2 of the hit drama/thriller show, “Dead to Me” became available on Netflix. The show stars Christina Applegate and Linda Cardellini. The other show is on Netflix’s competitor, Hulu. The show “Solar Opposites” is from creators of global phenomenon “Rick and Morty,” Justin Roiland and Dan Harmon.