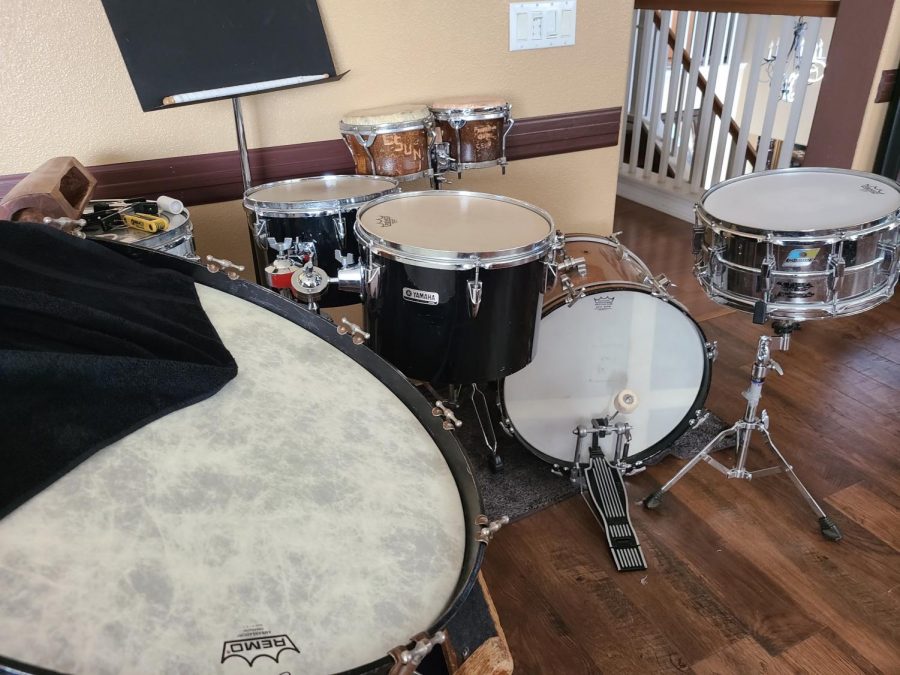 Drums were provided by the CSUN's Music Department

The sudden shift to online teaching has brought unprecedented challenges to students and professors alike. The pandemic forced all learning online in mid-March and instructors had to come up with creative projects and activities to see what worked best for their students.

While some basic functions like sharing monitor screens were easily accomplished on the online video conference program Zoom, the department of music faced a steep learning curve.

One of the biggest issues with teaching music through Zoom is the platform’s latency. Orchestra classes require students to play in unison by taking cues from other musicians and a director. Therefore, students had to take a different approach to online learning.

According to the Music Department Chair John Roscigno, it has been difficult to hear notes or the percussion from an instrument with audio played through laptops.

“A lot of what the music students do is performing ensembles, they’re constantly forming large groups, so we had to really come up with some crazy ideas of how to keep the students interested and also to make it worthwhile,” Roscigno said. “We were able to somehow cover what happens in large groups in rehearsals and performance online in some way, somehow give them the material or at least find something related to that, that would help them move forward.”

The university provided eight music students with keyboards from Keyboard Concepts, a local chain of piano sales and rental stores, to continue their courses. According to Roscingo, the school worked out a special cost arrangement with the store to ensure students get the digital keyboards. Students do not have to pay a cent, as the university has covered the costs.

“Our dean’s office said ‘Listen, let us know what you need’ and basically the amount was maybe two or $3,000 and they said ‘No problem, we’ll put that through,’” Roscigno said.

For students who are composers and need specific software programs for assignments, Roscigno said CSUN provided them with free memberships to software usually used in class.

“Apple said, ‘Okay, free for three months.’ Then we thought ‘Oh, this is great, now we can get through the semester,’” Roscigno said.

Anahí Sayra Del Río, fourth year percussion performance student at CSUN, was able to check out instruments from the music department to complete her semester remotely.

“We’re going to be able to keep those until we’re allowed to go back on campus, I’m not sure for how long that is, but it is really nice to actually just be able to get up and practice instead of having to go to a school and set up there and make sure no one else is using them,” Del Río said.

Since classes shifted online, Del Río has been using Facebook Messenger to connect with her private instructors. Del Río said although virtual instructions have been easy, poor connections or interruptions occur frequently.

“So a lot of it is with the online lessons, I just have to be a lot more accountable for my progress and my mistakes,” Del Río said. “I can imagine it is a lot harder if you’re a freshman and you’re barely starting off with lessons, and it’s a lot more important to have that feedback in person.”

Del Río said she is not worried about losing the in-person experiences in the fall semester. Her biggest assignment is her senior recital and putting together an hour-long concert. In order to graduate, she has to take private lessons, participate in the bands and take one music class.

“Right now I actually have all the instruments and the music I need in order to prepare for that recital,” Del Río said. “So it’s just a very straight path for me.”

When students were told classes were going to be moved online, the first issue the music department had to tackle was accommodating student pianists.

“What are the pianists going to do?,” Roscigno said. “If they’re practicing on campus all the time, if they’re students, let’s say they’re international students, they’re living in an apartment without an instrument, what are they going to do?”

“They helped us rent eight keyboards and they were delivered directly to the students’ apartments for three months,” Roscigno said.

Roscigno said in addition to the keyboards, the university was able to loan students instruments they needed for the remainder of the semester.

Roscigno said all auditions were completed in January and February, however they are unsure what the fall semester will be like for auditions.

“We have to wait until the summer to figure out what’s online, what’s not online, when we can meet face-to-face, because we have the real audition, to play in specific ensembles in the department,” Roscigno said. “But if we’re told by the university, there is no way that we’ll open, we have to figure out how to do things online.”

Roscigno said he is worried students will take a gap year if classes continue online and things don’t get back to normal.

“We’re afraid of that, so it’s really up to the faculty to come up with really super cool projects or things to do online,” Roscigno said.

Roscigno said students have been using social media to perform together in place of performing in a classroom. Instructors have turned to alternative methods, such as pre-recordings, instead of lecturing.

“You’ve probably seen online a number of music videos that people are doing, where they’re recording in their own homes, and then someone edits the tape and it seems like they’re all performing together, that’s kind of a big thing on social media right now,” Roscigno said. “We’ve had some ensemble directors come up with creative ideas to do things like that. That doesn’t take the place of actually performing together in rehearsal. Performance’s take a whole new direction in that they basically have to play to a click or shank and then record themselves and someone else puts it together.”

To be able to perform on campus again, Roscigno suggested organizing smaller group chambers where students are still able to rehearse while maintaining social distance.

“We will probably need to figure out a way to have the performing chamber groups of players of four or five players, in the case of a group of 40 can be split in half,” Roscigno said. “For the social distance situation where the only way can meet. Then we’ll have two orchestras. We’ll split the 40 into two and try to find extra rehearsal space, because the students need to be able to see each other and play together.”

Roscigno said students don’t have the funding to purchase a good microphone, so they’re trying to provide those resources for students.

“Most faculty members are doing online lessons, but we have technological needs,” Roscigno said. “So I think if they weren’t following the fall, we’re going to have to purchase good microphones for any faculty or students that would like to not just do the lesson directly on their computer or phone but actually have a good mic quality microphone because we’re having issues with some people having sound problems.”

Music lessons have been taking place on Zoom or Facebook Live, however Roscigno said that continues to be a struggle.

“I think that it would be easy to meet on campus face-to-face, one-on-one lessons. You could separate by six feet or ten feet, as long as you’re in the same room hearing what it actually sounds like,” Roscigno said. “I think that’s something that’s very doable. So we would push for anything that would involve fewer people.”

“I think the university in general wanted to immediately help students as much as they could. It seems to me that because I’m not hearing many complaints from students by email, I know they’re not that happy some of the time, I feel like we’re going to make it through this semester, with not too many people who dropped out so hopefully, we can figure out something for the fall to keep everyone interested,” Roscigno said. “The faculty has to really make sure that they kept a hold of the students and not let them slip through the cracks.”