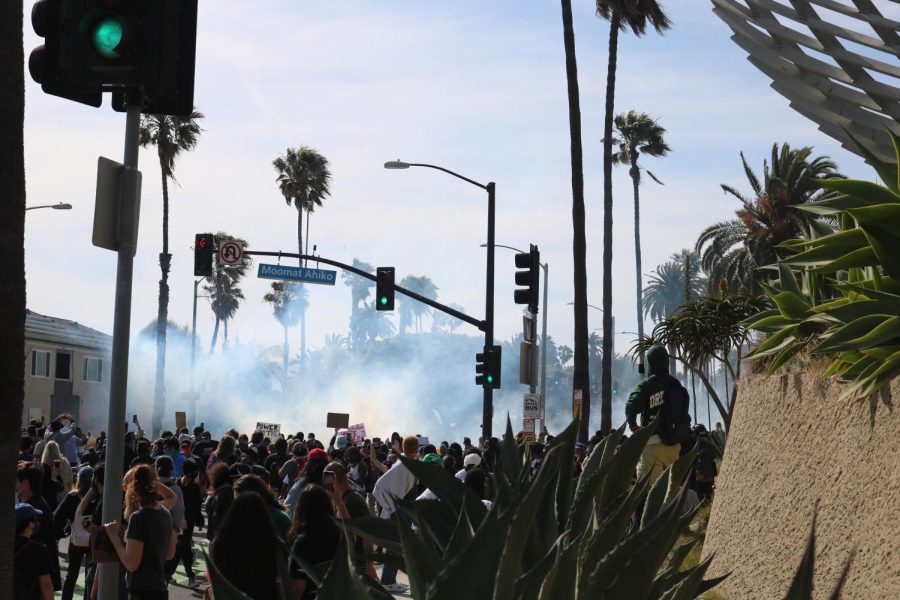 As protesters linger past curfew, police launched tear gas in hopes to disperse the crowd.

SANTA MONICA — Protesters continued to march peacefully in Santa Monica and downtown Los Angeles to protest police brutality and the killing of George Floyd, while looters rushed in and caused havoc.

The city of Santa Monica declared a city-wide 4 p.m. curfew to get people off the streets.  Los Angeles County has been under a 6 p.m. curfew for the past two days.

At around 4:30 p.m., police launched tear gas into the crowd at Santa Monica as an attempt to push the crowd northbound, away from the promenade.

Prior to the use of tear gas, the National Guard warned protesters that action will be taken if they do not move north in five minutes. Protesters retaliated by throwing eggs, water bottles and rocks at police. When the police shot less-than-lethal rubber bullets and tear gas, the protesters made their way to Santa Monica City Hall, which was already blocked by police.

Earlier in the day, protesters peacefully marched down Ocean Avenue while holding signs with messages calling for justice for George Floyd and condemning police brutality. They were halted by police officers and National Guard members on the intersection of Colorado and Ocean avenues around 2 p.m. According to police, this was to stop the further damage of storefronts and local businesses.

Protesters faced the officers and chanted, “No justice, no peace. Prosecute the police.”

“I’m out here to show my solidarity with brothers and sisters on the front line in Minneapolis and in all the cities across America that are over-policed and underserved,” Lewis said.

The protest was peaceful until the curfew. Protesters eventually dispersed, while looters converged on the Santa Monica businesses.

While officers blocked the Third Street Promenade, looters broke into the surrounding businesses. Shattered windows left merchandise exposed, and buildings and storefronts were covered in graffiti.

Santa Monica Police Chief Cynthia Renaud announced early Monday that more than 400 people were arrested under the suspicion of looting and burglary at around 7 p.m., three hours after curfew, on Sunday.

The city of Santa Monica announced a 1 p.m. curfew for businesses and 4 p.m. city-wide curfew for Monday.