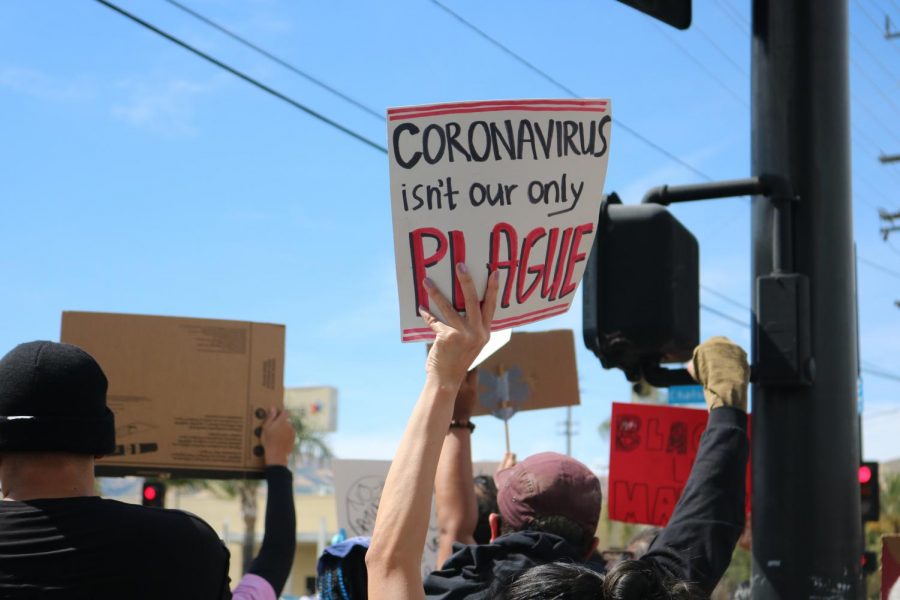 Protester holds up a sign that says "Coronavirus isn't our only plague."

GRANADA HILLS — Young people and families gathered on the corner of Zelzah Avenue and Chatsworth Street to show their solidarity peacefully on the sixth day of George Floyd protests.

Around a hundred people of different ages and backgrounds chanted “Black lives matter” and held signs with messages against police brutality such as “I can’t breathe” and “Coronavirus isn’t our only plague.”

Onlookers cheered on the crowd and drivers held signs and honked in support as they drove by.

Fluke Fluker, a local activist and teacher, explained what needs to happen in the future.

“I’m sick and tired. Enough is enough. Three more arrests need to happen. I’m tired of Black lives being snubbed. We’re here in unison, as one people, as one America, to say enough is enough,” Fluker said.

Julie Baca-Williams, a Granada Hills resident, was at the protest with her two daughters. They held signs that read “Charge them all” and chanted with the crowd.

“I’m here to protest the injustices that continue to happen with our police departments on the local and state level and for justice for all people, Black and every color. This needs to stop,” Baca-Williams said.

Jennifer Brown, a CSUN film student, was doing her part protesting, but she also tried to mitigate the spread of the coronavirus by giving out hand sanitizer to the crowd.

“Everyone is giving out water and snacks, but I didn’t see any hand sanitizer,” Brown said. “I didn’t want people to be out here and not contribute because of the virus.”

All of the protesters wore masks and facial coverings due to the pandemic. Brown said she felt that handing out hand sanitizer would help the protesters’ morale and put their minds more at ease.

“I realized that it was very dangerous for us all to be out here together,” Brown said. “So I put on some gloves and started giving out hand sanitizer because it’s the least I could do.

At around 3 p.m., a public safety alert notified protesters of Los Angeles County’s 5 p.m. curfew. Nearby business owners, with help from volunteers, began to board up their businesses to protect them from looting.

“There is no looting here yet, but as the day goes on it might get worse,” said Nicholas Knapp, a volunteer. “We are trying to prevent people from breaking in and looting and burning like we’ve seen on the news.”

Knapp, along with a handful of men, helped put up plywood slabs across businesses’ windows down Zelzah Avenue and Chatsworth Street. They boarded up the buildings as a precaution, as the store owners still feared looting was real amongst the store owners.

The protesters continued to demonstrate peacefully until the city-wide curfew took effect at 5 p.m. By 5:15 p.m., nearly all the protesters had peacefully left the area without any police involvement.