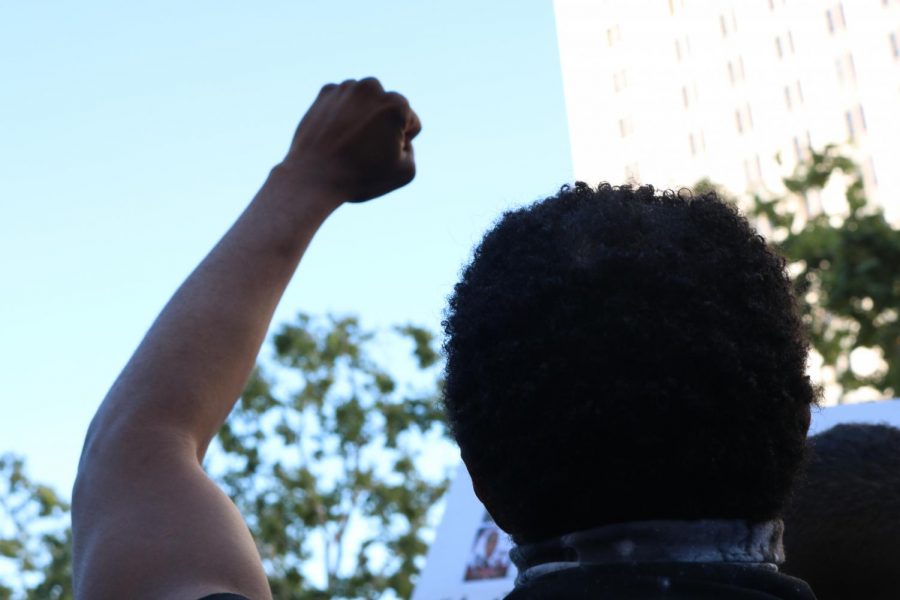 Black Lives Matter protester holds up his fist as protesters chanted "Jackie Lacey must go" in the background.

The protesters made their way north to the L.A. County Hall of Justice on Spring Street.

Members of the National Guard and police officers stood guard atop the Hall of Justice’s steps and on the rooftops of surrounding buildings.

Black Lives Matter organizers and other activists delivered speeches to the crowd.

“The Hall of Justice that we paid for is protected by the LAPD and the National Guard, by the people who own it. Does that look like justice to you?” said Melina Abdullah, the co-founder of the L.A. chapter of BLM.

One of the speakers was Fouzia Almarou, the mother of Kenneth Ross Jr., a 25-year-old Black man who dealt with mental illness, who was fatally shot by Gardena police in 2018.

“We live in the killer-cop capital of the world. My son was killed in the Crenshaw mall and Jackie Lacey won’t do anything about it,” Almarou said.

Last year, Lacey’s office decided not to file criminal charges against the officer who shot Ross,  concluding that he acted in self-defense.

Shortly after 6 p.m., Mayor Eric Garcetti announced in a press conference that he would not be increasing the Los Angeles Police Department’s budget as he had proposed last month.

The mayor announced $250 million in cuts to city departments, including the LAPD, to reinvest in programs for minority communities.

The announcement comes after a week of activist demands for the defunding of the LAPD and condemnation of Garcetti’s budget, which proposed a spending increase for the LAPD while other city departments had their funding cut.

The crowd of protesters outside City Hall and the Hall of Justice shrunk by more than half in size by 7:30 p.m.