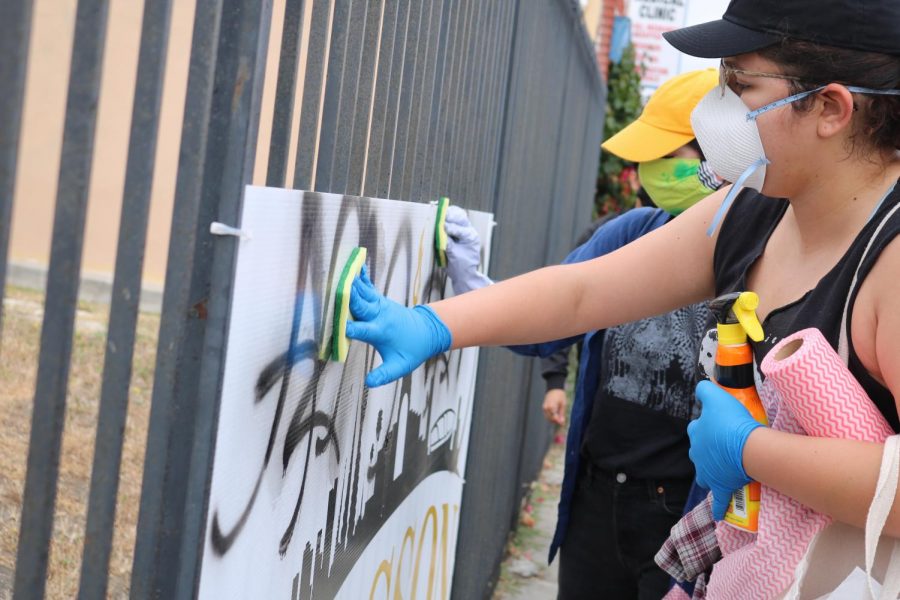 Participants wipe graffiti off of a sign in South Los Angeles

SOUTH LOS ANGELES — A group of over 100 people gathered at a Jack In The Box parking lot at West Florence Avenue and South Western Avenue in South Los Angeles to participate in a community clean up event and support Black businesses on Friday morning.

The group cleaned a one-mile stretch of Western Avenue. They began at Florence Avenue and worked their way south on Western Avenue toward a grocery store parking lot on Manchester Avenue, where five Black-owned food trucks awaited the participants.

“What my position is in this protest is actually taking some action, and cleaning up the community while we’re protesting,” said Dime Jones, one of the event’s organizers.

The event took place just around the corner from Florence and Normandie avenues, ground zero of the 1992 Los Angeles riots which erupted over the acquittal of four LAPD officers who were videotaped brutally beating Rodney King, a Black man.

“Every day I see how my community was affected by the 1965 and Rodney King riots and how we still have yet to recover. Instead of protesting and walking I wanted to protest and clean,” Jones wrote in an Instagram post that promoted the event.

Organizers made it clear to the participants that there would be no chanting or traffic disruption.

“I feel like us chanting in a neighborhood that already faces police brutality and poverty … it’s just not a good thing. So I wanted to do something good while people feel a part of something,” Jones said.

The event organizers provided participants with gloves, rakes and trash bags. Participants picked up trash and wiped down graffiti as they made their way down Western Avenue.

The event ended at a Ralphs parking lot, where people filled the bed of a pickup truck with stuffed trash bags and purchased food from a number of Black-owned food trucks.