A message of hope from AS Vice President Deion Joseph Turner 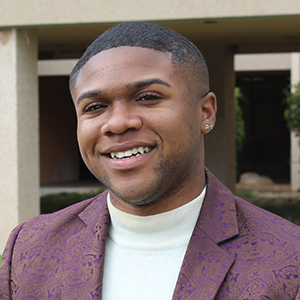 Hello everyone, my name is Deion Joseph Turner and I am the CSUN Associated Students Vice President and former president of the Black Leadership Council. I am humbled to be able to offer words of hope and listen to all of the ideas and plans that our community would like to see. I want to share with you a few words as I wrote the other night while trying to gather my thoughts.

“When they go low, we go high.” These were the words that Michelle Obama so gracefully stated at the Democratic National Convention in 2016. Who would think that almost four years later that as Black Americans, we would need this statement the most? As I have conversations with my mom about George Floyd’s death, I’m only really able to say, “He didn’t know that was his last day, his daughter didn’t know that she wouldn’t see her father again and his family didn’t know that they wouldn’t see their George again.”

But what troubles me the most is that I don’t think I can say that he didn’t spend a portion of his morning each day asking himself, “Will I make it through this day?” I say this because as a Black male, the odds are really never in our favor. The ball normally isn’t in our court, and we don’t have the privilege, again I say privilege, of feeling 100% safe at all times.

I don’t think I can say that George Floyd didn’t have conversations with his sons about how to deal with the police, and not just because I didn’t know him personally but because it’s a speech that is infamous in the Black household: “Hands on the dashboard. If they ask you for your license and registration, notify them where it’s located. Never turn your back and keep your hands visible. Don’t question them, don’t get an attitude with them, and keep conversation short. Refer to them as Sir or Ma’am, so that they don’t feel inferior and for as long as you speak to them, keep a smile on your face.”

It’s so interesting to me because I wonder what the slaves told their daughters when the master wanted them to come into the house to prepare for a brutal rape. I wonder what those in the civil rights movements told their kids when they got on the bus and were targeted by the police. I wonder why the message of accepting hurt is something that we are conditioned to have to do in the Black community.

I started my remarks off with Michelle Obama’s quote because I want to be sure we know that no matter how low racists go, we should continue to fight for justice together and rise. I want every Black person and every ally to demand change, to demand significant change. To be a champion for their communities. To those my age, we are the next generation of educators, of doctors, of lawyers, of council members, of law enforcement and so many other careers and jobs that make up the world.

We have the power to make those who don’t want to get on the train of social justice and love to be the outliers to be the minority. We, as Black people, should no longer have to be the minority when it comes to anything because our allies will have raised children that understand the contributions of African Americans to their communities, but further than that, the next generation of children will find it disgusting that previous generations made negative judgments based on an individual’s complexion.

The 1996 California proposition 209 made people stop looking at race and this is where we started hearing, “Oh I don’t look at race.” But I don’t wanna hear, “I don’t see color.” I want to hear, “I see your color and I recognize your struggle and I want to champion for you. I see your color and I thank you for the contributions of your ancestors such as the Home Security System, the Three Light Traffic Light or automatic elevator doors. I see your skin, your beautiful skin and I see resilience.”

As your Associated Students Vice President, I ask that you see my color, that you see and recognize and resonate with my struggles, and that you see resilience. Our campus has serious work to do in creating safe spaces for our Black community; we have an overwhelming responsibility to the success and retention of our Black students, also the prioritization of recruiting Black faculty and staff.

As I close, I want you all to know that my mom always says “Deion, this too shall pass.” This isn’t our only moment; our moment is forever. Don’t be quiet, don’t back down. Be bold, be strong, be courageous, command the room, demand respect and always fight for justice. On behalf of President Merida, and the whole Associated Students team, we hear you, we support you, we love you.