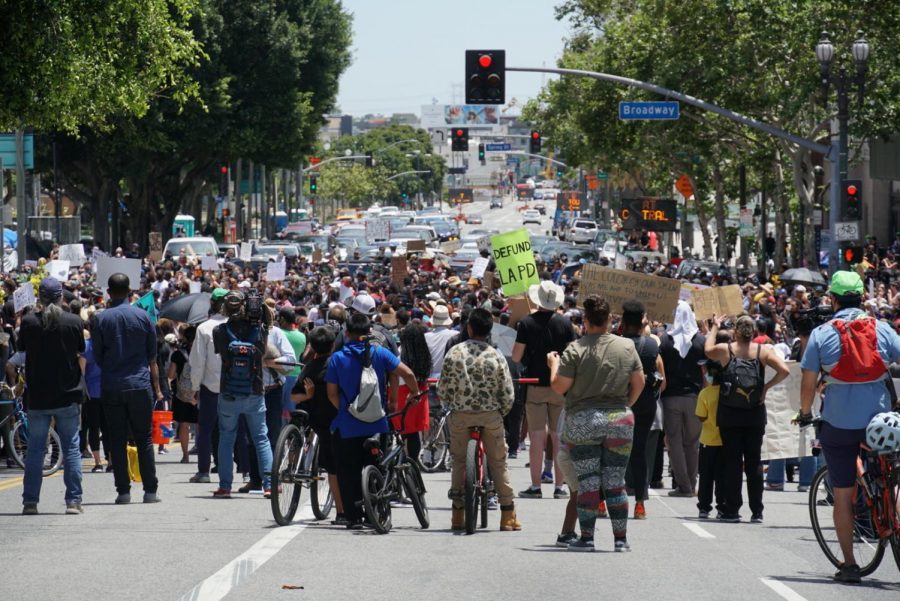 Crowds gather on the streets of downtown Los Angeles to commemorate George Floyd.

DOWNTOWN LOS ANGELES — On Monday at 12 p.m., mourners gathered in downtown Los Angeles to pay their respects to George Floyd.

“We wanted to come out and show strong support for Black Lives Matter,” said Reverend James Thomas, one of the clergies at the protest. “We as clergy stand firm behind the demands that have been made here today, which are to prosecute killer cops and defund the police.”

The memorial service was organized by Clergy and Laity United for Economic Justice with Black Lives Matter Los Angeles.

“We’ve seen a lot of different types of protests, so it’s good to go out every day as much as we can,” said Molly, a protester at the memorial service. “It has been great to see the variety of different ways people are supporting the movement.

Beginning at 8 a.m., car processions from the San Fernando Valley, Santa Ana, Long Beach and South L.A. made their way to downtown Los Angeles, where the memorial service was held at 12 p.m.

A caravan made up of vehicles and protesters made their way through downtown L.A. and eventually congregated at L.A. City Hall. The caravan included multiple hearses carrying unoccupied coffins to symbolize Floyd and other police brutality victims. People arrived with floral arrangements to honor Floyd and other Black victims of injustice.

“It’s a cry directed towards the system,” said Jason, a protester at the demonstration. “It’s not just the cops. It’s the jury, the DA and the judges. The system shows that the darker your skin is, the harsher the punishment is.”

The group of around 500 attendees included people of all races, as well as mothers of Black men who had lost their lives due to police brutality.

The gathering was entirely nonviolent and conveyed a message of unity and community amongst those present.

“(Looting) is something we don’t want because we are all part of the community and want to work on a solution,” said Gabriel Salazar, a protester. “We want to show the difference between doing it peacefully opposed to the other ones which are destroying everything.”

Salazar, 43, echoed a sentiment shared by other protesters — that these demonstrations can start a dialogue with those in charge of the police department, which would lead to better training for officers along with other reforms.

“As an individual, you need to go (protest) as much as possible because it reminds people that we have power,” said Hannah, a protestor at the service. “If you go and see a small group of people, you might feel shy and not want to go. But if you look out your window and see thousands of people marching, that gets the momentum going and gets more people to come out.”