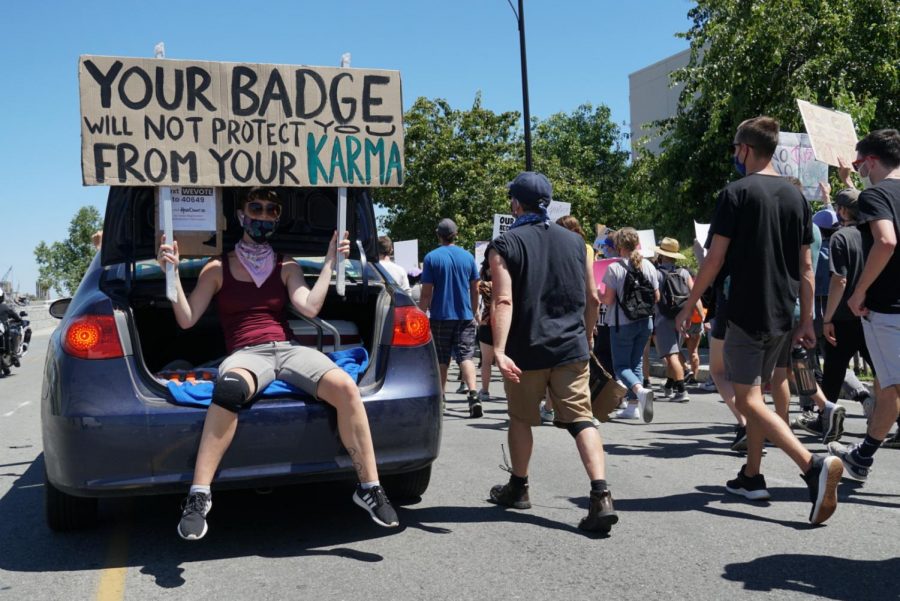 Sara Tomko, a protester, holds a sign while sitting in a car trunk as protesters march on North Victory Place toward Burbank City Hall.

BURBANK — Thousands showed up for another day of protest in Hollywood on Sunday to demand for the defunding of the police and the removal of Los Angeles County District Attorney Jackie Lacey.

Sunday’s protest, which also honored victims of police brutality, is part of the nationwide movement to defund police departments. The movement scored a win early Sunday as a majority of the Minneapolis City Council, which presides over the city where George Floyd was killed by police, announced it would back a move to disband the city’s police department.

At around 4 p.m. protesters gathered in front of the Capitol Records building in 80-degree heat. Black Lives Matter Los Angeles partnered with popular rapper YG and Kendrick Sampson of BLD PWR to organize the protest.

Before demonstrators began marching, Sampson and YG said some opening words. YG also played his new single, “FTP,” and danced with protesters. Sampson delivered a speech to the protesters.

While BLM-L.A. has called for defunding of the Los Angeles Police Department for the last five years, the national outcry sparked by Floyd’s death, as well as the deaths of Ahmaud Arbery, Breonna Taylor and more, has given the effort new momentum.

Protesters in L.A. gained some ground last week when Mayor Eric Garcetti put forth a plan to cut and redirect $250 million from the city’s budget — with up to $150 million in cuts to the LAPD budget — to programs for the city’s impoverished and minority communities.

The cuts scaled back Garcetti’s original proposal for a 7% spending increase for the LAPD. The department still accounts for nearly half of the city’s budget under Garcetti’s proposed cuts, which are still a far cry from protesters’ and activists’ demands for the total defunding, if not abolishment, of the police department.

BLM-L.A. and other local activist groups are championing a city budget proposal they are calling the “People’s Budget,” which proposes a reduction of the LAPD’s portion of the budget to 5% while allocating nearly 70% of the budget to “Universal Aid and Crisis Management” and “Reimagined Community Safety.”

Protesters also continued to call for the resignation of Garcetti and Lacey, who activists said has failed to prosecute “killer cops.”

“Getting rid of Jackie Lacey is all a part of a corrupt system that needs to change and be dismantled so while the catalyst is George Floyd he’s just one of the thousands,” said Jeff Atkins, a protester.

Organizers sat in the back of a pickup truck surrounded by protesters as it drove down Hollywood Boulevard. The truck stopped at the intersection of North Highland Avenue and Hollywood Boulevard, where BLM activist, Joseph Williams, recited BLM’s demands.

“We got to defund the police, prosecute killer cops and reinvest in our community,” Williams said.

The protests concluded around 6 p.m. with a message from BLM co-founder, Melina Abdullah.

BLM-L.A. will continue their protests next week. They will meet at Leimert Park at 10 a.m on Monday for a George Floyd memorial. On Wednesday, they will protest against Lacey at the Hall of Justice.

Around 60 people marched from Burbank Empire Center to Burbank City Hall to show their support for the Black Lives Matter movement on Tuesday.

Benjamin Abiola, the protest’s organizer, explained why he felt it was necessary — now more than ever — to use his platform to spread knowledge and awareness about violence against Black people in this country.

“(Racism) is something that has been around since before I was born,” Abiola said. “And if not now, when? This is the perfect time to seek real change and I couldn’t just sit back and watch that happen. It would be a shame to sit through this historic year and not come out with real change.”

Protestors met around 1 p.m. at Burbank Empire Center on Empire Avenue. After a short speech from Konstantine Anthony, a former actor who is running for Burbank City Council, the protesters marched from the shopping center over to Burbank City Hall.

The demonstrators brought signs and megaphones to spread awareness of the racial injustice facing the Black community. The protesters stopped briefly on the Olive Avenue overpass and waved their signs at the Interstate 5 traffic below them.

One sign read “Black love, Brown pride,” affirming the diverse support the movement has gained across the country.

Stacy Timothy, a CSUN student, said allies could help the movement by continuing to voice their support.

“It’s as little as posting on your social media and being out here with Black people marching,” Timothy said.

Timothy wants people to understand that as a Black woman, she won’t stop marching until she sees a change in America.

Around 3:30 p.m., protestors made it to Burbank City Hall where they chanted, “What do we what? Justice! When do we want it? Now!”

Right before 4 p.m., the crowd returned to the shopping center where the protest began, and gradually dispersed.