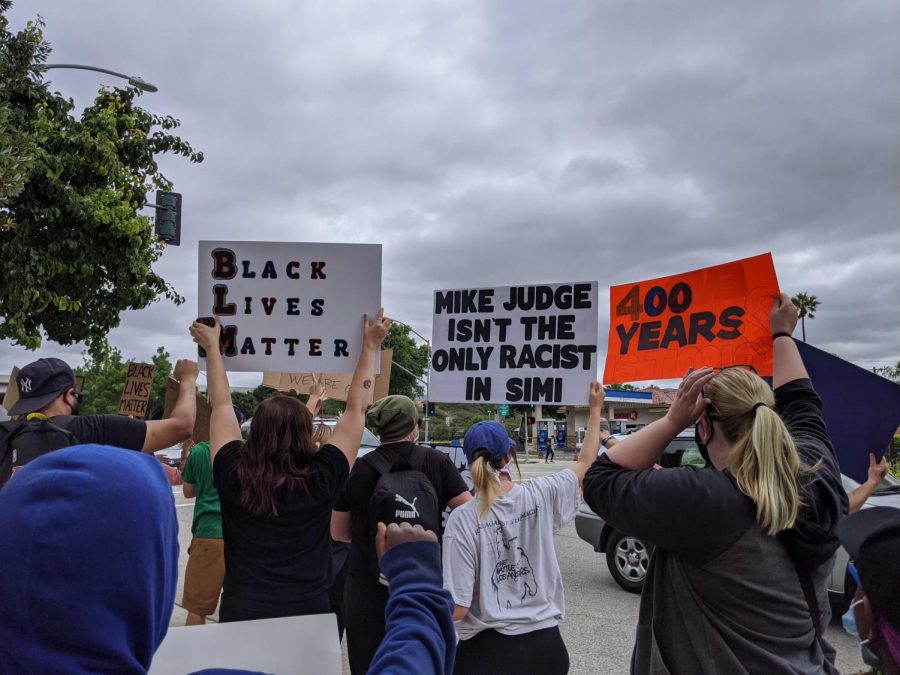 Protesters hold signs as they march down Alamo Street toward the Simi Valley Police Department.

SIMI VALLEY — Protesters in Simi Valley showed support for the Black Lives Matter movement and called for the resignation of Simi Valley City councilmember Mike Judge as they marched from the intersection of Cochran Street and Sycamore Drive to the city’s police department.

Judge, a 30-year Los Angeles Police Department veteran, shared a meme with the text “Wanna stop the Riots? Mobilize the septic tank trucks, put a pressure cannon on em… hose em down…. the end.” on his personal Facebook page on Monday. He captioned the post, “This is brilliant, it will also enforce the mask rule!!”

There are two petitions calling for Judge’s removal from the city council, according to the Ventura County Star. The petitions, created by Katie R and a Simi Valley resident on Thursday, pointed out that this wasn’t the first time Judge has shared inappropriate content on his Facebook and Twitter accounts.

Jarome Ricard, a Simi Valley resident and alumnus of CSUN and Cal State Long Beach, said he could not stand sitting around not doing anything after learning about Judge’s post.

“Mike Judge’s comment about using [septic tank] hoses to shut us up is a racist comment,” said Ricard, who drew a connection between Judge’s comment to the ’60s when high-pressure hoses were used on Black people in the South. “He needs to resign, we need to do something about that too.”

He also said he was proud to see many young people at the protest because it concerned their future. As a retired L.A. Unified School District teacher, he considers himself an advocate for the younger generation.

Amongst the crowd of protesters, one of the signs read: “This is for my generation.”

Kaylin, 14, who has a Black father and four Black siblings, was holding the sign. She said she came out to show her support for the Black Lives Matter movement.

“I wanted to come out to help my future because I’m going to be here for a long time, and I want things to be better,” she said.

Kaylin also talked about her own privilege as a mixed Black person.

“I am very privileged, personally, because I don’t pass as a Black person even though I am. I get treated a lot better than Black people would,” she said. “But I want to show all my Black family and Black friends that I am here for them.”

The Simi Valley police force was armed and present at different areas where the protesters were headed. Police blocked a few 118 Freeway exit ramps, including Tapo Canyon.

As the protesters reached the police station, an altercation occurred between a young protester and an older white man who criticized the protest.

Maxillian, 29, a protester from Lobo, Kentucky, stepped in to de-escalate the situation by telling the young protester, “It’s about love, chill out.” He then turned to the crowd and said, “If you guys react to this, [people against Black Lives Matter protests] win!”

Maxillian said he came to the protest to record it on his camera and participate in the peaceful demonstration but once he saw the disagreement, he felt he needed to step in.

“There was an altercation just because people had different views but at the same time at the end of the altercation, they were standing for the same thing. If anything put me in between that altercation, it was love,” he said.

As the crowd gathered around the Simi Valley Police Department, protesters used a megaphone to lead chants for George Floyd and Breanna Taylor. A protester, who identified himself as a small business owner of a veterinary clinic in Simi Valley, spoke to the crowd about using his white privilege to advocate for Black lives.

“My wife and myself are gonna put our money where our mouth is. Do not support a business that does not think Black lives matter,” he said, as the crowd erupted in applause.

The crowd then chanted, “People not profits.”

Another protester led the crowd in a moment of silence. The group kneeled for eight minutes, 46 seconds — in honor of Floyd.