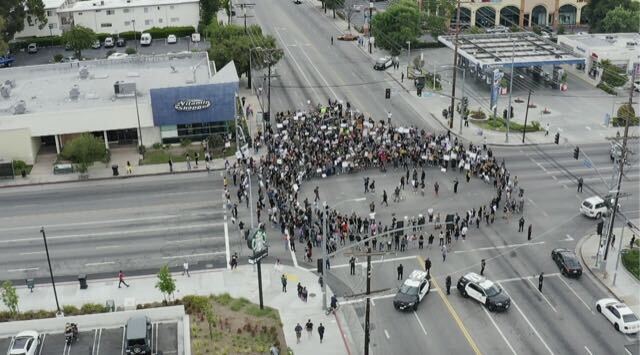 An overhead view of the Northridge Black Lives Matter protest at the intersection of Nordhoff Street and Tampa Avenue.

NORTHRIDGE — Northridge Black Lives Matter organized another protest, which was attended by more than 100 protesters, to march against police brutality and celebrate the life of Breonna Taylor. Protesters marched from the Northridge Recreation Center to the Chatsworth Courthouse, and back to the park.

Before marching to the Chatsworth Courthouse, the protesters sang “Happy Birthday” to commemorate what would have been Taylor’s 27th birthday. Louisville Metro police officers, who had a “no-knock” warrant,  shot and killed Taylor when they raided her home during a narcotics investigation in March. The officers have not been charged with any crimes.

As protesters left the park and traveled southbound on Reseda Boulevard, they chanted “No Justice, no peace.”

Abby Rivas, a protester, said she wanted to vocalize her emotions with fellow protesters.

“I’ve been so angry and frustrated at what’s going on in the world,” Rivas said. “I’ve been feeling so helpless, and I can’t do anything about it, but I know that my voice is one of my only assets so I just wanted to speak out against the injustices that have been happening.”

Rivas said she was overwhelmed with emotion to see people care about the same cause.

“When I got here I started to tear up,” Rivas said. “It’s been amazing seeing everyone come together – different ages, different ethnicities. It’s just so beautiful that we can be united and fight for each other.”

Protesters formed a circle at the intersection of Reseda Boulevard and Nordhoff Street, where they dedicated an eight minutes,  46 seconds moment of silence for George Floyd, who was killed in the custody of Minneapolis police. Some protesters kneeled while other protesters sat on the ground.

Brandon Seed, a protester, said he drew a connection between the video of George Floyd’s death and his personal life.

“It’s sad to see a video of a person who cries out ‘Mom, I can’t breathe.’ I personally saw my uncle die in my house and he said “I can’t breathe.” So when I heard that, it just hit,” Seed said.

The circle of protesters chanted Taylor and Floyd’s name in remembrance before making their way to the intersection of Reseda Boulevard and Tampa Avenue, where they formed another circle and chanted.

Eventually, the protesters reached the Chatsworth Courthouse, where they were met with police in riot gear guarding the courthouse’s entrance.

Robert Mah, a protester who marched while holding an upside down American flag with “Ignorant America” written on it, said he’s disappointed in the police brutality he’s witnessed and the way the police have been treating protesters.

“I don’t want to pay taxes for these policemen that are shooting rubber bullets at people,” Mah said. “I almost got shot at in the face. It’s ridiculous. I don’t understand it. I have relatives that are police, too, and I lost all respect for them – all of it – entirely.”

Rivas said the Los Angeles Police Department and police around the country need policy changes in regards to police brutality.

“I know people are saying that the protests don’t do anything, but the protests are exactly why all of the officers that are involved in George Floyd’s murder were convicted and the murder was changed from third-degree murder to second-degree murder,” Rivas said. “And that was a victory in itself, and I think all of this is just the beginning and we’re going to keep fighting until African Americans and people of color are treated equally in this country.”

Organizers paused to address the crowd, many of whom sat peacefully on the floor, at the courthouse. At 3 p.m., the group marched back to the park. The protest officially ended at 4:30 p.m.

Friday’s protest was the second demonstration organized by Northridge Black Lives Matter, which was founded by Black CSUN students who hope the group will become an official chapter of Black Lives Matter. The group announced the event via Instagram on Thursday.

Saeed Yusuf, one of the organizers for Northridge Black Lives Matter, said they wanted to form this group to give San Fernando Valley a voice through their activism.

“We made our page Monday and we were out marching on Tuesday,” Yusuf said. “We’re ready for our voices to be heard.”

Corrolee, another one of the organizers, said the motivation behind the protests was rage.

“I got some people and made a flyer and posted it, and then let God do his work,” Corrolee said. “And all of a sudden, we received so much support and it just went crazy. Now, we know we have support, we’re confident and we’re going to keep going.”

Yusuf reiterated a statement that has been chanted across the country.

“We want justice,” Yusuf said. “There will be no peace until we get justice.”