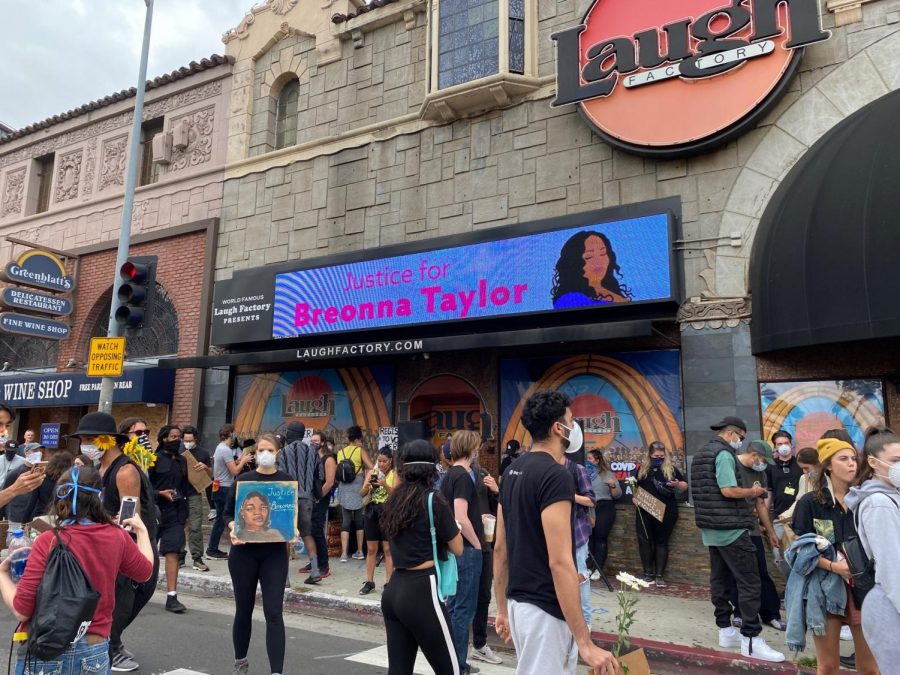 The event was organized by Sade Sellers, who announced it through Instagram on Thursday.

“Today Breonna Taylor would have been 27 years old,” Sellers said at the beginning of the event. “It’s her birthday, it is a day she should be spending with us but she is not. Breonna Taylor’s murderers have not been charged.”

Louisville police officers shot and killed Taylor in her home in the middle of the night during a botched narcotics investigation into two men who lived far away. As of Friday, the officers involved have not been charged.

Outside of the Laugh Factory, a DJ began playing music as people celebrating Taylor danced in the streets. The crowd sang “Happy Birthday” over a box of donuts adorned with lit candles.

A gate near the Laugh Factory served as a memorial, as people hung small bouquets of flowers and signs with neon pink duct tape. The memorial area was set up by two young girls, who also donated flowers.

“We wanted to make a memorial right here on this empty space,” said Emilia Fernandez, who was one of the organizers. “Hopefully nobody takes it down. We hope it lasts as long as possible. Even though she’s passed, her legacy is living within us and her death particularly is leading us right into the future.”

After an hour of marching in the streets of West Hollywood, participants met back at the Laugh Factory to give speeches about police brutality. The celebration concluded at 3 p.m.