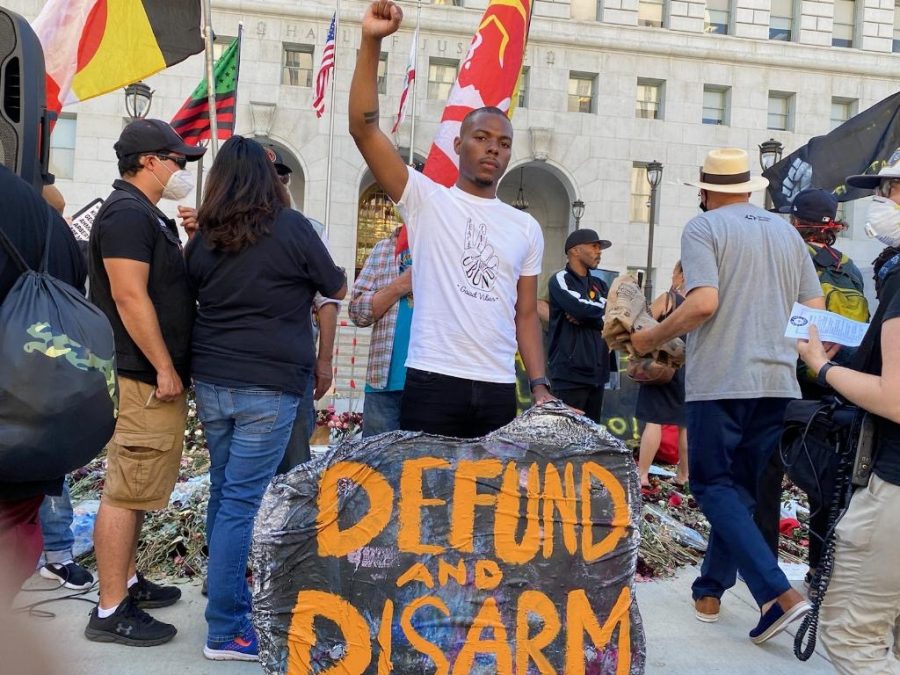 David Cunningham, member and organizer for Black Lives Matter Los Angeles, stands with his fist in the air with a sign that says "Defund and disarm."

DOWNTOWN LOS ANGELES — Black Lives Matter Los Angeles, along with hundreds of demonstrators, gathered outside of the Hall of Justice on Wednesday afternoon to protest for the defunding of the Los Angeles Police Department and District Attorney Jackie Lacey’s inaction to prosecute police officers for misconduct.

Police in riot gear surrounded and guarded the Hall of Justice, as the crowd chanted, “Jackie Lacey must go. Jackie Lacey will go. Killer cops ain’t funny. New DA for 2020.”

A section of the sidewalk in front of the Hall of Justice was covered in flowers and signs that were dedicated to victims of police-involved deaths. Family members of the victims lost to police brutality spoke to protesters, sharing their experiences of losing their loved ones.

Anya Slaughter, the mother of Kendrec McDade, lost her 19-year-old son in 2012 at the hands of Pasadena police. She shared her hardship with the crowd.

“It’s been eight years since my son was taken away from me by the police department – officers Jeffrey Newlen and Matthew Griffin,” Slaughter said. “Not a day goes by that I don’t think about my son. It’s hard for me at times, but I just stay uplifted by things like this.”

She said demanding justice for those lost to police brutality, like George Floyd and McDade, will make a change.

“Their lives will never be in vain if we continue to do things like this,” Slaughter said. “We have to make a change. We can’t accept nothing less. Jackie Lacey must go.”

Slaughter voted for Lacey during the 2012 election. But six months later, McDade was killed by police. Lacey promised to prosecute the officers after the Office of Independent Review Group released its report, according to Slaughter. After six months of silence from Lacey, Slaughter got word that Lacey wasn’t going to prosecute Newlen and Griffin.

“My son lost his life on the same street he was conceived on,” Slaughter said. “I am not going to let this pass. I’m going to fight for my son until I can’t breathe anymore.”

She called on everyone in attendance to continue the fight.

“We have to come out together all the time. We have to get her out of office. L.A. County vote Jackie Lacey out,” Slaughter said, to which the crowd responded by chanting, “Jackie Lacey must go.”

David Cunningham, a member and organizer for BLM-LA, said he wants to see Jackie Lacey out of office and school police and the Los Angeles County Sheriff’s Department be defunded.

He said BLM-LA has been organizing every single Wednesday for two and a half years fighting for change, and although the crowds are large now, the crowd size often doesn’t last.

“We’ve seen crowds go away in a couple of weeks, we have to organize to a point where crowds stay,” Cunningham said. “That’s the only way we’re going to continue to see change. These large crowds have made changes in defunding the LAPD a little bit, but that’s not enough. We need more.”

“We hope the LAPD is defunded and we create this new system that works for everyone, where people aren’t being killed unjustly at the hands of government officials who are sworn to protect and serve,” Cunningham said.

Reign Morton, another organizer with BLM-LA, said strategy and spirit are important in the fight for justice.

“I’m mentally strong, physically fit and spiritually sound, because this isn’t a physical war — this is a spiritual war,” Morton said.

He said the fight for the movement is for the next generation.

“They’re seeing this, y’all,” Morton said. “I don’t have kids, but I’m terrified to bring them into this world – terrified. Things aren’t going back to the way it was.”