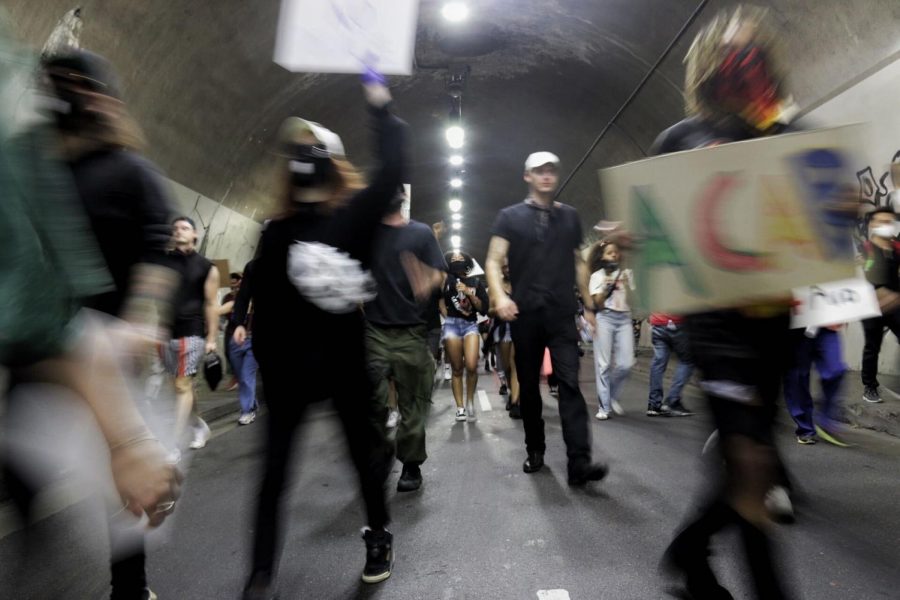 DOWNTOWN LOS ANGELES — A few thousand protesters gathered in front of Los Angeles City Hall in the early afternoon on Thursday. The protest remained peaceful as the police and National Guard presence was limited to protecting surrounding buildings, a continued shift in tone from the clashes that took place in downtown over the weekend.

Mayor Eric Garcetti lifted the curfew for the city of Los Angeles just before the protest began downtown.

Several protesters spoke to the crowd about the importance of voting and political involvement.

“I swear to God I will get into policy. I will end systemic racism. I represent all of you. I hope that all of you can go to school to get educated, and to get into politics to fix the fucked up system,” said Julianna Mack, a 19-year-old speaker.

Mack said officials at Mack’s grade school defended a boy who called Mack the n-word, on the claim that it was the boy’s right to free speech.

“We’re going to change this bullshit. I’m done. My dad, my grandmother and my grandfather had to protest this shit. I can’t believe we still have to protest,” Mack said. “It makes me so mad.”

At around 4:30 p.m., the crowd marched through the tunnel on Third Street toward Figueroa Street and the 110 Freeway. Police blocked the freeway entrances, but the demonstrators made no attempt to walk onto the freeway as other protesters had in days past.

The crowd snaked through the streets of downtown. The protesters returned to City Hall at 5:30 p.m.  Some demonstrators delivered speeches to the crowd. Bestia, a local Italian restaurant, handed out free pizzas to the crowd.

The group resumed its march at 7 p.m., making another round through the streets of downtown.

The protesters eventually made their way back to City Hall at 8 p.m., where they chanted “Jackie Lacey must go”, building on yesterday’s Black Lives Matter protest in downtown which specifically targeted Jackie Lacey, L.A. County’s district attorney. Activists have called on her to resign on the charge that she has tolerated police misconduct.

Most of the protesters left around 9:30 p.m., but some stuck around and socialized. One group of about 50 people gathered around a speaker and sang in unison to Bill Withers’ “Lean On Me.”