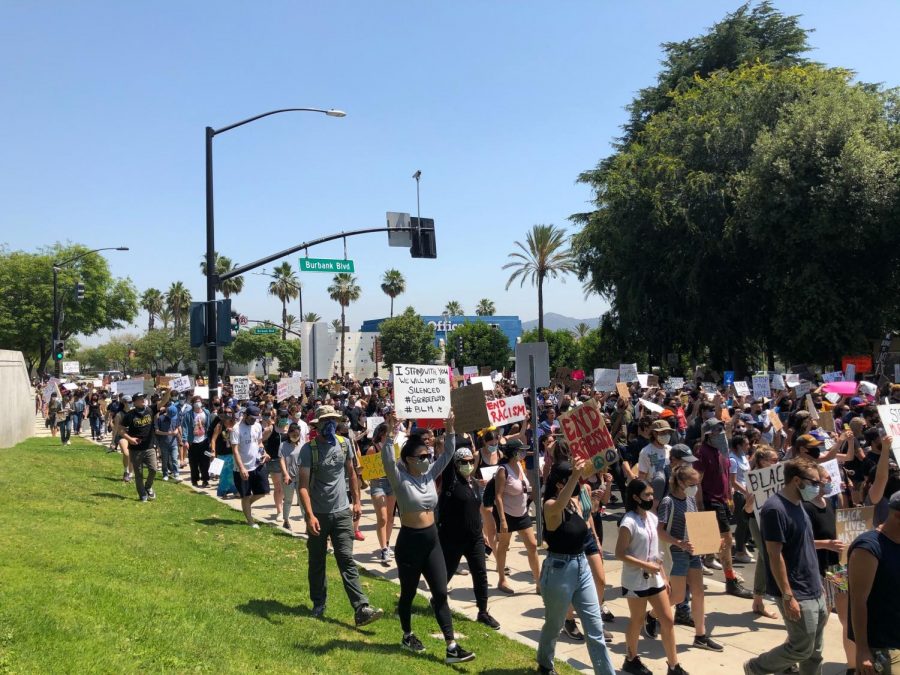 BURBANK — About 100 people convened at McCambridge Park, located on Glenoaks Boulevard in Burbank at 12 p.m. on Thursday as the eighth day of protests continued throughout Los Angeles. The group marched from the park to Burbank City Hall.

The protest was organized by Reed Shannon and Natalie Kinlow. Kinlow, 18, is an incoming CSUN freshman majoring in dance and minoring in biology.

“We’re here today to bring awareness to the death of George Floyd,” Kinlow said. “And even though his murderers were charged and arrested, we believe that sustainable change still needs to happen and in order for that change to come, we cannot be quiet, we cannot stop protesting.”

A diverse crowd made up of young people and families with children made up the protest group. Along the way its march to the City Hall, the group paused outside of the Burbank Police Department.

What started as an initial group of 100 participants grew in size as the protest made its way through downtown Burbank. At the end of the protest, Kinlow announced 1,420 people had participated.

“The fact that we did this today peacefully with no violence, no looting, no hate at all, just pure love, we’re fighting it in the best way possible,” said Jade Piteri, a 19-year-old protester.

The first peaceful protest in Burbank took place on Monday with some police presence.

The Burbank Police Department made 14 arrests Monday night after the city’s curfew. According to a press release, a majority of the arrests were based on the suspicion of looting.

Despite the high number of arrests after Monday’s protest, there was a moderate police presence during Thursday’s protest. Streets in downtown Burbank were blocked by police to ensure protesters’ safety and minimal traffic disruption.

The city of Burbank announced there would be no enforced curfew Thursday night, in accordance with L.A. County.

The group made their way back to McCambridge Park and the active protest ended at 3 p.m.

“They heard us today, they saw us today,” Kinlow said. “But tomorrow cannot be the same as yesterday.”