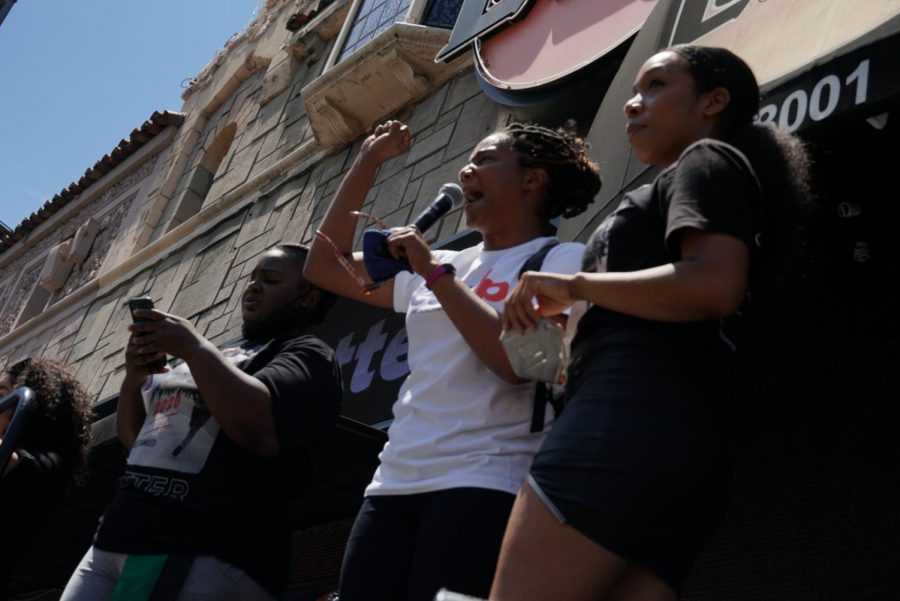 Comedian and actress Tiffany Haddish speaks to demonstrators at the Laugh Factory protest.

WEST HOLLYWOOD — Protesters gathered outside the Laugh Factory on Sunset Boulevard to raise awareness against police brutality and social injustice. What started as a small group of people grew to over 50 participants at the event’s peak.

“This is a serious situation going on in the world,” said Edwonda White, a stand up comedian. “It’s so great to see people of so many ethnicities that are supporting equality.”

The Laugh Factory is one of the biggest comedy clubs in Los Angeles, making it a center of joy and laughter for people of all genders and races. The location of the protest may have encouraged the spread of unity and joy instead of anger and hate among the protesters.

“We brought a bunch of comedians and stars here to demonstrate that we need justice for African-Americans in this country,” said Jaime Masada, the owner of the Laugh Factory. “Laughter is healing. We need to start healing people and bringing each other together.”

The demonstration itself began around 12 p.m. and continued for hours as people from many different groups gave powerful speeches about the importance of racial equality and explaining how the people can begin to make a change.

“Protest doesn’t mean looting and rioting, it means peace and inclusion,” said E.J. Joseph, one of the protest’s organizers. “This change isn’t only for Black people — it’s for the world.”

Joseph and Sade Sellers, a screenwriter, organized the protest in order to peacefully educate people about the injustice that has been around for decades and how it can be stopped with love and peace.

Comedian and actress Tiffany Haddish, as well as Hollywood celebrities such as Ciera Foster and Lil Rel Howery, gave a speech advocating for social change and justice for African-Americans all over the nation.

“I care about all people, especially people that look like me,” Haddish said. “It was really important for me to speak from my heart today to hopefully connect with the hearts of others and make some effective change.”

This protest is just one of the hundreds that have been going on around the country over the past few weeks in response to the death of George Floyd. Many protesters hope that these protests can lead toward systemic change.