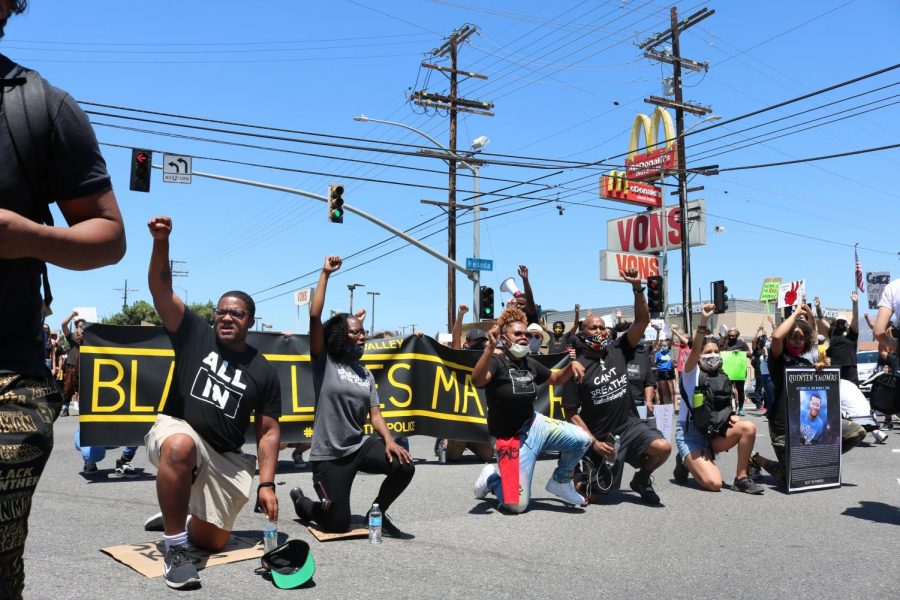 Organizers and protesters champion for change by kneeling in the intersection

NORTHRIDGE — Hundreds of protesters Saturday morning came together in Northridge to call for the defunding of the police and other measures as nation-wide demonstrations enter the third week.

“We wanted to show you all that we’re not just coming out and marching. We’re coming out with demands now, we’re coming out here to change,” said Carrole Logan, a member of Northridge BLM.

The protest began in the Sears Auto Center parking lot at the Northridge Fashion Center. Organizers started by performing a libation, where they said the names of Black lives who have been lost to police brutality and officer-involved shootings, before speakers delivered remarks.

“We can live in a world without police. We have communities right now across the world who do that everyday,” said Justin Marks, a member of BLM-L.A., Revolutionary Scholars and recent CSUN graduate. “We want to defund CSUN PD, we want to close the jail at CSUN, we want CSUN to end its contract with the California Prison Industry Authority and we want to make ethnic studies a requirement.”

Marks called for the defunding of CSUN’s police department and the closure of its on-campus jail. He also said CSUN has a contract with the CALPIA, a state institution that oversees prison labor and manufacturing, and called on the university to terminate it.

Ebony Martin, CSUN student and member of Northridge BLM, said defunding CSUN’s police department and police in general could mean more funding for education and more funding for people who specialize in work untrained police are asked to do.

“(The institutions) try to stereotype us all the time and assassinate our character once they assassinate us. That’s what they’re going to try to do to Quinten,” said White, who brought a sign with Thomas’ picture to the event.

“They’re gonna try to assassinate his character,” White said. “Little do you know, he was in his third year of college, trying to be a registered nurse, trying to help people. The nurses in the jail couldn’t even do their job and help him.”

Before they began to march, the crowd sang the Black national anthem and held a moment of silence for Robert Fuller, 24, who was found hanging from a tree in front of Palmdale City Hall on Wednesday.

The group, led by the speakers from the different organizations, marched east on Nordhoff Street from the Northridge Fashion Center toward the CSUN Department of Police Services building, located on the west side of the CSUN campus.

Protestors chanted the names of Fuller, Thomas and Breonna Taylor, who was killed by police in her home in Louisville, Kentucky last year.

Along the way, the group formed a circle and occupied the intersection of Nordhoff Street and Reseda Avenue, where organizers delivered more speeches and protesters continued to chant.

The demonstrators eventually made their way to the campus police department, where they gathered outside and reflected on the change needed at the university.

Marks, who majored in Africana studies at CSUN, spoke about the student activism on campus in the late ‘60s — activism that led to the creation of the university’s Educational Opportunities Program and ethnic studies departments that exist today.

“This is your history,” Marks told the crowd that consisted mostly of students. “Do you have anything to commemorate them? No … But I see a giant Matador, a symbol of colonialism on this campus.”

Marks, himself, has a long history of activism on campus. In 2010, a 22-year-old Marks was one of six CSUN students arrested during a protest against educational budget cuts. The charges were dropped two years later.

Ethnic studies was a main part of the conversation at Saturday’s demonstration. AB 1460 is a state bill that would make ethnic studies a graduation requirement in the California State University system. The state assembly is set to vote on the bill on Monday.

Tyrone Carter, the former Chair of the University Student Union’s Board of Directors and formerly incarcerated, spoke to the subject.

“I was blessed to be able to take advantage of education and academia, but that came with a challenge. As I walked through the rooms of CSUN and other schools, their academics were very Eurocentric,” Carter said. “That’s the same education I received growing up. They denied me (W. E. B.) Du Bois. They denied me James Baldwin. They denied me all the Black scholars who were out there.”

Miriam Neal, former CSUN student, called for the commitment of non-Black allies to the movement before the group marched toward Los Angeles Police Department’s Devonshire station.

“In your everyday lives you have to show up and you have to check your fucking heart …You have to be able to take the conversations and understand, ‘Hey, you might be a part of the problem.’ You might be. It’s just what it is,” Neal said.

The protesters then marched up Reseda Boulevard and assembled outside LAPD’s Devonshire station, where the demonstration ended.

Marks reminded everyone of BLM-L.A.’s demands, which include defunding the police, prosecuting killer cops and adopting the People’s Budget L.A.

He also reminded everyone of demands specific to the CSUN community: closing of CSUN’s jail, ending CSUN’s contract with the CALPIA, renaming the Delmar Oviatt Library — which Marks said is named after a racist — and getting justice for Thomas.