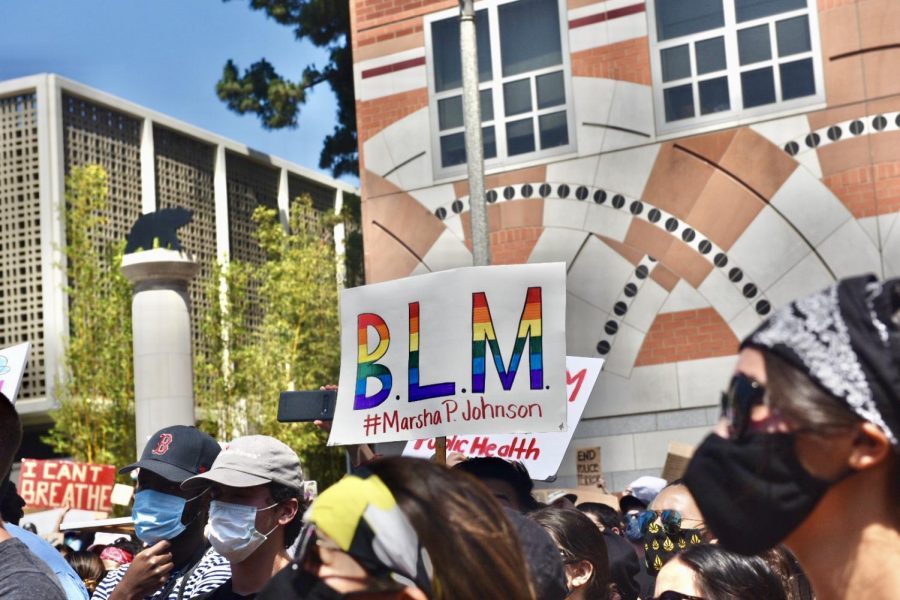 A demonstrator holds a sign that reads "BLM #MarshaPJohnson" during the June 4 protest on UCLA campus.

Pride Month began as a fight against police brutality directed toward the lesbian, gay, bisexual, transgender, queer, questioning, intersex and asexual community. The act of resistance is usually celebrated annually in June to commemorate the Stonewall Riots and to celebrate the LGBTQIA+ community.

Despite event cancellations due to the COVID-19 pandemic, nationwide protests against the killing of George Floyd due to police brutality, Pride Month will still be honored and celebrated.

The LGBTQIA+ movement in the United States started during the Stonewall Riots, one of the monumental events of LGBTQIA+ history, after police raided Stonewall Inn — a gay bar in New York’s Greenwich Village — and arrested bartenders and bar patrons, who resisted arrest. The riots continued for several days.

The movement was led by Marsha P. Johnson and her friend, Sylvia Rivera. Johnson, a Black trans woman, was a gay liberation activist and prominent figure during the Stonewall Uprising in New York City in 1969. Rivera, a Latina-American drag queen, was also an avid gay and trans rights activist who was known for throwing the second Molotov cocktail during the Stonewall Riots.

Johnson was killed on July 6, 1992. Her body was found in the Hudson River off the West Village Piers, according to Biography.com. The police ruled Johnson’s death as a suicide, despite claims from her friends and other members of the local communities that she was not suicidal.

Johnson’s work continues to be honored by the LGBTQIA+ community today. In 2015, The Marsha P. Johnson Institute was established to defend and protect the human rights of transgender and gender non conforming communities.

Pride Center collaborated with University Counseling Services to offer Let’s Talk at 2-3 p.m. on Mondays and Tuesdays via Zoom. The free and informal counseling sessions are provided on a first-come, first-served basis.

The center also hosts other virtual events and services, such as Virtual T-Time, GAYme Night, and their newest virtual event, OUT on Stage. The event, where students can celebrate Pride Month virtually, features live performances from LGBTQIA+ performers 7-9 p.m. every Friday in June on Instagram Live.

Pride parades are one of the ways for the LGBTQIA+ community to celebrate Pride Month. In Los Angeles, Pride Month is celebrated with the L.A. Pride parade, which usually takes place in West Hollywood. The event, however, will be replaced this year.

Black LGBTQIA Advisory Board Council, made up of Black LGBTQIA+ leaders, was formed to move forward in organizing the All Black Lives Matter solidarity march on Sunday.

The protest is in response to racial injustice, systemic racism and all forms of oppression, according to the press release. All Black Lives Matter aims to amplify Black Queer voices and support Black Lives Matter in its current demands: to prosecute killer cops, defund the police and reinvest in the community.

“The protest is in direct response to the state-sanctioned violence against Black people, and the murders of Tony McDade, George Floyd, Breonna Taylor, and Ahmaud Arbery,” the ABLM statement reads. “It is also about the 601 of our people killed by police in Los Angeles County in the last seven years and hundreds of others killed by white supremacy more broadly, including Sky Young, Gemmel Moore and Timothy Dean.”

According to the statement, the Advisory Board is not working with Christopher Street West Association, the nonprofit organization that produces L.A. Pride, on the pre-march rally program, but will serve as an independent body creating a program aimed at amplifying the voices of the Black community and allies.

L.A. Pride, which was canceled due to the COVID-19 pandemic, would take the form of a march against injustice, racism and all forms of oppression, according to the CSW communication team’s initial announcement on June 3. The organization received backlash from many on social media, as the event was planned without any input from Black organizers. The organization later deleted the statement.

CSW and L.A. Pride announced on June 8 they will no longer be involved in organizing Sunday’s event.

The All Black Lives Matter march will begin at 11 a.m. on Hollywood Boulevard and Highland Avenue on Sunday.