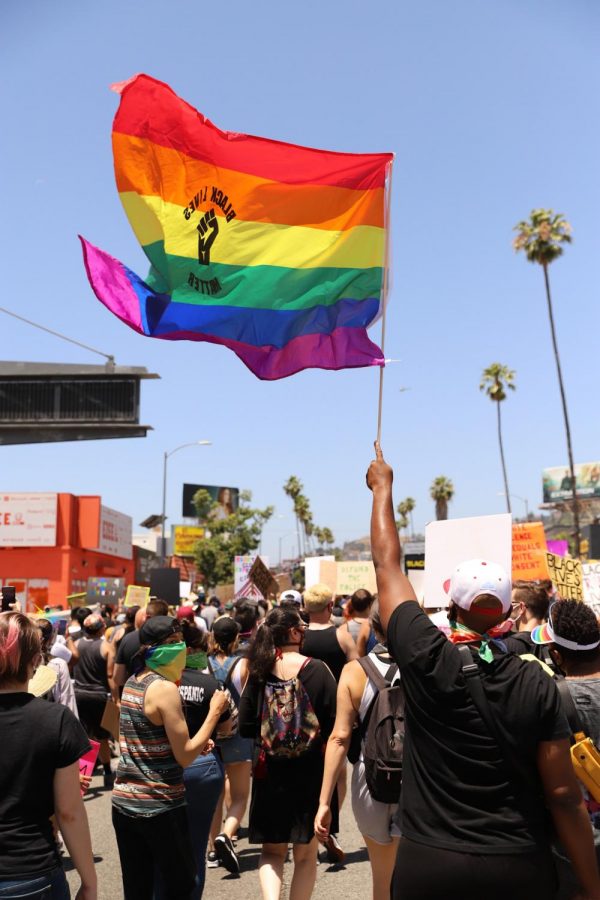 Hundreds of protesters march during the "All Black Lives Matter" solidarity march in Hollywood, California.

WEST HOLLYWOOD — Hollywood Boulevard was filled with rainbow flags and signs on Sunday for an All Black Lives Matter march, which was organized by a group of Black LGBTQ leaders from different organizations.

The group, also known as the Black LGBTQIA Advisory Board Council, organized the event in direct response to the death of Tony McDade, a Black trans man who was killed by police. The event also protests against systemic racism, racial injustice and other forms of oppression, according to B.L.A.C’s statement.

The march began at 11 a.m. on Hollywood Boulevard and Highland Avenue and ended at the intersection of San Vicente and Santa Monica boulevards in West Hollywood.

Paul Scott, an organizer and founder of the organization L.A. Black LGBT Movement, explained the importance of fighting for Black LGBTQ lives, as well as others.

“The challenge for us as gay, same-gender-loving queer people within the Black race is that we often are marginalized,” Scott said. “We’re often sort of an afterthought, if we’re a thought at all. We want to make sure that we are within that umbrella of the Black family and that our lives matter as well.”

He went on to outline how far this generation has come, but the progress they have made doesn’t seem far enough.

“I grew up in a very segregated in America. Michael Jackson was one of the first Black artists we had. So before that, it was all white and now there’s progress being made,” Scott added. “I still think white people are scared of us. They’re just scared of me and there’s nothing I can do about that — it’s demonstrated every day. They just shoot us. That’s fear, but I think that’s embedded in the culture.”

As the protesters began marching, LGBTQ activists such as Blossom Brown gave examples of trans people who have died and yet to receive justice. Brown mentioned Dominique Rem’mie Fells, a Black trans woman whose remains were found on Monday in the Schuylkill River near Bartram’s Garden in Philadelphia.

“Black trans people are being left out of the Black movement and I have some shit to say about it,” Brown said. “Dominique Fells was mutilated. They fucking mutilated a sister like she was nothing. I have every right to be angry.”

Following the words from Brown and other activists, protesters chanted, “This is what democracy looks like,” as they marched west toward Santa Monica Boulevard.

Charles Britton-Eisman, a local protester, explained why allyship is important in the Black Lives Matter movement.

“Trans Black people and queer Black people are put in a very unfortunate intersection where they not only have to face the injustices (faced) by the Black community that we are protesting (against) now, but they are also faced with injustices for being a queer,” Britton-Eisman said.”It is important that we, as a community, acknowledge that those struggles are real and that we hear them and that we want to support them in fixing those as well.”

As the protest came to a close around 3 p.m., Yuriel Young, a trans community activist, performed Beyoncé’s song, “Formation,” before the crowd dispersed.