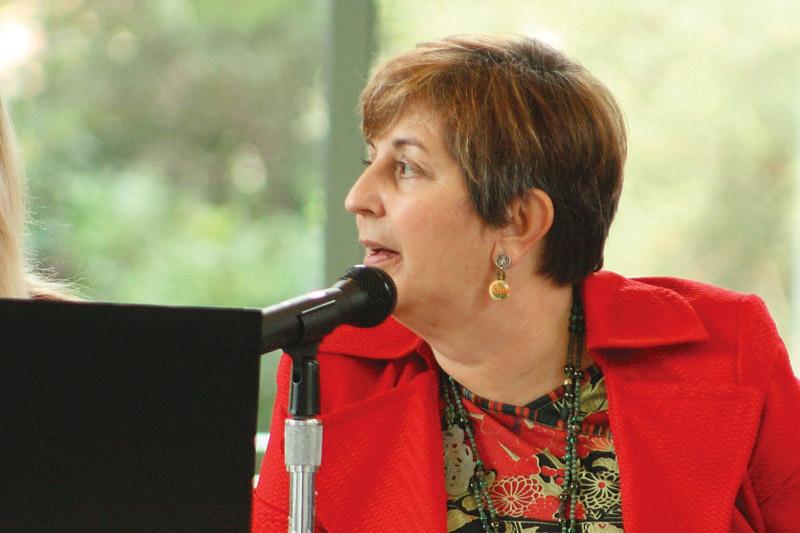 Associate Dean of the Library Administration, Marianne Afifi, made a special presentation during the Associated Students (A.S.) meeting on Tuesday. According to Afifi, textbooks will be available for reserve in the Oviatt Library in the near future. Photo Credit: Katie Chavarin / Staff Photographer

With Monday’s protest against statewide budget cuts to higher education, the Associated Students (A.S.) university advisor questioned the role and presence of A.S. in the budget cut conversation.

“Are they feeling body is not powerful enough. . . caring?” said Tom Piernik, university advisor and director of student development and international programs.

“Why are they not asking questions to you?” Piernik said to the A.S. board, which was received with silence.
“Many people (are) scratching (their) heads (and asking) ‘Where do we voice our opinion?’”

The statewide budget cuts have resulted in cuts to the number of classes, student admittance and implemented mandatory furloughs to faculty and staff. Budget cuts are expected to continue next school year.

“I applaud students for protesting,” said Upper Division Senator II Joshua Taylor. “We as a unity (A.S.), we try to reach out to our constituents, but with the size, it’s hard to reach out to all.”

“That is something we should know, they are our students,” Tonantzin Oble, senator from Socail and Behavioral Sciences I, said after the meeting about the budget cut protest.

“We’re very supportive of students that want to stand up for their rights,” said Pacheco after the meeting.
Pacheco didn’t know about the protest until the weekend, he said.

The open forum section of the A.S. meeting, Pacheco said, is a place for students to make announcements about protests and can voice their opposition to budget cuts.

Though A.S. wasn’t involved in Monday’s protest, Pacheco said he was doing what he could for students. In yesterday’s meeting, Pacheco authored a legislative referral that aims at revising the policy that dictates the timeframe to add and drop classes.

“I’m working on my end to get policy recommended that is conscientious of students,” Pacheco said.
Senate approves nominee, total vacancy down to eight Shreeniva Ghorpade, graduate student majoring in engineering management, was approved to the Graduate Senator II position, bringing the senate vacancies to eight.

As a member with EESA in India, Ghorpade said he took a leading role in arranging conferences, persuading employers to speak at events at the engineering college and organizing blood donation camps for the community.

A representative from the Filipino American Student Association said they tried to contact senators and the finance director to get on the agenda for Tuesday’s meeting, but couldn’t citing the unavailability of senators and the director.

John Fuller, business law major, said during the senate meeting that he had been trying to find Shawn Hakim, the A.S. finance director, for the past two days.

Pacheco said to Fuller, “As president, if one of our directors are not helpful . . . always feel free to contact me.”