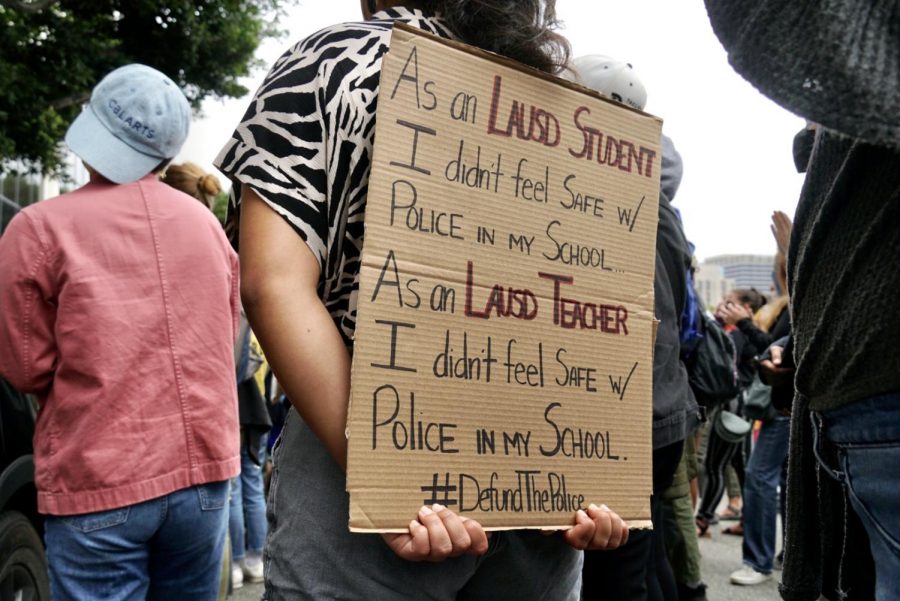 A protester holds a sign during a "defund LAUSD police" protest in downtown Los Angeles.

The march was in collaboration with Black Lives Matter Los Angeles and L.A. Students Deserve, a youth-led organization of students, teachers and parents who seek justice in the education system.

Joseph Williams, a Black Lives Matter-L.A. organizer, said they are calling for the defunding of LAUSD police department and reinvesting of funds to help Black students and, ultimately, all students.

“Folks have been uprising all over the country after the murder of George Floyd, Ahmaud Arbery, Breonna Taylor and Tony McDade and other folks. Today we’re here to make that call as well for our schools,” Williams said. “Today we’re going to show the city and the school board that there is a growing movement and a student-led movement to defund the school police and to reimagine public safety in LAUSD schools.”

Williams said that the system of policing, which is connected to the system of colonization and enslavement, continues to brutalize Indigenous and Black people.

“We know that criminalization starts happening when we are children and when we have police in schools, things that are child behavior or adolescent behavior are often criminalized,” Williams said. “When we say defund the police, we know that’s a step towards creating a new system of public safety for the community that doesn’t rely on punishment in cages and on criminalization.”

A speaker, who introduced herself as Sarah, said Black children are more likely to be a victim of police brutality.

“To know that my little brother can be targeted is painful,” Sarah said. “Black students represent 8% of the district, yet made up a quarter of arrests in schools. To know that Black bodies are not only disregarded in this world, but in a place that is supposed to represent the freedom of expression and education of all people is painful.”

Last year, the LAUSD Board of Education voted to eliminate the use of random wanding or searches using metal detectors. LAUSD Superintendent Austin Beutner said on Monday he is planning on recommending to the district’s school board that campus police can no longer use pepper spray.

“Although that is a victory, that (use of pepper spray) is no longer a primary focus,” Sarah said. “We are not here to reform Los Angeles School Police Department, because no matter how many tactics and body cams and cultural training they had, they will not change history.”

Mya Edwards Pena, a speaker at the march, shared personal poetry and said this problem is toxic from the roots and that LAUSD chooses to invest $70 million in an outdated system that criminalizes black and brown youth.

“I never talked or spoke to a policeman a day in my life, but I have friends who have been questioned, searched, arrested, tested, even pepper-sprayed, one, two, three, four times,” Pena said. “We are not here to remove, reform or reimagine police. We are here to defund and put those dollars towards students like you and me.”

“Imagine caring for Black and brown youth like the tree with the long roots — like us, dare I say — love us, nourish us, with psychiatric social workers, school psychologists, nurses and college aid who want to see us improve,” Pena said. “Divest that money in the school police and see how soon we’ll flourish and bloom because once we keep mental health resources in our schools, Black and brown students will blossom like the tree you planted.”

The crowd dispersed around 1 p.m.