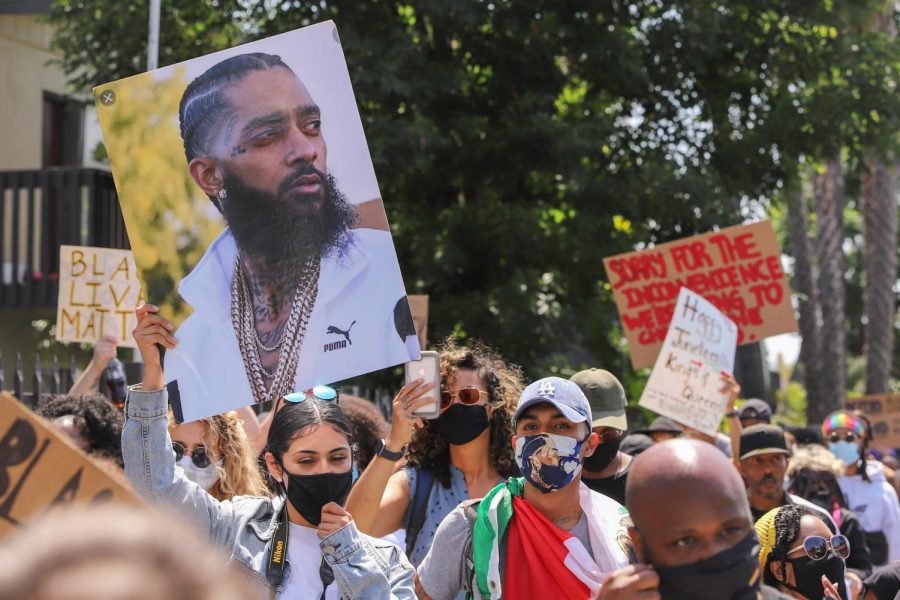 An individual holds a picture of late rapper and local hero Nipsey Hussle, who was actively involved in uplifting his community.

SOUTH LOS ANGELES — Hundreds marched in Los Angeles on Friday to celebrate Juneteenth in an event organized by Black Lives Matter Los Angeles. The day commemorates the emancipation of slaves.

The march began at a Ralphs parking lot near the intersection of Obama Boulevard and South La Brea Avenue, where organizers and speakers delivered remarks from the back of a truck fitted with audio equipment. A banner that read “Black Lives Liberating Black Community” and a Juneteenth flag hung on the truck’s side.

“Juneteenth, so that we’re clear, is not about some official papers from the United States. Juneteenth is about remembering our rebellion,” said Tabatha L. Jones Jolivet, a professor at Azusa Pacific University.

“When we lift up these things, we celebrate Juneteenth not just as a moment, but as the contemporary movement of Black freedom struggle,” Jones Jolivet said.

The crowd, led by the truck, marched south down Martin Luther King Jr. Boulevard to the Baldwin Hills Crenshaw Plaza where Grechario Mack, a Black man, was killed by police two years ago.

Kendrick Sampson, actor and founder of activist group BLD PWR, led a number chants, including “Defund the police” and “Whose streets? Our streets,” from the truck as it cruised down the road.

The group reached the mall parking lot where several of Mack’s family members addressed the crowd following chants of “Say his name. Grechario Mack” and a performance of Sam Cooke’s song, “A Change Is Gonna Come.”

“He was here at the mall, paranoid, having a mental breakdown. He brandished a knife, but he never wielded it at anyone,” said Quintus Moore, Mack’s father.

“They bounded up the steps with every gun blazing for a Black father who was having a mental health challenge,” said Melina Abdullah, co-founder of Black Lives Matter-L.A.

She made the case for defunding the police and investing in alternative public safety.

“We could have had a mental health worker come in and say ‘Are you alright, brother? What do you need, brother?’,” Abdullah said.

Holding the event at the mall was also significant for another reason. A Crenshaw community group is taking action to purchase the mall and fend off big developers.

“On this day that we celebrate our Juneteenth, what better place to do it than at our mall,”  said Damien Goodman, founder and executive director of Crenshaw Subway Coalition, a local anti-gentrification group.

Earlier this week, a developer backed out of its plan to purchase the mall after facing backlash from the Crenshaw community.

“Today we have this beast known as gentrification that seeks to push us out,” Goodman said. “This is my home. My family has been here for over 100 years. You’re going to have to take me out toes up.”