Editorial: The importance of defunding the police 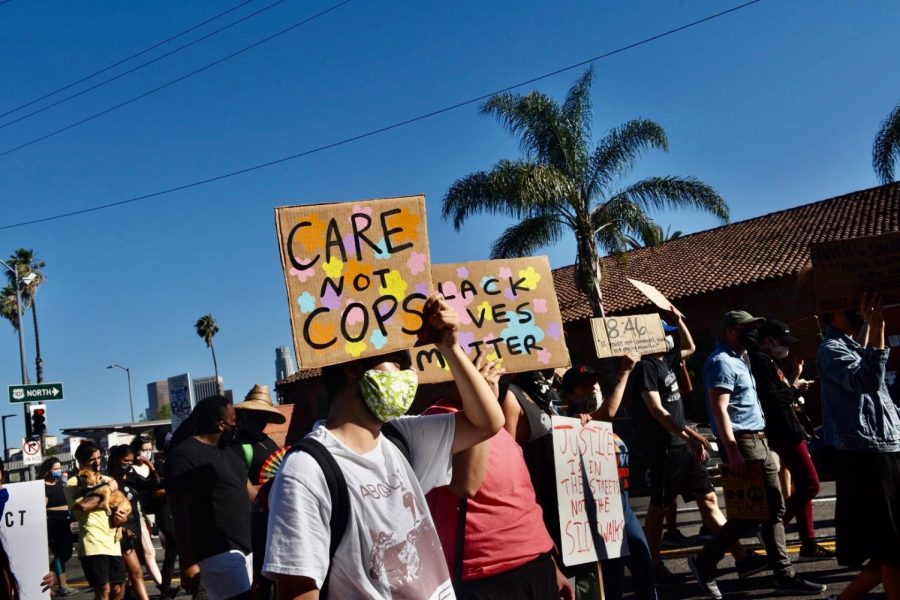 For five consecutive weeks, people across America, and around the globe, have protested the death of George Floyd, Breonna Taylor and other Black people killed by police brutality and systemic racism. Everyday, people are fighting to end the long endured violence imposed on Black and brown communities. Protesters are challenging the status quo by using their voices to help the world reimagine a society that is safer for themselves and their families. Their tireless activism to achieve lasting change is at the heart of the fight.

One demand at the forefront of the Black Lives Matter movement is the defunding of the police.

Black Lives Matter Los Angeles advocates for a city budget that would decrease the LAPD’s portion of funds from 54% — approximately $1.8 billion — to less than 2%. Black Lives Matter L.A.’s proposed budget, called the “People’s Budget,” would allocate more than 70% of the total budget to basic needs, such as housing and health care, and police-less community safety.

The act to defund the police is a necessary step toward a just and equal society. Alternatives to traditional policing can improve community safety without resorting to violence.

While police officers in the U.S. are sworn to protect and serve, their policing model contradicts this notion; The model does not prioritize de-escalation, thus putting citizens — which also includes suspects that officers try to subdue — in harm’s way.
Nearly half of police recruits undergo stress-oriented training based on a military model that involves intense physical and psychological pressure, according to a 2013 report from the U.S. Department of Justice. This results in a mentality driven by stress which hurts communities instead of helping them and in the long run, the police officers as well.

Communities are better served by social work professionals in guardian roles. At its core, social work values the dignity and circumstance of every individual. This mentality should be central in reimagining community safety.

While some say these models are too difficult to implement, cities such as Eugene, Oregon already dispatch unarmed social workers to calls. White Bird Clinic started Crisis Assistance Helping Out On The Streets, also known as CAHOOTS, in 1989.

A two-person team of healthcare professionals – consisting of a medic and crisis worker – respond to non-criminal calls, including requests to handle mental health crises, that often end in tragic interactions with police. Community-oriented programs, like CAHOOTS, are better equipped to handle non-emergency cases better than police officers. CAHOOTS’s strategy has also been used as a model for other organizations in Denver, Portland, Oakland and Olympia.

In order to bring change into fruition, community engagement is needed, whether it be through activism in the streets, educating others on social media, promoting awareness on issues among your family members or calling your representative.

Pressure from protesters pushed Mayor Eric Garcetti to propose $150 million in cuts to the LAPD and prompted a few L.A. City councilmembers to introduce a motion that would dispatch unarmed social workers instead of police to non-violent calls.

We urge our readers to challenge the status quo. The defund movement is an opportunity for our generation to fundamentally transform public safety and uplift some of the most marginalized communities.