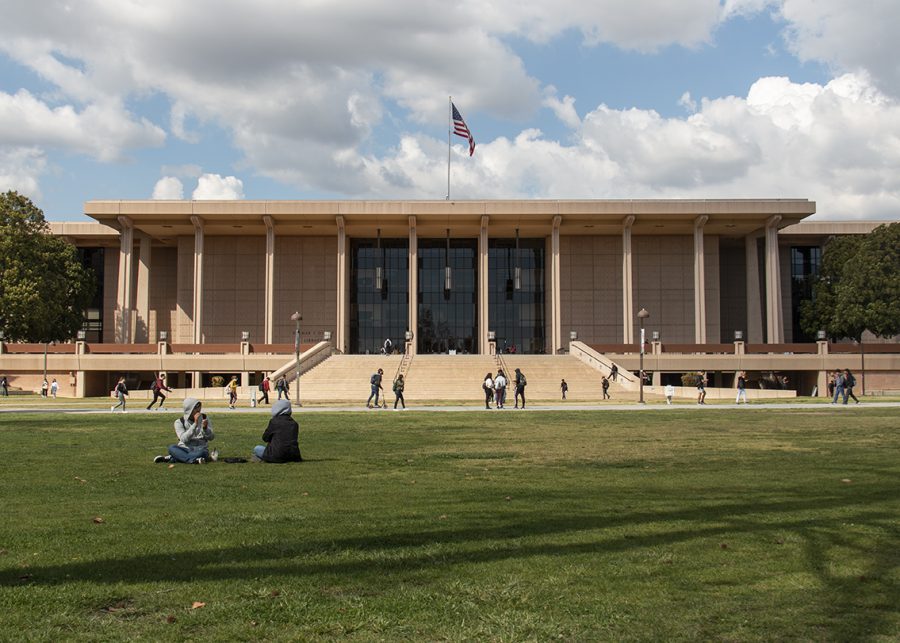 The Delmar T. Oviatt library received its name in 1973 in honor of CSUN's administrator Delmar T. Oviatt who served as Interim president in 1969. Oviatt died of a heart attack on December 24, 1971.

A CSUN working group hosted a meeting Wednesday, allowing the campus community to weigh-in on whether the university should change the name of CSUN’s Delmar T. Oviatt Library, after students accused former CSUN Interim President Delmar T. Oviatt, of being racist and an oppressive figure.

Members of the working group include the president of the Alumni Association, the Associated Students President and Vice President, two members of the SCC and other faculty members. The group also includes Xóchitl Flores-Marcial, an assistant professor from the Chicana/o studies department, and Ellen Jarosz, head of Special Collections and Archives, who have helped to explore records and other archival materials that will assist in the evaluation of Oviatt’s actions as a leader.

The group is investigating the history behind the library’s name and reviewing whether Oviatt’s actions as a leader contradict the current values of the university, according to Watkins. The group began its work in September 2019 after the CSUN Students of Color Coalition, which advocates for diversity on campus, published a letter containing six demands for the university, including the demand to rename the library in May 2019.

The Students of Color Coalition claims that Oviatt was unsupportive of ethnic studies departments during his tenure as interim president in the late 1960s and tried to silence minority student protesters who pushed for more diversity on campus.

The activist group often cites how Oviatt’s declaration of a state of emergency on campus allowed police to put down demonstrations led by Black students and students of color in 1969 to support their claims of Oviatt’s racism. Oviatt’s declaration resulted in the arrest of 275 demonstrators and injury to one protester’s eye, according to The Sundial’s reporting from the time.

“Oviatt silenced the students of color, refused to meet with them and the communities involved who wanted to create a more inclusive campus,” the SCC wrote in an Instagram post, encouraging students to participate in Wednesday’s meeting.

Wednesday’s meeting came against the backdrop of a nation reckoning with its racist history and the symbols that uphold it. The conversation at the meeting was fitting for the time as demonstrators nationwide topple statues of racist historical figures and big brands — like Aunt Jemima — step away from long-used racist logos, but Watkins made clear that the timing was a coincidence.

“It would be easy for some to misconstrue that this in response to the broader societal reactions in this space, but it really is not. Not at all,” Watkins said.

Watkins said the meeting was originally scheduled to take place on campus in March, but had to be postponed in the wake of the pandemic.

Many who called in during the meeting said they had only learned about the history of activism on campus and Oviatt’s actions through their ethnic studies courses and were dissatisfied that the history wasn’t as recognized throughout the rest of campus.

Miguel Duran, CSUN graduate and director of the documentary “Unrest: Founding of the Cal State Northridge Chicana/o Studies Department” shared his experience doing research to produce his film, emphasizing that there was no textbook that documented the history of the Chicana/o studies department.

Duran said he interviewed Miguel Verdugo, head of the former United Mexican-American Students organization, who revealed Oviatt was unsupportive of extending admissions to people of color back in the ‘60s.

Verdugo’s interview stuck with him the most throughout the production of his project, Duran said, as Verdugo expressed his disbelief that a library, a place that grants access to learning, would be named after someone who did not want black and brown students to learn.

“I’m coming at you as a former student and community member. It’s just a lot of information that we did not know, a lot of our community members did not know and a lot of professors don’t know,” Duran said. “I think it’s important that we name our library after individuals who have made a positive impact not only for Black and Brown students, but for the campus and for the community as well.”

While the majority of the commenters at Wednesday’s meeting supported changing the library’s name and agreed with the characterization of Oviatt as a racist figure and symbol, a few disagreed.

Jennifer Keysor, a CSUN business lecturer, was upset with what she felt were undue accusations of racism against Oviatt.

“It was a different time; we weren’t there.” Keysor said. “Perhaps you could say Abraham Lincoln was a racist by today’s standards, but without him we wouldn’t have today’s standards. So I would like you to look at this man for who he is in the context.”

Watkins said the group will assess the evidence before concluding whether the name should be changed and providing a recommendation to Harrison. Watkins was unable to give a timeframe for what is left in the process.

*Editor’s note: This story was updated at 6:05 p.m. to include clearer language.