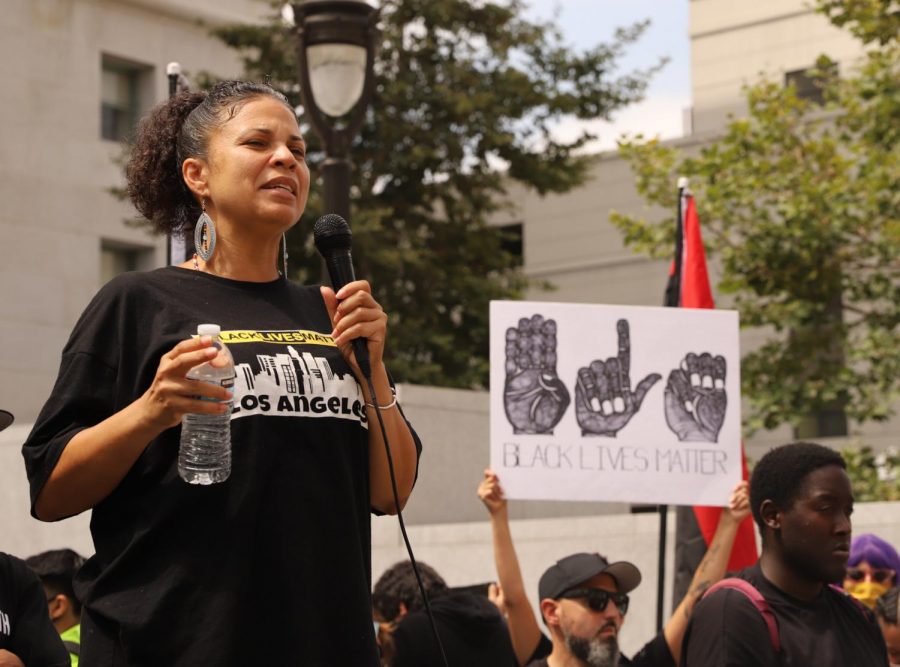 Melina Abdullah is a co-founder of Black Lives Matters Los Angeles and a professor of Pan-African studies at Cal State Los Angeles. She answered a few questions on topics such as student activism, the role of media coverage, defunding the police and more.

What does it mean to defund the police?

Defunding the police is about recognizing that we overspend on policing in this country and especially in Los Angeles — that 54% of our city’s general fund has been proposed to go to Los Angeles Police Department and budgeting is a zero-sum game. So if you’re giving 54% of your general fund to police, you’re not investing sufficiently in the things that actually make communities safe.

Has defunding the police always been front and center for BLM or was there more of a focus on police reforms in the beginning?

I think BLM always recognized that you could not reform your way out of a system that was built to produce the outcomes that it has. I don’t think that we always focused on the budget which is what we’re focusing on now, so the police defunding focuses on the budget. But I think we’ve always known — we’ve never been, you know, kind of misled in such a way that believes that modest reforms are going to get us free.

There’s a motion from L.A. Councilmember Herb Wesson that would dispatch social workers instead of police to certain calls. How promising is this latest motion?

I think the latest motion does a lot to pull back police from doing jobs that they have no business or training or expertise to do and if it’s implemented correctly, it could really substantially defund the police. If police are not being deployed for mental health calls or housing or all of these other calls that don’t require police as we traditionally know them to be — I think there’s a statistic like over 90% of calls are nonviolent calls — so if you talk about police only being deployed in incidents of violence, I think you’re moving very quickly up the road to abolition.

There’s a plan in the works to defund something like 90% of the LAUSD police. What kind of work needs to happen at the university level to defund police at individual campuses or across the CSU system? Here at Northridge, we have Northridge BLM, which is advocating for defunding our campus police.

Exactly what you’re doing. So students need to be at the center; faculty need to have your backs. We need to enlist the support of the Union CFA (California Faculty Association) and the staff unions. I think that if there’s any place that police shouldn’t be, it’s on campuses. That means K-12 campuses as well as university campuses. They have no business being there. I can’t think of one incident where school police and university police, in particular, have helped the situation. Right? They’ve maybe responded after the fact or been used to suppress the will of students, but I don’t know when school police have actually prevented any crime from happening or intervened in a way that’s helpful. So I hope the students, faculty and staff will continue to advocate and say remove police from campus.

What is the role that student activism plays in the BLM movement?

Well, student activism is hugely important to the movement. We know that the best ideas are the ideas from our young people. Young people are less invested in the current system. Young people tend to be more audacious and visionary in what it is they’re calling for. The initial convening of Black Lives Matter — when we were first called together by Patrisse Cullors — about half of the people gathered were my students from Cal State L.A. So again, I think students are essential to the movement.

The California State Senate just passed AB 1460. As someone who is working as a professor in the CSU system, what else needs to be done in regards to equality on campuses?

AB 1460 is a huge step forward and it took us years to get that passed. Right? It’ll make ethnic studies a requirement in the CSU. We need to stay vigilant around how it’s implemented because what we see is mainstream departments pretending like they have expertise in ethnic studies and we know that they don’t. So it’s really important that it’s implemented on campuses and again, we still have to wait for the governor’s signature, but I don’t think that’ll be a problem. I think it will pass. We need to make sure that it’s not watered down in the implementation phase.

So Black Lives Matter doesn’t endorse political candidates. Some believe in voting; others don’t. We do have, with Movement for Black Lives, an electoral justice program, which is really grounded in the fact that we should all have the right to vote and Black voter rights need to be protected. So it’s not saying how to vote or even that you should vote. But if you want to vote, that voting right should be protected. I personally believe in voting and I think that for Californians, it’s much more important to vote for down-ballot items. California is going to vote for Joe Biden regardless, so that’s done. But I think that it’s important that, for instance, we know that the district attorney of L.A. County (Jackie Lacey) has the blood of 609 people on her hands and that we try to stop her from getting re-elected.

What are some of the big policy issues BLM is focusing on?

I think a lot of it ties back into police defunding, right? A lot of it ties back into where we put our resources. So as we talk about defunding the police, we also have to couple that with reimagining public safety. So what does a safe community look like? Well, if you drive through downtown Los Angeles, I can tell you what it doesn’t look like. It doesn’t look like tents and tents and tents for blocks and blocks and blocks, right? It doesn’t look like Skid Row, being one of the largest Black communities in Los Angeles. So it’s important that as we think about the chant and the call to defund the police that we think about what it means, what will be ushered in when police are in fact defunded.

What are some of the biggest forces working against you and the movement today?

So there’s a lot going on. There’s a lot of ally work that needs to happen. We need to make sure that we pull in every segment into doing this work and I think that we saw that (on Tuesday) when we were outside of LAUSD’s School Board demanding an end to school police. So when we talk about police abolition, if there’s — again, if there’s any one place police don’t belong it’s on campuses. And so, we had young people from the K-12 system really leading that fight, but what was really encouraging is that as we fight for Black lives to matter that we understand that non-Black folks are beginning to step in and recognize that they have a role in that struggle. So we’re in constant partnership with the American Indian movement, with Centro CSO, with a bunch of other organizations like White People for Black Lives, all coming together to make these demands. I think that those demands become more and more likely to to come to pass.

What are some things that activists as organizers should worry about on the individual level?

So I think you can’t expect to be trying to topple a system and think that the system doesn’t have consequences for you, right? So if you’re going to go up against the state, if you’re going to go up against a murderous police department, you have to recognize that they’re going to come for you and you have to figure out what price you’re willing to pay. So, what is your line? And then you know, think about your line and being willing to go a little past it. You’re not going to get to be the “favorite negro” anymore if you’re constantly calling out white supremacy, but I think that’s an important choice that needs to be made. You may not get that job. You may not get invited to that party. You know, you’re probably going to get arrested at some point. But you know, if you don’t sacrifice something then your struggle wasn’t really a struggle.

We’ve seen a lot of diversity in the protests. How important is it to have a coalition along the lines of race, gender identity and sexual orientation among others?

I think it’s hugely important to have solidarity. I think that true solidarity always begins by accepting the leadership of those who are most impacted. So Black Lives Matter should never be led by a non-Black person, right? What we’re doing is challenging non-Black folks, especially white folks, to follow the leads of Black people. And so, solidarity means being willing to do that.

How does BLM feel about media coverage and where might you stand on the debate about whether photojournalists should conceal the identities of people at demonstrations?

Media coverage is hugely important. With media coverage, you’re bringing more people into the movement. I always welcome media coverage because it amplifies your messaging. I understand what people are saying about privacy, but folks are at a protest. How private are they really intending to be? What you don’t want to do, if you’re being responsible media, is just tell the story that’s pre-packaged by the district attorney’s office, by the police or by other powers that be and so it’s really important that journalists engage in a way that is worthy of that title of journalist.

What’s your message to the next generation of activists?

I think it’s really important that you understand your own power — that you don’t have to accept the world that you live in, that all of your most radical imaginings, all of your innate senses of fairness and right and wrong can come to pass if you’re willing to fight for those things. I’m hugely encouraged by, especially the Gen Z-ers, who really don’t take no stuff, who have been willing to step wholeheartedly and fully into the movement. I think it’s going to be the young ones who would really short order going to take the lead.