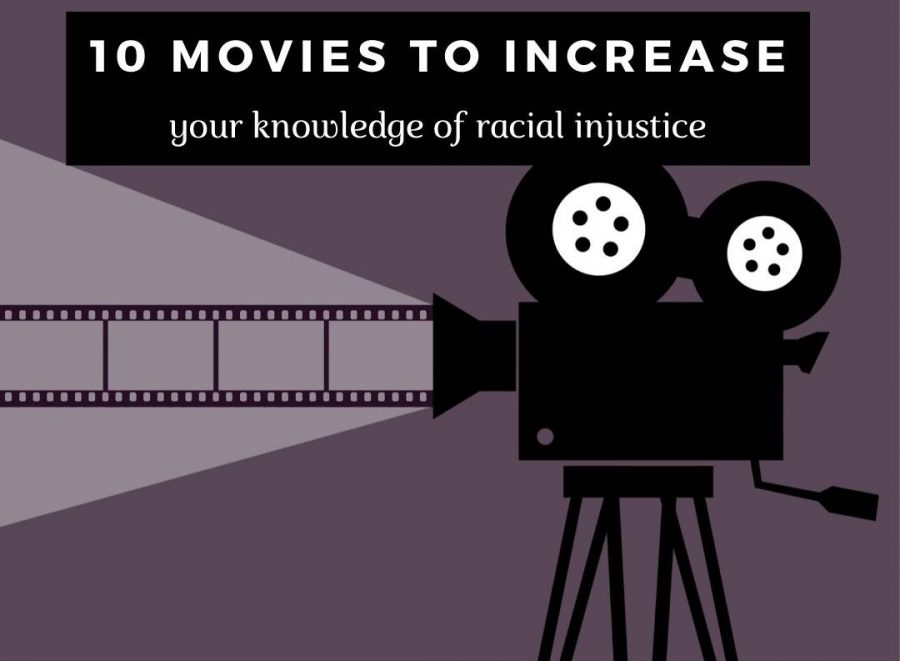 (Image courtesy of mohamed_hassan from Pixabay)

Racial awareness has always been important. With the death of George Floyd and others at the hands of injustice, it’s important to educate ourselves on the systemic racism this country has built itself on. Here are 10 movies and docu-series to watch that may increase your knowledge of racial injustice:

This Ava DuVernay project is a must-watch. “13th” is named after the 13th Amendment which abolished slavery in 1865. The Academy Award-nominated and Emmy-winning documentary shows history from slavery through to the mass incarceration of Black people in the United States. The documentary implies that slavery itself was never abolished due to the climate of the prison system. The documentary explains why people have been calling for reform against police brutality for decades. “13th” is eye-opening and should be shown in schools.

Another informative project by DuVernay is “When They See Us.” It is a four-part mini-series that chronicles the heartbreaking true story of five Black teenagers that were labeled the Central Park Five. They were convicted of a rape they did not commit. The teenagers were sentenced to maximum terms for juveniles; one of them was tried as an adult because he was 16. “When They See Us” received 11 nominations at the 2019 Emmy Awards. Jharrel Jerome won the Emmy for Lead Actor in a Limited Series or Movie for his role as Korey Wise —  one of the best performances of the decade.

“When They See Us” can be watched on Netflix.

“Fruitvale Station” was Ryan Coogler’s directorial debut. Michael B. Jordan plays Oscar Grant, a young Black man who was killed in 2009 by Bay Area Rapid Transit police officer Johannes Mehserle at the Fruitvale district station of the BART system in Oakland. The movie centers around his final day alive.

“Fruitvale Station” was one of the best movies in 2013 and won the Grand Jury Prize at the 2013 Sundance Film Festival. It has a 94% on Rotten Tomatoes. “Fruitvale Station” is a painful movie and is very raw, as it shows how police brutality can and often does lead to the death of Black people.

“Fruitvale Station” can be rented or bought on Amazon.

This six-episode documentary series is about the 2012 shooting of Trayvon Martin by George Zimmerman and follows the rise of Black Lives Matter movement, while exploring the racial tension in the United States. “Rest in Power” has a 100% on Rotten Tomatoes. Rapper Jay-Z, who produced the series, chose to adapt the series from the book “Suspicion Nation: The Inside Story of the Trayvon Martin Injustice and Why We Continue to Repeat It” by Lisa Bloom.

During the production of this project, Zimmerman was charged with stalking a private investigator who had been working with the producers of the series. Zimmerman contacted him with 21 phone calls, 38 text messages and 7 voicemails in two and a half hours, according to the investigator.

#Breaking: George Zimmerman pleads no contest to stalking charge. Zimmerman not present for hearing. As part of deal, Zimmerman will be placed on 12 month probation. No contact with victim. #WFTV pic.twitter.com/BZRGSNG3o6

The series can be watched on Amazon Prime for free or on Paramount’s website.

The first project that Jay-Z produced was “Time: The Kalief Browder Story.” It is a six-part docuseries story of Kalief Browder, a Bronx high school student who was imprisoned for three years without being convicted of a crime. Two of the years were spent in solitary confinement on Rikers Island. Browder was accused of stealing a backpack when he was 16 years old, and his family was unable to afford his bail, which was set at $3,000.

Browder killed himself at his mother’s home as a result of the physical and mental abuse that he had sustained in prison. The docuseries shows how the justice system is broken and shines a light on the injustices done to Browder, as well as millions of other men and women.

“Time: The Kalief Browder Story” can be watched on Netflix.

“I Am Not Your Negro” is based on James Baldwin’s unfinished manuscript, “Remember This House.” It is directed by Raoul Peck and narrated by Samuel L. Jackson. The Academy Award-nominated documentary explores the history of racism through civil rights leaders like Malcolm X, Martin Luther King and Medgar Evers.

“I Am Not Your Negro” is an emotionally powerful documentary that needs to be seen.

It is available for streaming on Amazon Prime.

Based on the 2017 young adult novel of the same name by Angie Thomas, the movie follows Starr Carter (Amandla Stenberg) who tries to stand up for what is right after witnessing her best friend being shot by the police.

“The Hate U Give” is very timely as the Black kid that was shot in the movie was unarmed and was reaching for his hairbrush. It is an honest and heartbreaking look into what Black Americans go through and the backlash they endure as they speak up.

It can be rented or bought on Amazon or YouTube.

Director Spike Lee’s epic biographical drama starring Denzel Washington as Malcolm X is nothing short of a masterpiece. The movie explores and shows Malcolm X’s career, incarceration, conversion and eventual assassination in 1965. It is a time capsule of how racism was back when Malcolm was alive and how it continues to survive in 2020.

Washington was robbed of an Academy Award but was nominated, nonetheless. In 2010, “Malcolm X” was selected for preservation in the United States National Film Registry by the Library of Congress as being “culturally, historically or aesthetically significant,” according to the Hollywood Reporter.

Based on the novel of the same name by Hillary Jordan, “Mudbound” was directed by Dee Rees and stars Jason Mitchell as a Black soldier and Garrett Hedlund as a white soldier as they return home to Mississippi after World War II. Stateside racism and white supremacists challenge their lives when they return home.

The themes of race and class are very prevalent and still haunt today’s society. “Mudbound” was nominated for four Academy Awards and Mary J. Blige, who played Mitchell’s mother, became the first person ever nominated for an acting and song award during the same year.

“Mudbound” is available on Netflix.

Daveed Diggs writes, produces and stars in the movie as Collin Hoskins, a convicted felon, who is struggling to finish the last three days of his probation. Hoskins witnessed a white police officer kill a Black man and is haunted by the incident. Hoskins’ white hot-headed best friend Miles Turner (Rafael Casal) starts to cause friction between the two of them as well.

“Blindspotting” was under-watched the year it came out but was one of the best movies that year, it has a 94% on Rotten Tomatoes. The movie deals with race, class, police brutality and gentrification.

“Blindspotting” is can be seen on Hulu with Cinemax subscription or can be rented on Amazon.

On June 11, Netflix dropped a 27-minute comedy “special” of Dave Chappelle purging his feelings and thoughts on the death of George Floyd and everything that happened after to a socially-distanced crowd in Ohio. Chappelle is raw and honest as he can be. Netflix released it on their YouTube channel and the title is how long former officer Derek Chauvin kneeled on Floyd’s neck.

It is a must-watch and can be seen on YouTube.