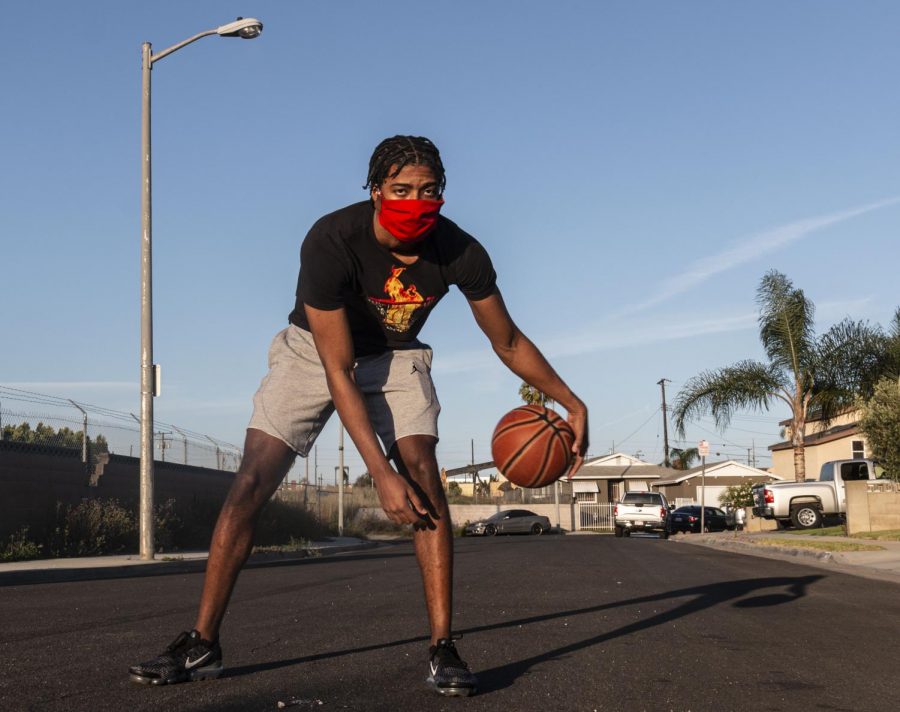 Amound Anderson is one of the many athletes set to play for CSUN this fall.

Elias Jauregui thought the game against College of the Desert was just like any other regular-season baseball game. The right-handed pitcher struggled with his command in the first inning, but his focus was unshakeable. After slowing himself down, Jauregui began dominating on the mound. He left the game after five shutout innings, in which he only allowed three hits and struck out 12 batters on his way to his sixth win of the season.

That game on March 11 would be his last in a Chaffey College uniform.

On the bus ride back home, Jauregui found out the NBA postponed the remainder of its season after Utah Jazz center Rudy Gobert tested positive for COVID-19. He kept an eye on the outbreak as it ravaged countries like China and Italy, but never thought it would have the same impact in the United States.

“That’s when I started putting it together that our season could possibly be over,” Jauregui said. “If an association like the NBA was already being suspended, then JUCO baseball was inevitably going to be suspended as well.”

Two days later, Jauregui was cleaning out his locker. His season, as well as his junior college career, was over.

Jauregui is one of many incoming CSUN athletes whose recruitment has been impacted by the COVID-19 pandemic.

As the nation’s leader in strikeouts at the JUCO level, Jauregui had no shortage of options for where he could continue his career at the next level. He fielded offers from UC Irvine, Hawaii and UC Riverside before he ultimately committed to CSUN on April 29.

Talia Taufaasau, a basketball player from Ventura College, didn’t have those options when her season ended. Going into the California Community College Athletic Association state tournament, she had interest from two schools but had yet to receive an offer. This tournament was the chance for her and several other JUCO basketball players to showcase themselves and get noticed by colleges.

Taufaasau was eating breakfast with her team at a local diner on March 12 just hours before their first-round game against Diablo Valley College. One of the assistant coaches was religiously checking Twitter for updates on the status of the tournament, but Taufaasau was dead set on competing even after learning the men’s tournament had been canceled. They were already there so they might as well just play, she thought.

The CCCAA then announced the women’s tournament would be canceled as well. Taufaasau and some of her teammates immediately broke down in tears.

“We worked this hard to get here,” Taufaasau said. “Not only were we not able to play for us as a team, but for the people who are trying to play at the next level, that’s a missed opportunity.”

Taufaasau’s recruiting didn’t pick up until a month after her season was cut short and it took another month to get an offer from CSUN. Almost all of her other offers were from out-of-state colleges. The only other California school that shown interest in Taufaasau was Humboldt State, a Division II school located 10 hours away from her home in Santa Clarita.

She was unable to visit campuses due to the pandemic. So when CSUN — a school that she grew up 20 minutes away from and visited before in high school — made an offer, she accepted it; familiarity was the biggest factor for her.

Campus visits normally play a huge role in the recruitment of a student-athlete. It gives coaches a chance to showcase their program and woo recruits, and helps the recruit decide if they feel a campus is the right fit for them or not. A wrench was thrown into this vital part of the recruiting process when the COVID-19 pandemic forced colleges around the nation to shutter their campuses.

“Not only can we not be around our own team, but we can’t evaluate nor have student-athletes and their families on our campus, or come to our games on unofficial visits to watch our program play and be around our players before a game,” said Dave Serrano, CSUN head baseball coach. “It has been something that none of us have ever experienced before.”

Serrano added that recruiting comes down to a lot of guesswork. Part of his evaluation process is seeing how recruits handle themselves in a face-to-face conversation. Serrano looks for how they look him in the eye, how they respond to his questions and what kind of questions they ask him.

He noted that at the same time, the recruits are evaluating him as well. Without that face-to-face meeting, it has made “the guesswork even more of a guesswork,” according to Serrano.

Despite the limitations and unprecedented challenges to recruiting this year, neither Serrano nor interim women’s basketball coach Lindsay Foster believe their programs have been put at a disadvantage.

“COVID-19 has impacted all sports, across all divisions,” Foster said via email. “This pandemic is an unprecedented situation that coaches across the country, and world for that matter, are navigating as best as possible.”

Student-athletes have also had to get creative with their recruiting process.

Fidelis Okereke, the CIF City Section Co-Player of the Year in boys’ basketball, had planned to take his visits after his final season with King/Drew Magnet High School ended. When that was no longer possible, he began FaceTiming with coaches, taking virtual tours of campuses and reaching out to current players on social media for their opinions on the school.

“I know it’s going to be a bit biased,” Okereke said. “But it’ll be helpful. I do want to see their take on how the campus is.”

Amound Anderson also pushed his visits back so he could focus on his academics and his final basketball season at Leuzinger High School in Lawndale. Anderson drew heavy interest from colleges in his first two years of high school, but it all faded away when he sprained his ankle during his junior season. He got his only offer from CSUN toward the end of his senior season.

Since he couldn’t visit campus, Anderson spent most of his recruiting process communicating with then-CSUN assistant coach Mo Williams after they met at the NCAA Basketball Academy camp in Arizona. Anderson picked the brain of the 14-year NBA veteran and eventually felt comfortable enough to commit to CSUN on April 24.

The pandemic has only motivated athletes who had their seasons cut short. They have spent as much time as they can trying to prepare for the next level of competition while in quarantine.

Taufaasau drives around her city most days looking for outdoor basketball courts that haven’t been boarded up.

“It definitely is a different type of hunger,” she said. “I don’t really know how to explain it.”

Jauregui throws with his teammates as often as he can. He’ll occasionally do live at-bats and throws a bullpen session every Sunday in addition to running and lifting.