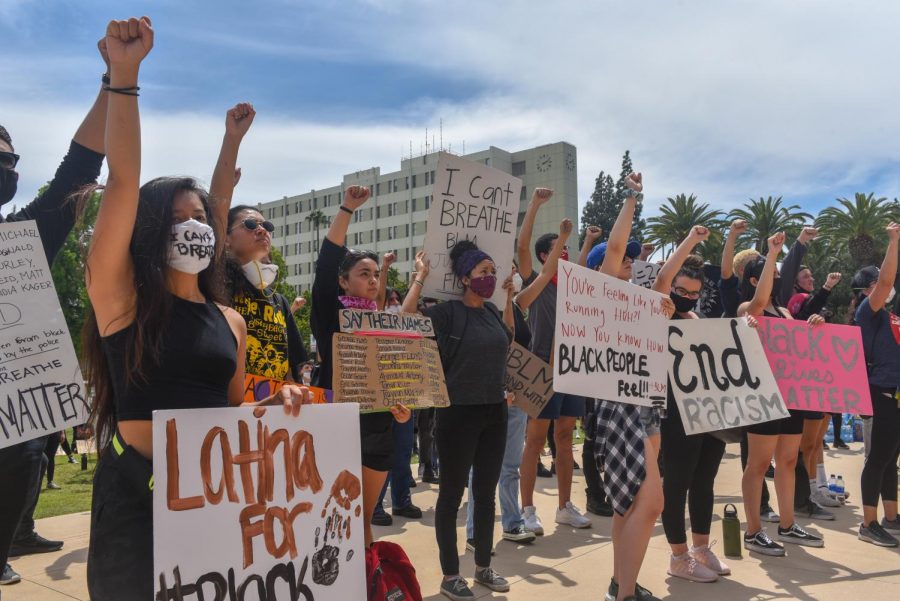 Protesters gathered outside of the Oviatt Library on Tuesday.

NORTHRIDGE — A group of CSUN students organized a peaceful protest that took place on the CSUN campus Tuesday.

The protest began at noon on the Oviatt Lawn and ended at around 3:30 p.m. with a moment of silence for George Floyd, Breonna Taylor and other victims of police brutality.

Individuals, weary of the mismatched information and relative newness of the account, raised their concerns on one of the account’s posts.

Instagram user “sheerfadel” commented: “A lot of people are not going to this anymore because we see that this page was just recently made yesterday. And we don’t know what and who you’re associated with.”

The @northridgeblm account expressed safety concerns around revealing the identity of its members in a post. On the morning of the protest, the account revealed that it was run by Black CSUN students who intend to establish an official Northridge chapter of Black Lives Matter in the future.

The account continued to emphasize that there would be no looting or vandalism taking place on the CSUN campus or the Northridge community while protesting peacefully.

“We’re here today to show that justice at the system that was created for us, is constantly targeting us as a threat. We’re not thugs and we’re showing here today that we’re peaceful as a CSUN community, as a Black community, brown community, Asian and white community,” said Ebony Martin, one of the CSUN students who organized the protest. “We’re all coming together to show that Black lives matter.”

The crowd was small at the beginning of the protest, but it grew as the crowd started marching off of campus and onto Nordhoff Street toward Reseda Boulevard. The group paused on Etiwanda Avenue to take a knee and held a moment of silence for George Floyd. Many motorists drove by, honked and raised their fists out of their windows in solidarity.

“We have to let them know we’re here to speak our concerns, but we’re also here to be peaceful today,” Martin said. “No looting.”

“Today we decided to organize peacefully because we want to keep walking in solidarity for the Black lives that have been continuously taken by officers and law enforcements, people of power are constantly taking people lives and they are not being held accountable and they need to be held accountable, they need to be in jail for murder, period.” said Coco McMillian, another CSUN student who organized the protest. “Black Lives Matter and they will continue to matter. If they keep getting hurt, we are going to keep doing this. I’m going to keep doing this.”

The organizers, as well as many who attended the protest, brought water to give to protesters. As the temperature was in the high 90s, the group paused between each street so the crowd could keep up.

“I’m very proud of the demonstration that I saw today, I think that the group represented themselves very well,” CSUN Chief of Police Gregory Murphy said. “I think it sent a resounding message that was inhibited by any distractions and all I can say is that I’m proud of the effort and support the cause.”

President Dianne F. Harrison addressed the peaceful protest in an email sent to the student body.

“In the midst of tremendous pain being experienced by so many, we all have a role to play in combating systemic racism,” Harrison wrote. “Earlier today, a peaceful protest took place on campus and the surrounding neighborhood, showing the determination of the Northridge community to participate in change.”

After the protest, the organizer took to social media to acknowledge the success of the protest and the community’s support.

“The support means so much. Our main goal is to become an official Black Lives Matter chapter in Northridge that upholds and demonstrates the same values and mission of @blklivesmatter. We want to show the world that Northridge cares about Black lives,” the post read.