Demonstration, which started at LAPD headquarters before protesters marched the streets of DTLA, ended peacefully 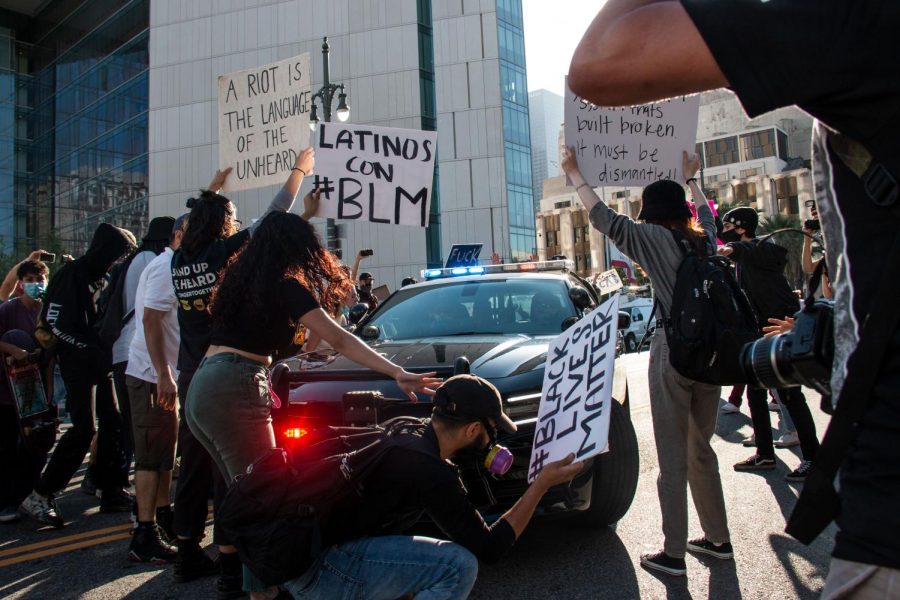 Protesters block a CHP vehicle as it drives past the LAPD headquarters on Thursday.

A portion of the protesters swarmed and stood in front of a California Highway Patrol vehicle, as a line of CHP vehicles drove by the headquarters. At least one water bottle was thrown at the cruiser, but the officer was able to drive away without any physical damage to the vehicle. No protesters appeared to be injured.

The same cannot be said for the day before, when Black Lives Matter protesters stopped traffic on both sides of the U.S. Route 101 near Union Station. Protesters held onto a CHP vehicle as it drove through the crowd. Protesters smashed the rear windshield, which caused the officer to speed off while protesters were on the vehicle. A protester fell off the vehicle and sustained injuries.

The initial group of approximately 100 protesters grew through Thursday evening as they began walking on the streets of downtown L.A. The protesters were eventually met by a line of LAPD officers at the intersection of Third Street and Grand Avenue.

The demonstration ended peacefully, after an approximately hour-long standoff. LAPD informed the crowd through a loudspeaker that the protest was deemed an unlawful gathering. Not only did they threaten to use less-lethal force, the LAPD also threatened to arrest protesters.

In Minneapolis, protests have continued and looting has occurred. A police station was set on fire by rioters on Thursday.

The Governor of Minnesota, Tim Walz, declared a state of emergency in Minneapolis and activated the National Guard to respond to the protests in St. Paul and surrounding communities.

“Peaceful demonstrations are a keystone of our democratic system. We must also allow those who wish to protest peacefully to do so safely,” Walz wrote in a statement. “Unfortunately, some individuals have engaged in unlawful and dangerous activity, including arson, rioting, looting, and damaging public and private property.”

The L. A. chapter of Black Lives Matter has planned another protest at Pan Pacific Park this Saturday.