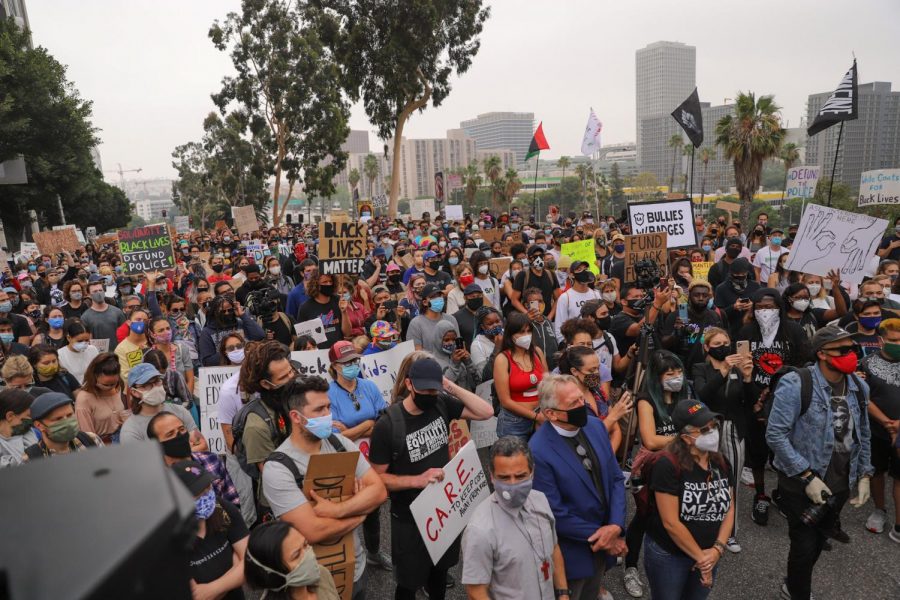 A crowd of protesters listening to Melina Abdullah, co-founder of Black Lives Matter L.A., as she performs a libation for the lives lost to police brutality in front of the LAUSD headquarters in downtown Los Angeles on Tuesday, June 23, 2020.

The protest took place as the LAUSD board meeting was in session. The board is set to reevaluate police presence in schools.

The protesters supported LAUSD board member Monica Garcia’s resolution, which calls for the reduction of school police funding.

The gradual reduction allows district officials to develop alternative safety and security plans. Garcia’s proposal is 1 of 3 motions up for discussion at the LAUSD board meeting today.

After the libation, she shared the reason why BLM-L.A., as well as her own personal reason, came out to protest on Tuesday.

“We are here to back you up, we are here to say we don’t need no more police in schools, we’re here to say that schools should be places where you are nurtured, not policed,” Abdullah said. “I’m here as an organizer with BLM and I’m also here as the momma of three children in LAUSD.”

Abdullah said her son, 10, was first visited by the police in school when he was in the first grade.

Abdullah pointed to the LAUSD building and said LAUSD need to do better.

“When we talk about defunding the school police, this is not a fucking theory. I’m sorry for cussing in front of the kids. This isn’t just about what we believe, this is about the lives of our very own children who are criminalized and traumatized constantly and then asked why they’re not doing good in their calculus test?” Abdullah said. “If you have school police who have AR-15 rifles in their fucking trucks, how do you think my children are suppose to learn?”

The crowd also chanted “Students not suspects” in between speeches.

Maya Henry, a Westchester Enriched Sciences Magnets alumna and incoming UCLA student, shared her experience being a Black student while school police were present on her campus.

“They say if you look into the eyes of a person, you can see their truth, as if all they believe in or every experience reveals themselves to you. Maybe that’s why the officers on our campus wear these shades because if they had the chance to look into their eyes, I’d probably be scared away. Maybe they wear these shades to mask who they really are, because they know if we could look them in the eyes, they wouldn’t be as tough as they try to be,” Henry said. “Dear LAUSD, the more you wait, the more students you fail, the more pain you create. Give us a chance to be great.”

Henry said the LAUSD doesn’t have to get rid of school police — they can reform, reinvent and reimagine it.

Joseph Williams, a BLM-L.A. organizer, said the organization has been having these conversations before the George Floyd protests. He shared stories from friends who have sons that have been criminalized and accused of sexual assault at 6 years old.

“We have students crying, talking about how they were trying to break up a fight and being attacked by school police. Stop criminalizing our kids, stop criminalizing our students and look at us as children that we are,” Williams said. “Unfortunately as we know it, Black pain is not enough. We’ve been telling people long before George Floyd, we’ve been talking about that for a long time, but they haven’t listened to us until now.”