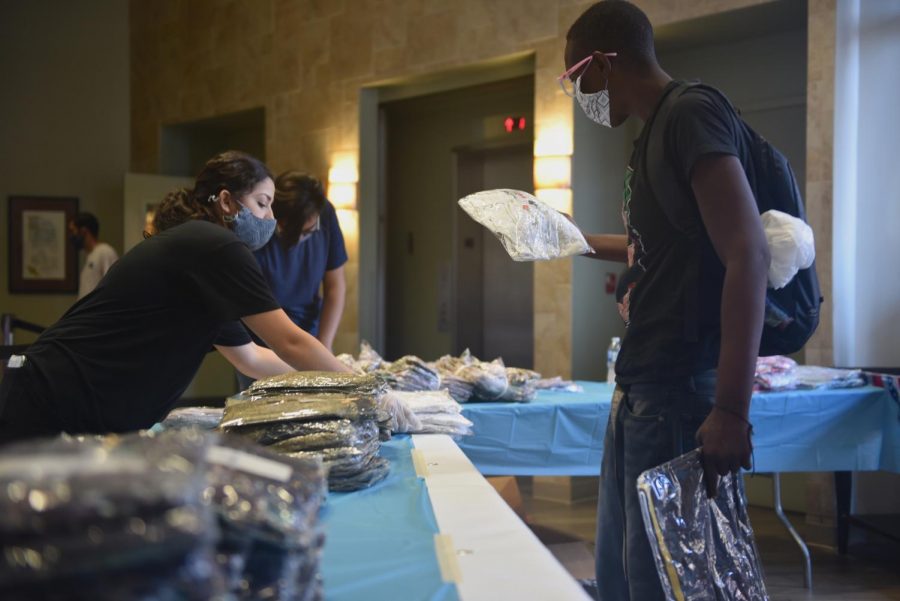 Samantha Machado, a volunteer and CSUN student, helps organize the outfits on the table.

Associated Students President Rose Merida and James Mizuki, a CSUN alumnus and founder of The Giving App, provided nearly 100 women with outfits from iToo Fashion during a clothing drive at the Los Angeles Mission’s Anne Douglas Center for Women on Saturday. This is the first event organized by The Giving App.

The event, which was coordinated by Merida, had nine volunteers, a majority of whom are CSUN students and alumni. Merida said the amount of volunteers had to be minimal due to social distancing.

L.A. Mission provided attendees with a cloth face mask if they were not wearing one. To prevent a crowd from gathering inside the building, Merida held the door and let one attendee in at a time. Attendees were able to pick between shorts or a pair of pants and choose two of the five different kinds of shirts from iToo Fashion. One volunteer was stationed at each table, showing the attendee the different clothes’ style and size options.

Felipe Arias, a co-founder of iToo Fashion, provided the outfits for the event. He contacted Mizuki and said he had boxes of clothes he would want to give away.

Mizuki said he created The Giving App to help people who wanted to volunteer but don’t know where to start.

“So for the app it started off with just a conversation with a coworker of mine. We were basically talking about our weekends and how we spend money on unnecessary things, so I was just thinking, ‘Wouldn’t it be nice to know that donating was going towards something genuinely good?’” Mizuki said. “Then it kicked off this concept of, ‘What if a million people thought the same way?’ and then it just snowballed — “What if we could change the world?””

“Even more people give a little bit of kindness, a little bit of anything and start this moving of kindness and create a real impact in people’s lives,” Mizuki said. “Same things for those who want to volunteer. They want to give back, but a lot of times we don’t even know where to look or where to start, so once they download The Giving App, they can find opportunities all over the area.”

“We’ve helped over 60 women so far, so it’s really nice to know that we helped them out,” said Justin Punzalan, a CSUN computer science major who volunteered at the event. “It’s nice to see CSUN students here, especially to see students I haven’t seen before, it definitely revives that just being with them again.”

Jose Mendoza, a CSUN alumnus who majored in broadcast journalism, reached out to Merida and volunteered for Saturday’s event.

“It’s important to help the community because in life, in order to move forward and everyone to be better, we have to work together and in unity and we need to move forward,” Mendoza said. “As CSUN students who care about the community not just their own community but the bigger picture, I think it’s amazing that we’re doing this and I think it’s awesome that James was the one who made the first step and created this app to help people.”