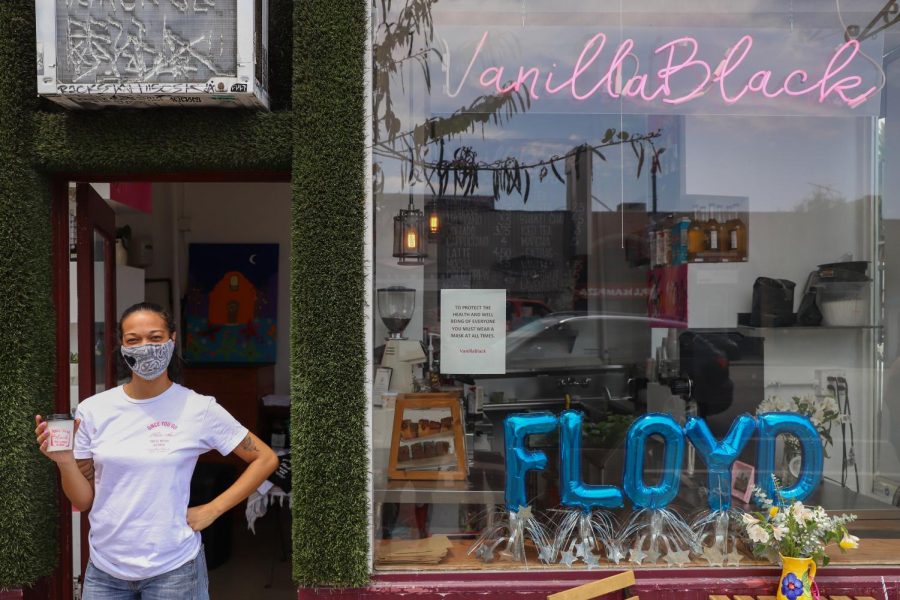 Vanessa Butler, the owner of VanillaBlack, stands at the entrance of the Echo Park coffee shop on Thursday, June 25, 2020. Butler said the coffee shop remained open throughout the pandemic with implemented safety precautions.

Outside of VanillaBlack coffee shop’s aesthetic storefront — synthetic grass-covered front with a pink neon “VanillaBlack” sign behind the window — in Echo Park, Justin Pineda and Megan Soskos took photos of their freshly-made lattes. Pineda and Soskos are part of the new wave of customers supporting Black-owned businesses due to the resurgence of the Black Lives Matter movement.

“The past month has been the most exciting support in the whole two-and-a-half years we’ve been open,” said Vanessa Butler, the owner of the cafe. “Not only from people in the neighborhood but people from all different communities, coming out and sharing. It’s been overwhelming — in a good way.”

Pineda and Soskos, first-time customers of VanillaBlack, found out about the shop on Instagram. Both purchased the Layla Latte, a drink named after Butler’s daughter.

“We wanted to support a Black-owned business because I feel like right now, especially, we’re all kind of in our own bubble and I think we forget that we should be supporting certain businesses that don’t exactly have a big chain attached to it,” Pineda said. “So I feel like at this time right now, it’s important to go around and support.”

Butler said there has been tremendous support since the protests erupted in late May. People from different communities have been supporting and sharing photos of their visits and drinks on social media.

“We need to support our communities in ways that’s not just going to the big corporations. We should be able to support our local businesses that are Black-owned, you get something that’s so personal like a Layla Latte,” Soksos said. “You can’t get anything like this anywhere else.”

Butler, 30, opened the shop with her best friend, Justine Zimbron, in December 2017.

Butler said she always wanted to own a business. At 22, she opened her own taco truck business in Scotland.

Her brother saw the opportunity for her to join the coffee business and she purchased the property that is now VanillaBlack in June 2017 while still living in Scotland. She said starting the coffee shop gave her a huge incentive to move back to Los Angeles with her 11-year-old daughter, Layla.

One of the main challenges for Butler in the first year was finding balance as a full-time mom and a business owner. Zimbron, who Butler said has been a great business partner, helps manage the cafe whenever Butler has to be with her daughter.

“My best friend Justine has been a huge part of the shop and the success of the shop since the beginning and she’s always been there for me. She always lets me know when I’m doing something that isn’t the right thing for myself or for the business,” Butler said.

“It was really challenging taking time away from (Layla) when I had to, to be a part of the business,” Butler said. “After the first year, I noticed the best thing for me and her and the future of my family, I had to be at the shop and be hands-on at the shop everyday and she definitely understands that now.”

Before opening VanillaBlack, Butler visited the cafes around Echo Park and took note of their menu choices, products and cafe designs for inspiration.

“We’re new to the neighborhood, so I have total respect for the businesses that have been here before us. I’ve never found it a competition, and I never really looked at it as being much of a challenge either,” Butler said. “I think all the shops have something different to offer and I’ve learned a lot from them.”

Butler, who grew up in Inglewood, said she wanted to offer her community and neighbors something authentic and affordable. One of the most affordable drinks VanillaBlack offers is the Neighborhood Brew — a 12-ounce coffee drink priced at $3.

She said VanillaBlack also gets inspiration for drinks from their employees, friends and family members.

“The Vanilla Bomb is one of our specialty drinks named after one of our former baristas, and the Layla Latte was created by my best friend,” Butler said. “We’re really open to involving our baristas and our friends having influence on what we offer to the community.”

Butler said VanillaBlack was able to stay open during the stay-at-home orders and that they have been taking precautions by wearing face masks and asking customers to maintain a social distance while waiting outside.

The cafe is small — just big enough to serve one customer at a time. Butler said she’s happy with her space but recently began considering moving to a bigger location.

“I don’t really have the space to sit down and talk to customers how I want to,” Butler said. “I would like a larger space to do more things with our community, like open mic nights, poetry, things to do with our community, be a comfortable place for people to relax and feel all love.”

Butler uses the storefront windows as a space to pay homage. Foil letter balloons behind the glass spelled out the name “Floyd”, in honor of George Floyd, since May 30. VanillaBlack previously had the names of Nipsey Hussle, Kobe and Gigi Bryant at its windows.

“Nipsey was a great man, a wonderful father — a leader in the community. He gave back to his people, and the same with Kobe, all the hard work and dedication and as a father,” she said. “I just think it’s important to highlight the Black community always.”

Hussle, the late rapper and entrepreneur, is a hero in the Crenshaw and Inglewood communities, where Butler grew up. She said he was a huge part of her upbringing and wanted to highlight him and other important people of color at her coffee shop.

“I feel like since a young age, I’ve been very involved in the Black community. I’ve been very aware of the challenges that Black and brown people face every day and I’ve always wanted to highlight all the amazing people that do amazing things in the world that don’t really get as much acknowledgment as maybe white skin people do,” Butler said.

As a new business, Butler said the Echo Park community has been accepting of them and she loves that the neighborhood holds its own authenticity and culture.

“Having people recognize that we’re here, we’re in this community and for people to acknowledge that and to give us that kind of recognition — I know myself, my staff and our families feel like we deserve,” Butler said. “It’s been great and we’re so thankful.”