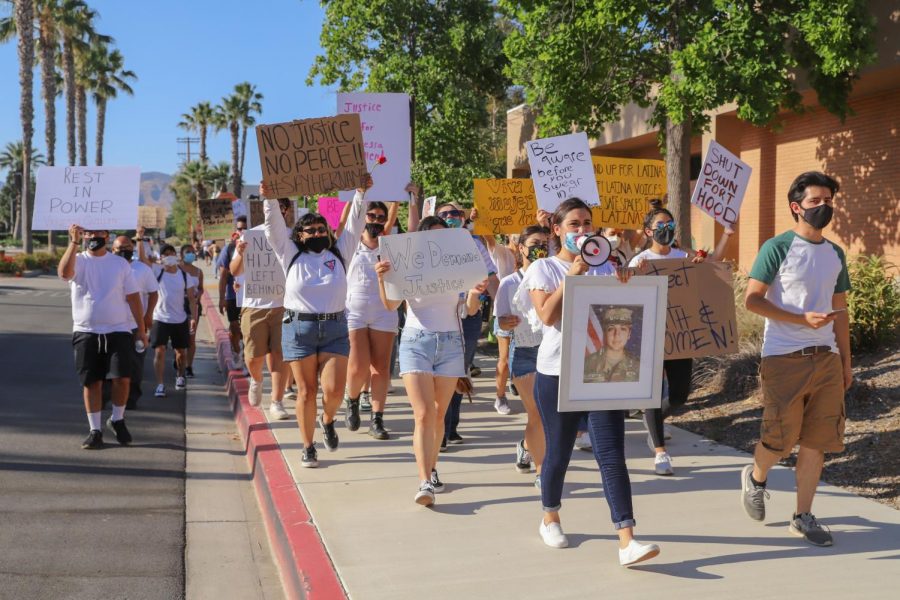 Around 50 protesters gathered at CSUN’s Chicanx House on Monday to bring awareness to the death of Vanessa Guillén, a 20-year-old U.S. Army soldier who disappeared from Fort Hood, a military base in Texas.

Investigators now suspect she was killed and dismembered by another solider who has since died by suicide.

Guillén’s family stated that Guillén confided to her mother about being sexually harassed in the military before she was killed.

“We are trying to spread awareness of the fact that sexual assault and femicide is something that happens in the workplace and households. This is a space to bring awareness to that issue,” said Ivan Salínas, an organizer for M.E.Ch.A. de CSUN.

“The military in (Black and brown) communities are ones that prey upon us, whether it’s through student recruitment in high schools or making it seem like going to the military is a fun thing to do. They make it seem like you’re going to be with comrades,” Salínas said. “When in reality, we have learned that the military is part of an imperialistic system.”

Organizer Maria Christina Medina, a senior and political science major, said that as a woman of color, she feels responsible to fight for change after the death of Guillén.

Danzantes, or Aztec dancers, from the Danza Canoga Cuauhtemoc group of the San Fernando Valley honored Guillén and her Latinx heritage through a ceremonial performance. Heavy drum beats followed the crowd as the danzantes marched with the crowd across campus.

Students chanted “Justicia por Vanessa,” and “Defund the military” in honor of the late soldier.

A local protester, Patty Lopez, brought her 16-year-old daughter to the protest. Lopez said that as a mother, it was heartbreaking to hear Guillén’s story and to see Guillén’s mother and daughters demand justice. She felt like Guillén was her daughter.

Lopez said she’s shared Guillén’s story on social media and encouraged her friends to share her story, especially those who are mothers.

She mentioned that people from her community told her not to go out and protest due to the coronavirus, but she doesn’t care.

She said that Latinos should not be afraid to speak out against injustice.

“If I’m going to die, I wanna die for justice,” Lopez said.

The crowd made their way back to the Chicanx house where the danzantes did their final performance and protesters could leave a flower at an altar dedicated to Guillén.

One of the danzantes ended the performance and said, “For the parents of Vanessa, who believed that (the army) was the best opportunity because sometimes there’s no money or scholarships to pay for school or fund their career. So many parents feel obligated to send their children there. We want justice!”