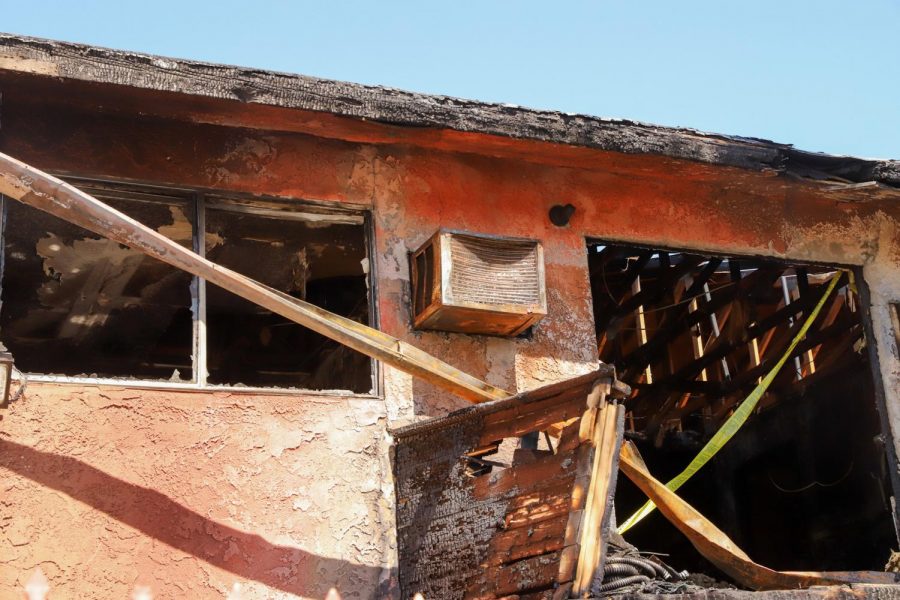 A burned apartment unit on the second floor of the complex. Most tenants have been staying the night with other family members or in hotels.

“I grabbed my dog first thing. We ran out of the building and the fire went from the palm trees all over the roof,” Figueroa said.

The July 4 fire damaged 16 units of an apartment complex on Wilbur Avenue in Northridge — half were damaged by the fire department’s efforts to put out the fire. Figueroa is one of 50 people who have been displaced by the fire.

An investigation led by the Los Angeles Fire Department determined illegal fireworks set several palm trees on fire, which eventually set fire to the roof of the building.

Figueroa and her family of five have been staying with family members at night and returning to the complex during the day, where most of the displaced neighbors have been spending their time outside. Neighbors from nearby apartment buildings have been bringing the displaced residents food and water.

The manager and property company was hesitant to reimburse rent payments for tenants immediately following the fire, but as of Tuesday have returned rent money and given those displaced a stipend for hotel costs, according to Figueroa.

The manager of the property declined to comment. The property company, Excel Residential Services, did not respond for comment.

Figueroa, 24, is a medical assistant who has been performing COVID-19 tests at work, and being outside with her neighbors has compounded the risks of spreading the virus.

“I feel like I risk myself already being around my family, so I try to distance myself even though we constantly get tested and I’m always negative,” Figueroa said. “I feel as if this kind of made it worse since we’re all just standing outside as a group.”

Most tenants have been staying the night with other family members or in hotels.

Figueroa said some don’t have family nearby and have been living in their cars. She has been outspoken on social media regarding the situation and treatment of her neighbors by the property owner.

Figueroa said the apartment complex manager gave residents a few days to collect their remaining belongings and threatened to call the police on the tenants staying outside.

“Most of us don’t have insurance, we don’t have that much money to get another place to move,” said Ericka Rivera, 43, a displaced resident.

Rivera said her apartment was completely damaged. She spends most of her days outside in the parking lot of the apartment complex and her family stays in a hotel at night.

“We’re looking for someone to help us. (The apartment manager) just came to give us our rent back but they don’t tell us anything else, they don’t want to put us in a shelter or anything,” Rivera said.

A nearby elementary school, Napa Street Dual Language Elementary, organized a community donation center at their auditorium to help families of students who have been displaced. An announcement was posted on Facebook to let the community know about their efforts.

“Calling all Napa families! We need your food, clothing and money donations to help the 5 families who were deeply affected by the fire that burned 8 units at the apartment building on the corner of Wilbur and Parthenia last night,” the post said.

On Tuesday and Wednesday, staff collected donations from 9 a.m. to 2 p.m.

Although the school originally only planned on collecting donations for 10 children and 10 adults, Rivera asked for more aid.

“I just talked to one of the coordinators and she told me that she didn’t know about all the 16 apartments that were damaged,” said Rivera. “So they’re going to do some kind of donations for all of us.”

Figueroa organized a GoFundMe campaign to raise relief for the 16 families affected by the fire. Over $7,700 has been raised towards the $16,000 goal as of Saturday. Figueroa hopes to split the donations and provide $1,000 per family.

She warned against donating to any imposter fundraisers, as some tenants whose apartments were not affected by the fire are using the situation to scam well-intentioned people.