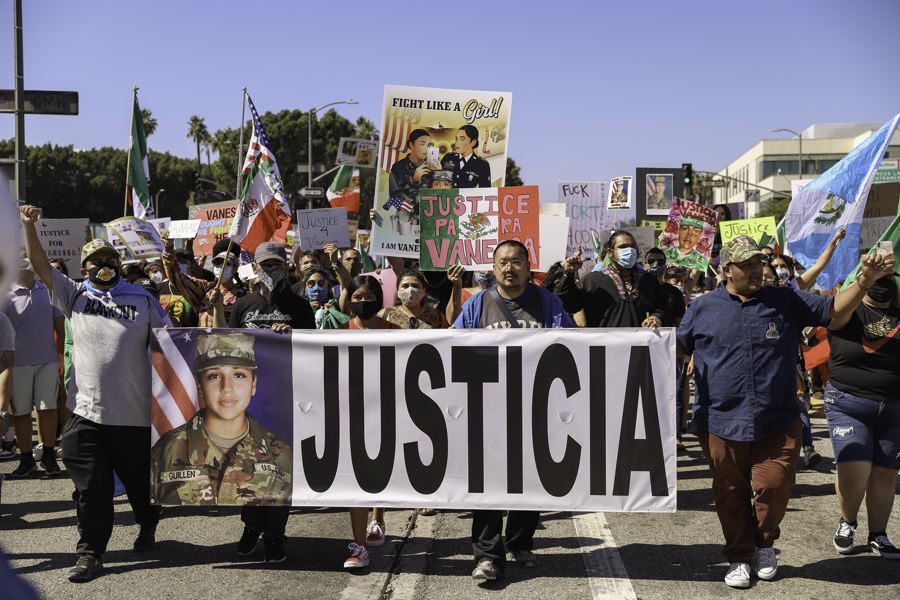 Approximately 500 protesters crowded Olvera Street at 2 p.m. and marched the streets of downtown Los Angeles in support of the “Massive Protest for Vanessa Guillén” on Saturday.

The protest’s purpose was to bring awareness to and demand justice for the deaths of Vanessa Guillén and Enrique Roman-Martinez — two young Latinos who both mysteriously died during their service in the military.

Guillén, a 20-year-old U.S. Army soldier, disappeared on April 22 from Fort Hood, an army base in Texas. Guillén’s family alleges Guillén was a victim of sexual harassment.

According to investigators, another soldier killed Guillén and disposed of her body with help from an accomplice. The soldier, Aaron Robinson, has since died by suicide while his accomplice, Cecily Anne Aguilar, faces a federal charge of conspiracy to tamper with evidence, according to CNN.

The protest began with an indigenous dance ritual by danzantes followed by introduction speeches from Heron Castillo, the leader of the march, and Griselda Martinez, the sister of Roman-Martinez.

Martinez said her brother, who was stationed in Fort Bragg, North Carolina, went on a camping trip with seven other soldiers from the same base for Memorial Day weekend. They all came back except for her brother, whose partial remains were found six days later on a nearby island. Her brother was a 21-year-old from Chino, California where he graduated from Buena Vista High School in 2016.

“I’ve always been told that the army is honorable, respectful and disciplined,” Martinez said. “I was told that the people he was with were going to watch out for him, but they didn’t do that. My brother is never coming back.”

More guest speakers followed, including Maricela Guzman, a Navy veteran, who said she was raped while in boot camp. Guzman said she tried to report the rape but nobody listened to her, so she stayed quiet about it throughout her service. Now, Guzman said she is advocating for mental health services in the military.

“I am very inspired by the people here,” Guzman said. “It’s a great turnout and to be able to hear our stories, our voices and for people to listen. It’s just very incredible and I am inspired by them too.”

Around 3 p.m. Castillo led protesters down Alameda Street. The crowd chanted “Justicia Para Vanessa” while the danzantes performed a ceremonial dance ahead of them.

A harmony of beating drums, car horn honks and loud chants echoed throughout East Temple Street as protesters made their way to City Hall, where they concluded the march with closing remarks from additional guest speakers.