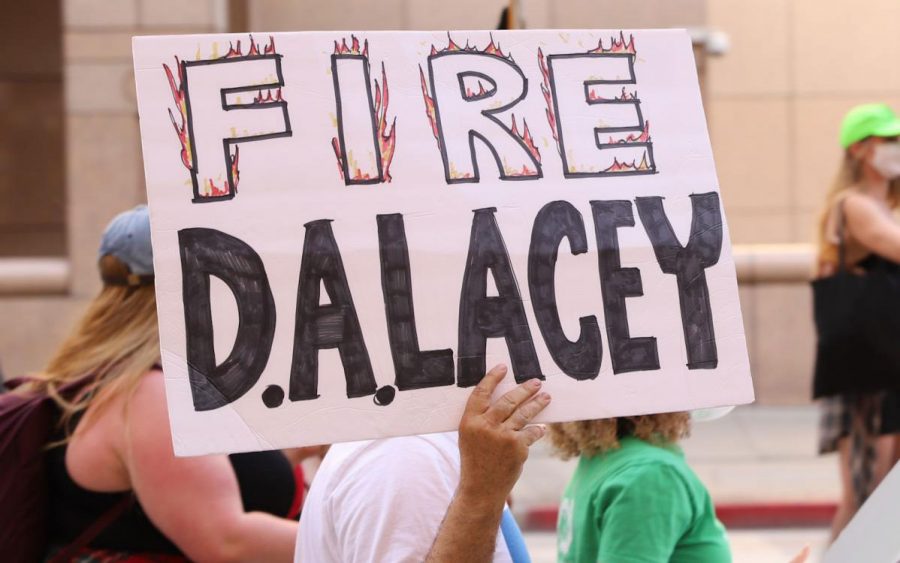 A protester holds up a sign saying "fire D.A. Lacey" during a BLM protest against the district attorney, Jackie Lacey. Jackie Lacey's husband, David Lacey, is charged with three counts of misdemeanor assault with a firearm on Tuesday.

Editor’s Note: Revised as additional information by Justin Marks was provided on Aug. 5.

#BREAKING This morning Los Angeles District Attorney Jackie Lacey’s husband pulled a gun out on Black Lives Matter activists who protested his wife in front of their house. @BLMLA pic.twitter.com/wnCFMMvaWV

The case was investigated by the Los Angeles Police Department, and will be prosecuted by the California Department of Justice to avoid a conflict of interest with Jackie Lacey’s position as district attorney.

Protesters went to the couple’s home demanding to have a conversation about police accountability. BLM-L.A. has long claimed Jackie Lacey does not prosecute “killer cops.”

In a video recorded by a BLM activist, Abdullah can be heard asking, “Are you going to shoot me?” David Lacey is seen waving a gun in activists’ faces as he says, “I will shoot you. Get off my porch.”

In a press conference on March 2, Jackie Lacey gave a public apology but stated that “(her husband’s) response was in fear.” She cited death threats made in the weeks leading up to the incident as the reason for her husband’s fear.

Abdullah responded to Jackie Lacey’s public apology, stating that “(David Lacey’s) finger was on the trigger and he trained the gun at my chest. I am a mother.”

Carl Douglas, the civil rights attorney who notably represented O.J. Simpson in his murder trial, will represent the activists.

Douglas argues against Jackie Lacey’s argument that her husband was acting out of fear, stating that the home was equipped with a doorbell camera which would have shown that the protesters were unarmed.

David Lacey’s attorney, Samuel Tyre, told CNN in a statement on Tuesday that he is “disappointed” in the charges.

According to the state attorney general’s office, an arraignment is scheduled for Aug.13.