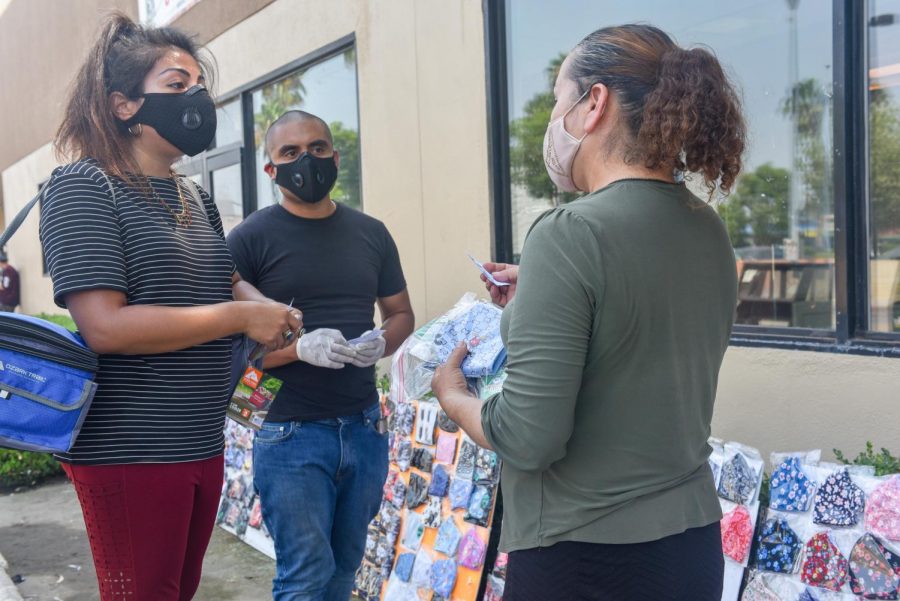 Gaby Moreira-Rodriguez, a Las Calles Del Valle organizer, hands a vendor a protection package and a "Know Your Rights" information card, during a distribution in Panorama City, Calif.

Working in the heat of a summer day in the San Fernando Valley, volunteers filled coolers with cold bottled water and assembled packages to distribute to local street vendors in Panorama City and the West Valley on Saturday.

Las Calles Del Valle started as a concept between friends wanting to help their immediate neighbors, but has since morphed into a movement to serve as a support system for vendors in streets of the San Fernando Valley.

The organization, which was established in late July, works to raise awareness about the harassment and hazards street vendors face against disrespectful patrons, racial discrimination and the language barrier which prevents them from defending themselves during confrontations with the authority.

“We aim to educate our community on street vendors and how much work it takes to start a small business, we want to be their voice,” said Sebastian Araujo, a law student at UCLA and organizer for Las Calles Del Valle. “Community organizing can lead to big change.”

“This might be scary stuff for them because I know that some of them don’t speak English,” Araujo said. “We want to be able to assist them if there is any kind of situation.”

After a number of videos and articles began circulating on social media this summer of vendors being physically and verbally harassed while on the job, a few of the organizers turned their weekly Zoom discussions into brainstorm sessions, inspired by the Black Lives Matter protests and the people in their neighborhoods to form a solid foundation.

“These protests inspired us to go out there and fight for justice without any hesitation,” said Stephanie Martinez, a CSUN sociology senior. “And what better way to start than by putting a focus on our local street vendors.”

The team quickly grew to about ten volunteers, and they began interviewing vendors around the Panorama City area about their work needs and safety concerns.

Once they collaborated on the organization’s name and presence on social media, the organizers arranged a GoFundMe campaign to fundraise and buy products for vendors. Las Calles Del Valle received a wave of unexpected donations from the online community, who reached out with kind words and advice.

“We were expecting support because the San Fernando Valley is a very ‘people’ city, but we didn’t know that the word was going to spread very quickly,” Araujo said.

Within a week of fundraising they met their goal of $1,500. The team then purchased the items that were sorted into roughly 60 “protection packages” for street vendors.

The organization promised transparency with the community and their donors, so every receipt and document collected through spending can be seen on the Las Calles Del Valle’s Instagram page, which has been an effective platform for the team.

“Whatever we are spending the money on, we are going to make sure the community is aware of it,” Araujo said.

As they prepared for their second day of delivering packages, the organizers divided into two teams to distribute across the Valley. After the essentials were accounted for, the volunteers used remaining funds to purchase coolers, which they filled with fresh ice and bottled water at Devonwood Park.

After heading to an area popular for vendors right outside of the Panorama Mall, one vendor , who goes by the name of Merari, mentioned that while she has only been selling freshly-made beverages for two weeks, she understands how vital street vending is for many in the community.

“[Us] vendors, we do this out of necessity, not because we are here to bother anyone,” Merari said.

Pedro Cortez, a street vendor, started selling masks after his business in the mall shut down due to the pandemic. Cortez said that he has yet to hear about when they would reopen.

The vendor discussed how his business “has slowed down a lot since everyone already has masks now,” and currently remains uncertain about the future once he sells the remaining products.

Cortez later donated a bag of dual-purpose ballpoint pens with sanitizer on one end, which he hopes Las Calles Del Valle will add to the protection packages.

“We all know each other here. Nothing has ever happened, but if [something] were to happen, we would help out,” Cortez says. “It’s beautiful, knowing that we give a helping hand to one another. It’s great work what [Las Calles Del Valle] is doing.”

Araujo said the organization is coming up with future action items for people to contribute to Las Calles Del Valle’s mission. Their ideas vary from encouraging supporters to “buy-out” local street vendors’ products until they are completely out of stock, to developing a rapid response team that would be dispatched to help street vendors in crisis.

“The mission is to establish a safe place for people to come together and help one another, our goal is to expand far enough to help other groups who also face adversities by this unjust social climate we are living in,” Martinez said.

The group is already hoping to organize a post-COVID “street vendors day festival” to celebrate street vendors, small businesses, local musicians, and artists in the area.

“It would be a great bonding moment for our community, especially because we have a lot of talent in the Valley,” Araujo said. “This would be a great opportunity for our people who are less recognized.”