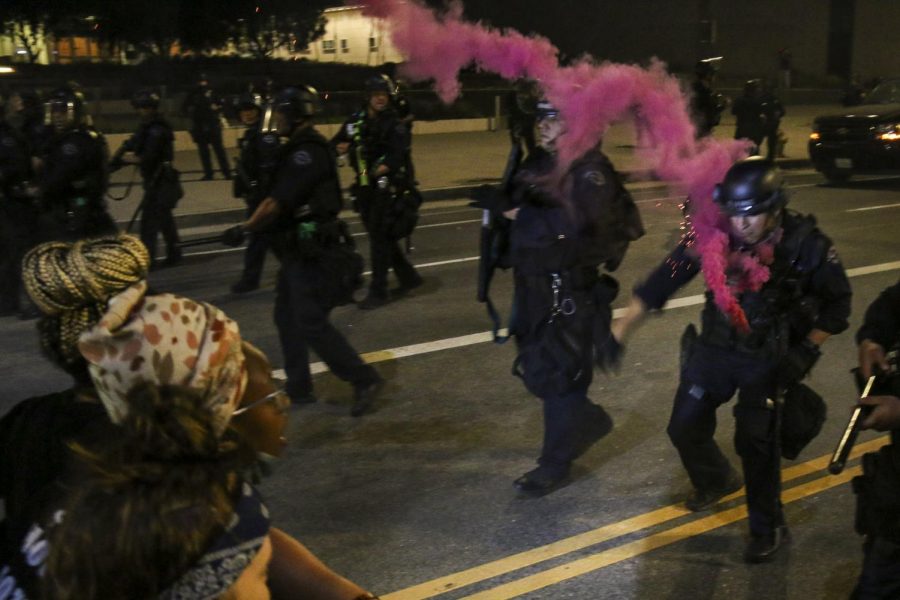 A police officer gets hit with a red smoke bomb.

DOWNTOWN LOS ANGELES — A few hundred people gathered at the Los Angeles City Hall on Monday night to seek justice for two Black men who were recently shot by police.

Jacob Blake was shot several times in the back by police in Kenosha, Wisconsin on Sunday. Anthony McClain, was another man who was shot by police in Pasadena, California on Thursday.

Protests began around 9 p.m. with people of different ages and ethnicities chanting in front of the City Hall — which was illuminated purple and gold for Kobe Bryant’s birthday — as a police helicopter circled overhead.

Lucha Wright from the Revolution Club Los Angeles explained to the crowd the importance of spreading awareness about police brutality and using community policing to protect the city.

“We have to get millions in the streets screaming ‘Black lives matter,’” Wright said.

After walking to the intersection of Third and Hill streets,  the group settled outside of the Los Angeles Police Department headquarters. The chants calling for justice then shifted towards defunding the LAPD.

The group then toppled the roughly 4-foot metal barricade over, allowing the group to approach the small group of LAPD officers guarding the headquarters.

LAPD reinforcements quickly arrived, declaring the protest an unlawful assembly, thus starting the game of cat and mouse for the night.

As protesters failed to disperse, LAPD used their tactics of rushing through the crowd to create chaos and to disperse the crowd, as well as firing flashbangs and rubber bullets. Many of the demonstrators were prepared for this, some wearing body armor, helmets and other personal protective equipment. At one point in the protest, some protesters threw smoke bombs at the police.

The chase through the city lasted roughly an hour. It is unclear if there were any arrests.