How I spent my COVID-19 summer: Climbing Half Dome 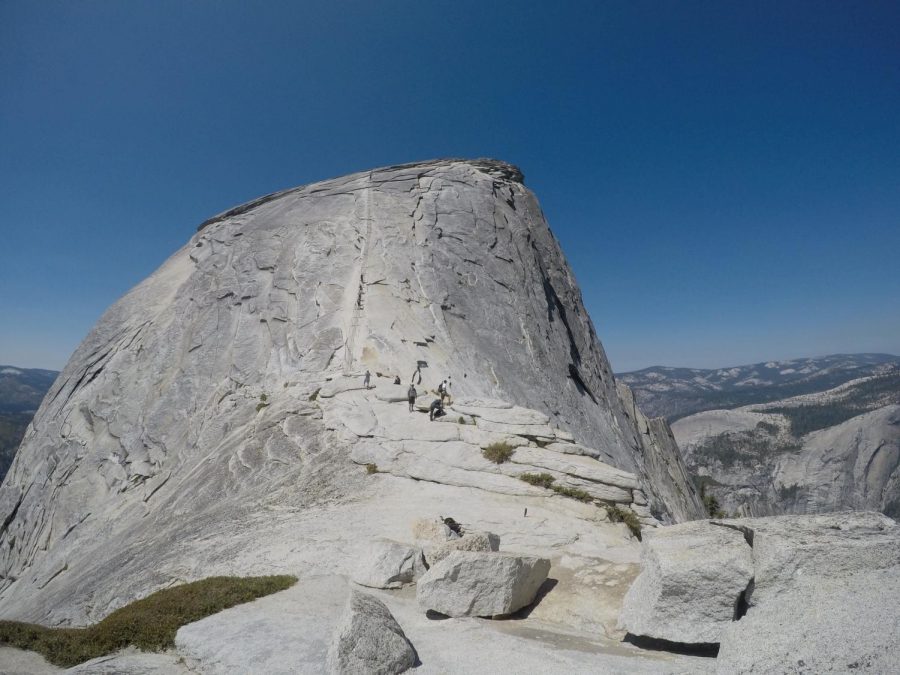 The "final stretch" before reaching the summit of Half Dome.

As I unzipped my tent at 4:45 a.m., I never had as much energy and adrenaline flowing through my veins. The previous night had been spent waking up and repeatedly asking myself, “Is it time yet?”

Sleep was an afterthought. My brother, his close friend and I were ready to get the earliest start we could to avoid the heat later in the day.

Towering nearly 5,000 feet above the Yosemite National Park’s valley floor rests its ultimate landmark: Half Dome, accessible via a 16-mile hike with over a mile in elevation gain featuring waterfalls, high valleys and glacier-sculpted rock.

We sped to the starting point with our backpacks already full with our gear needed for the day: food, water, maps and first aid supplies.

The aptly named Mist Trail, a trail where you can hike through the mist from Vernal Falls if the wind is blowing in the right direction, is the starting point for the full-day hike of Half Dome and the first checkpoint on the journey. Normally a hotspot for tourists and amateur hikers, it remained desolate in the dim light of sunrise. As we passed fellow hikers, we muttered between our half breaths, “Half Dome?” and they responded with a smile, “Yes.”

We made it to the top of Nevada Falls, the second checkpoint, after two hours of climbing up rocky steps and crevasses. Next up, Little Yosemite Valley starts with a nice flat area of sand where you are able to rest. However after only about a mile, the trail starts a long and challenging series of raised zig-zagging trails, known as switchbacks, where you gain significant elevation.

Little Yosemite Valley was the most physically challenging part of the hike for me personally. After finally reaching a steep ridge, you begin to realize that there is still much more to go. As you gain elevation in this section the scenery does not change; similar to a halloween corn maze where the end is not visible until you reach it.

Half Dome is often called the Ultimate Day Hike. Unlike most popular day hikes, Half Dome involves more than just trails. Half Dome is famous for its steel cables that allow climbers to climb the final and steepest portion of it.

As our group arrived at the ranger station at Half Dome, the park ranger confirmed our permit to summit and gave us the green light. We smiled in excitement and had to ask her about what was ahead of us at the cables. “I don’t usually go up there. It’s kinda sketchy to me,” she said.

There was a brief pause, we looked at each other and smiled but we realized the park ranger was not joking.

“We’ll see you on the way down,” I said jokingly, trying to alleviate the tension as we walked away.

Before the cables is an area called Subdome. It is a steep and windy rock path at the base of Half Dome that must be climbed before you reach the cables. Parts of the trail have man-made steps but there are parts where you have to improvise your way to the top.

The feeling of reaching the cables was an accomplishment in and of itself, however, the true landmark lies at the other end. We reached into our bags and pulled out our gloves in order to secure a safe grip on the cables. Parts of the climb are at a 45-degree angle and the only thing keeping you on the slick granite is the traction of your shoes and your grip on the cables. Between each steel post is a piece of 2-by-4 wooden plank that you can anchor your feet on.

The way up is very physical like a game of tug of war with the cables, constantly pulling yourself up. The added level of difficulty comes with the traffic on the cables. The people coming up and going down “share the road” with you. Our group knew the longer we stayed on the cables, the more exhaustion and danger we faced. We moved as fast as we could and volunteered to keep moving while people took rests.

People going up faced physical exhaustion, but people coming down faced mental exhaustion and fear. The biggest traffic jams happened at a few points where the edge of the rock going down dipped a few inches over the next slab of granite. Hikers climbing up had to pull themselves over this ledge. However for those coming down, it meant stepping over what seemed like a cliff.

After about 20 minutes of climbing, we began to see the cables become less steep and hear the chatter of climbers on the top. After a few more series of wooden planks, we saw the people getting ready to come down.

Reaching the top was a breath of fresh air. It is larger than a football field and concave like a crater. It looks like the surface of the moon with scattered rocks everywhere. We ate some of our lunch and ventured around for about 45 minutes, peeking over the edge and staring down at the valley which seemed like a world apart. I do not have a fear of heights but the drop-offs will make anyone sane cautious of getting too close to the edge.

After sightseeing and testing our acrophobia, it was time to get ready to descend the cables. On our way up, we heard almost every descending climber tell us it is harder to go down than up. Most climbers go down the cables like a ladder, facing the granite and tiptoeing to avoid looking down. This is not only harder but it’s also much more work. As we watched the majority of climbers descend like this as we climbed up, we knew we had to climb facing down and staring at the drop-off.

The idea of climbing down the cables looking down was frightening to all of us. Your mind just simply does not want to do it at first. After descending the first few planks it gets steeper and you begin to realize why the people coming down prefer to look away. However, it is undoubtedly the right way because you have better grip with your shoes and can see where your feet are gripping the rock. You have to gently slide down through some portions and being able to watch the slope makes it much safer.

Reaching the end of the cables was a sigh of relief, as the rest of the trip was a breeze from that point on. The trip took us about 10 hours in total, including time at the summit.

If you have the scarce opportunity to secure a permit to do Half Dome, you should do the hike; it is a once in a lifetime experience that you will remember for the rest of your life. Even if it means trying and not reaching the summit, it is still well worth the experience.

I know that it would not be the last time I do it — I am already planning on going back.