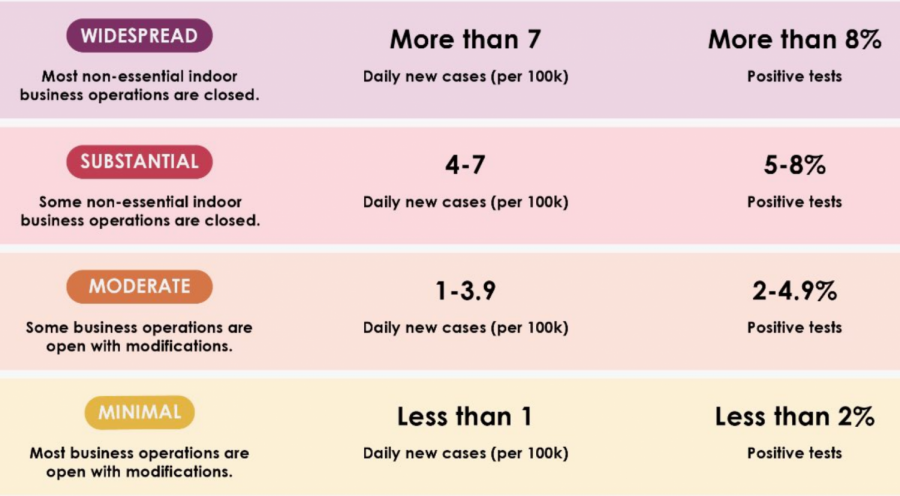 Gov. Gavin Newsom introduced "Blueprint for a Safer Economy," a four-tiered and color-coded system that shifts away from the previous "watch list" system, on Friday, Aug. 28, 2020.

Gov. Gavin Newsom announced a new reopening plan for businesses and schools in California during a press briefing on Friday.

The new plan indicates county risk level through positive testing rate and case count in a given county. Notably, the reopening plan is color-coded and four-tiered.

The new system is meant to be easier to comprehend for businesses and the public, according to Newsom.

“We believe this is much more simple, much more transparent, [and] much more easily monitored by individuals,” Newsom said.

Newsom said that the goal of the system is for counties to show consistent success in decreasing case numbers and positive test results and provide a more transparent method of tracking cases.

As counties move up in the system, more businesses can reopen. The tiers, according to the state of California’s COVID-19 website, are as follows:

In order to move to the next tier, counties must meet the next tier’s requirements for two straight weeks. There is a mandatory 21-day waiting period between moving up a tier. Counties can only move up one tier at a time.

Los Angeles County is currently at the widespread level, with 13.1 new daily cases per 100,000 people and a 5% positivity rate, according to California’s COVID-19 website.

Although nail salons, hair salons, and barbershops can reopen under the new state guidelines, the Los Angeles County Department of Public Health announced today that those businesses still cannot resume indoor operations within the county, but they are allowed to operate if their services are moved outdoors.

The new system uses risk factors, such as the ability to accommodate wearing a face mask at all times, physical distancing, the ability to limit the duration of exposure and the ability to limit activities that increase the spread of COVID-19 like singing and yelling, to assess what kinds of businesses can reopen, according to the California Department of Public Health.

The previous “watch list” system — which used a combination of data from hospitalizations, case numbers and community transmission to dictate which counties could reopen certain businesses — had issues throughout its use. In late May, Newsom began reopening California, but a surge of cases in July prompted the closure of many businesses again.

In early August, California Health & Human Services Secretary Dr. Mark Gahly said in a virtual press briefing that a technical issue with the state of California’s testing database, the California Reportable Disease Information Exchange, caused a backlog in reporting about 250,000-300,000 cases. This backlog led to a miscount in cases.