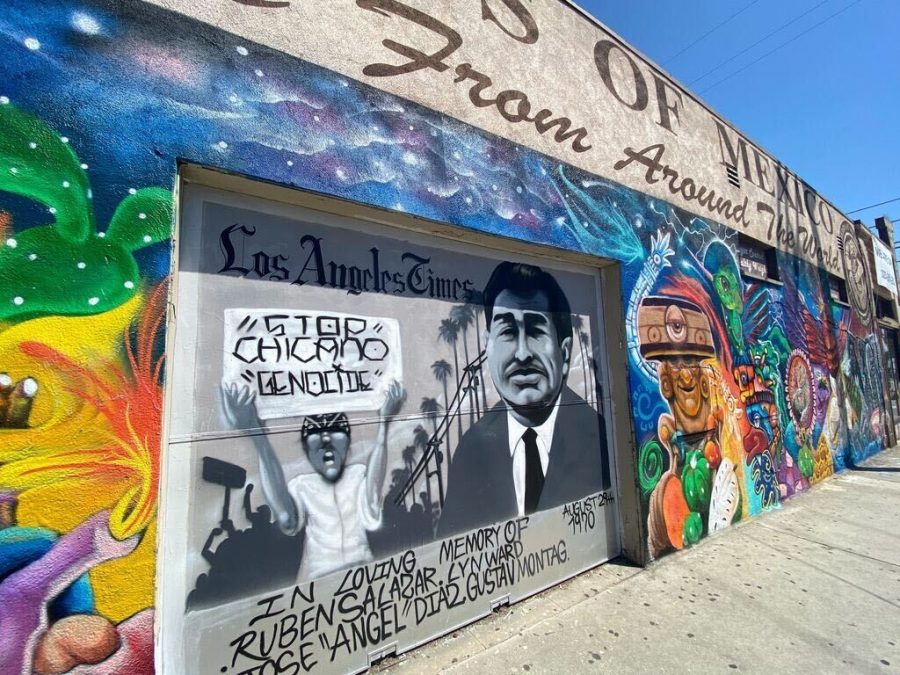 A mural of Ruben Salazar, an influential Latino journalist who covered the Chicano movement, a block away from the Ruben Salazar Park in East Los Angeles, Calif.

Saturday marks the 50th anniversary of the Chicano Moratorium, the peaceful march that turned violent and resulted in lives lost when law enforcement clashed with those marching on Aug. 29, 1970.

One of the lives lost on that day was Ruben Salazar, who continues to influence Los Angeles-based Latino journalists today. He interviewed the most prominent figures of the 1960s, from Cesar Chavez to President Dwight D. Eisenhower and President Richard Nixon.

Born in Ciudad Juarez, Mexico, in 1928, Salazar was raised in El Paso, Texas, where his family lived after immigrating to the United States.

Growing up, Salazar did not experience the level of discrimination that he advocated against later in his life. He remembered his mother imparting the American life onto him. Salazar quoted his mother saying, “You are American, my son, not a nasty Mexican Indian,” as revealed in the PBS documentary, “Ruben Salazar: A Man in the Middle.”

“Because I wasn’t too dark, I was treated better than the darker Mexicans,” Salazar said in the documentary.

He attended Texas Western University where he earned his bachelor’s degree in journalism in 1954.

His investigative reporting was impressive from a young age. As a contributor at the El Paso Herald-Post, Salazar intentionally got himself arrested on a phony drunk charge in order to get a first-hand experience of the inmates’ living conditions in the El Paso City Jail.

While observing and living among the inmates, he witnessed prisoners take narcotics and had his life threatened by a prisoner by the name of Red. Salazar called the El Paso Herald Post to bail him out after spending only 25 hours in jail.

“I decided to end my experiment in misery. I called The Herald Post and asked to be freed. I had intended to stay longer. I couldn’t,” Salazar wrote in the article. “I lived in a Chamber of Horrors.”

Salazar moved to California where he worked for the Santa Rosa Press Democrat and San Francisco News.

He then cemented his name as “one of the most renowned Mexican American journalists of the 20th century” by writing on such topics like police brutality and the injustices against Mexican Americans and Latino communities.

Salazar began his career with the Los Angeles Times in 1959, at a time where among 120 people in a newsroom, he stood out among his predominantly white male peers.

During his time at the L.A. Times, Salazar was a foreign correspondent who covered stories in the Dominican Republic, Mexico, Cuba and Central America.

Salazar was assigned as chief at the Mexico City office, where he continued his work before returning to the United States to cover the civil unrest in the Mexican American communities of L.A.

East Los Angeles was the epicenter of social justice momentum, with the Latino and Chicano community leading the way in change. The Watts Riots of 1965 inspired the youth to organize anti-Vietnam protests, which coincided with the racial and socioeconomic injustices that haunted their neighborhoods for decades.

In an interview seen on the PBS documentary, Salazar shared the frustrations of an oppressed generation with a candid answer: “It’s easy for the establishment to say, ‘Aren’t we all the same? Aren’t we all American?’ Well, obviously we are not. Otherwise, we wouldn’t be in the revolutionary process we are in now.”

Robert Lopez, an investigative reporter at the L.A. Times, wrote in his article “Chasing Salazar” that they were “growing tensions between Chicano activists and the Los Angeles Police Department and Los Angeles County Sheriff’s Department.”

Salazar took it upon himself to cover a peaceful, anti-Vietnam protest at Belvedere Park in East L.A. on Aug. 29, 1970 for KMEX, the Spanish-language television station and became the news director that same year.

At the protest meant to bring awareness to the alarming number of Latino casualties in the Vietnam war, a crowd of Brown Berets — a pro-Chicano organization that emerged during the Chicano Movement in the late 1960s — and young children marched across the park.

What followed at the National Chicano Moratorium Against the Vietnam War disrupted the quiet protest. Flying teargas canisters and swinging batons were visible only through the layers of rising smoke and running brown bodies. The once peaceful protest was rattled by the excessive violence and abuse, which many believe were by the hands of the police.

In between the haze, Salazar took refuge at the Silver Dollar Bar on Whittier Boulevard and La Verne Avenue. He took a seat and drank a beer before the LAPD responded to a call about armed patrons at the same location.

“Deputies fired several tear gas projectiles through the curtained doorway, including a 10-inch torpedo-shaped missile designed to rip through plywood in barricade situations. It struck the 42-year-old Salazar in the head, killing him,” Lopez wrote. The officer who shot the projectile was never arrested.

“In the end, Salazar died from the very type of law enforcement abuse he was trying to expose,” Lopez said.

Today, the social climate is eerily similar. Despite half a century of protesting, resisting and rising from historical oppression, communities of color continue to be exploited and abused by those held in positions of power.

The L.A. Times hosted “The Chicano Moratorium Forum” on Thursday where Daniel Hernandez, a culture reporter at the Times, described an incident involving Adolfo Guzman Lopez, a KKPC radio reporter from Long Beach, who “felt targeted” at a George Floyd protest after being hit by a “gummy bullet in the throat.”

Hernandez explained the significance of Salazar’s story and the impact that his death has had on Latino journalists in the field today.

“It’s kind of this typical thing, where some of these incidents are still happening. I think it’s a good opportunity for us as a society here in L.A., to really reinforce the idea that free speech is one of the pillars of our democracy, and the free press is as well,” Hernandez said.

Lopez, who was also in attendance at the forum, discussed the lack of accountability from the law and government, specifically in non-white communities.

“In many ways, it was really the wild west in terms of policing, there was a lot of abuse,” Lopez said. “People weren’t held accountable.”

In his article published on Feb. 6, 1970, “Who is Chicano? And What Is It a Chicano Wants,” Salazar wrote: “Chicanos feel cheated. They want to effect change. Now.”

His bold approach to reporting has seamlessly influenced newer generations of journalists who do not shy away from unveiling the racial injustices and corruption in the government.

“Ruben Salazar’s legacy is one that many journalists aspire, sometimes without even realizing it,” Hernandez said.

An important modern figure in Latino journalism and anchor for Univision, Mexican-born Jorge Ramos, was physically escorted out of a press conference by then-presidential candidate Donald J. Trump in 2015, according to NPR.

“I think the best journalism happens when you take a stand, and when it comes to racism, discrimination, corruption, public life, dictatorship or human rights, as journalists, we are not only required but we are forced to take a stand,” he said.

“If a newsroom doesn’t cover the communities it covers. It doesn’t understand them. It doesn’t report on issues accurately and it doesn’t provide a voice where communities need a voice,” Lopez said. “These are the very things Salazar represented and did as a journalist.”