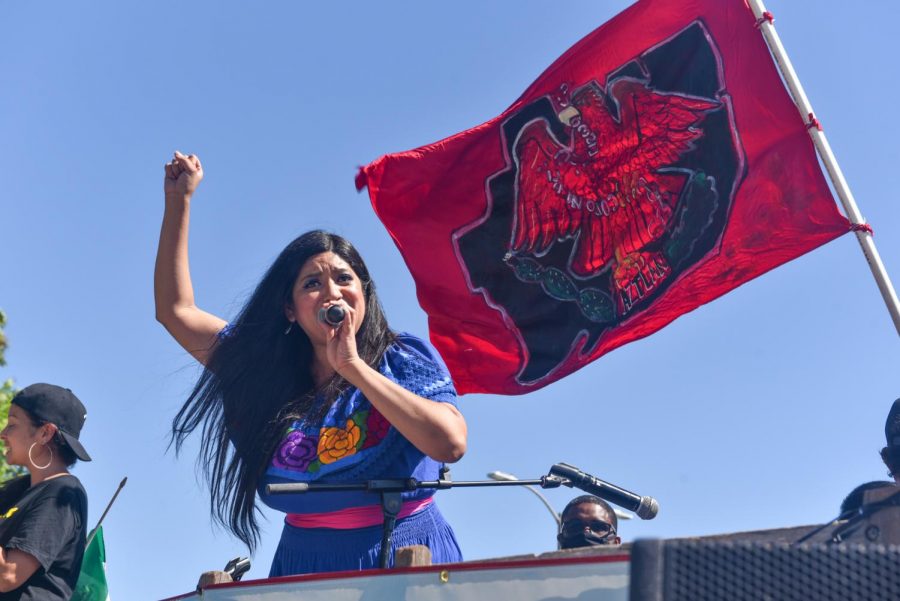 Zada Musica, a Los Angeles artist, performs during rally for the 50th anniversary of the Chicano Moratorium on Saturday, Aug. 29, 2020 in East Los Angeles, Calif.

The words “Si Se Puede” and “Que Viva La Raza” echoed throughout Whittier Boulevard on Saturday afternoon — the 50th anniversary of the Chicano Moratorium. Around 500 protesters gathered at Ruben Salazar Park in East Los Angeles following the march for a series of speakers and performers.

The Chicano Moratorium was a movement that organized demonstrations and marches in an effort to raise awareness of civil rights issues among Mexican American community and the poor and working class Latinos that were killed in the Vietnam War.

The movement demanded an end to racism, white supremacy, police killings and the drafting of Chicano military members into wars. They also demanded legalization for all, environmental justice and women’s liberation.

At Saturday’s rally, the 50th Chicano Moratorium Committee and Centro Community Service Organization, organizers honored the lives that were lost from the Vietnam War and from police brutality.

A parade of vehicles drove down Whittier Boulevard with signs and flags of Mexico, and flags with the words “Black Lives Matter” on it.

Street vendors sold hot dogs and ice cream to those participating. The organizers of the march reminded the crowds to support the vendors during the speeches.

A Los Angeles artist who goes by the name of Zada Musica performed during the rally. She said most of her music is inspired by Chicana and Chicano activism.

“I’m Chicana, I went to Theodore Roosevelt Senior High School and I took music there so that’s where I learned music … that’s where I started my activism,” Zada said. “I remember learning about the Chicano walk-outs and seeing pictures of Carlos Montes protesting and that was so big in our history.”

Zada teaches for the Los Angeles Unified School District. She said her inspiration for her song, “Fuera Ya,” came from joining the United Teachers Los Angeles protest in 2019.

“I saw the need for music that spoke about these injustices, so I joined Centro CSO with Carlos Montes, so I’m working with one of my idols and he’s showing me how to be an activist and he’s definitely helping promote the music of the movement,” Zada said. “That’s why I’m here supporting history and my community.”

Filiberto Gonzalez, a CSUN alumni and Chicano Studies major, attended the Chicano Moratorium 25 years ago and has been looking forward to this day. He said he wanted to bring his daughters to the rally.

“Now that I’m a father with children, I wanted them to see this as well,” Gonzalez said. “I’m glad to see that hundreds of people came out.”

Gonzalez said it’s important for all generations to come together to help educate one another about the history of the Chicano Moratorium.

“These events consist of all generations — it can’t just be young people because the young people don’t really know that they’re a part of a continuum, that the baton is being passed to them, they won’t see that, they won’t hear that, unless my generation and older generations are all here at the same time and provide that context for younger people,” Gonzalez said. “I hope that my daughters can get a little bit of that and that we can continue the education.”