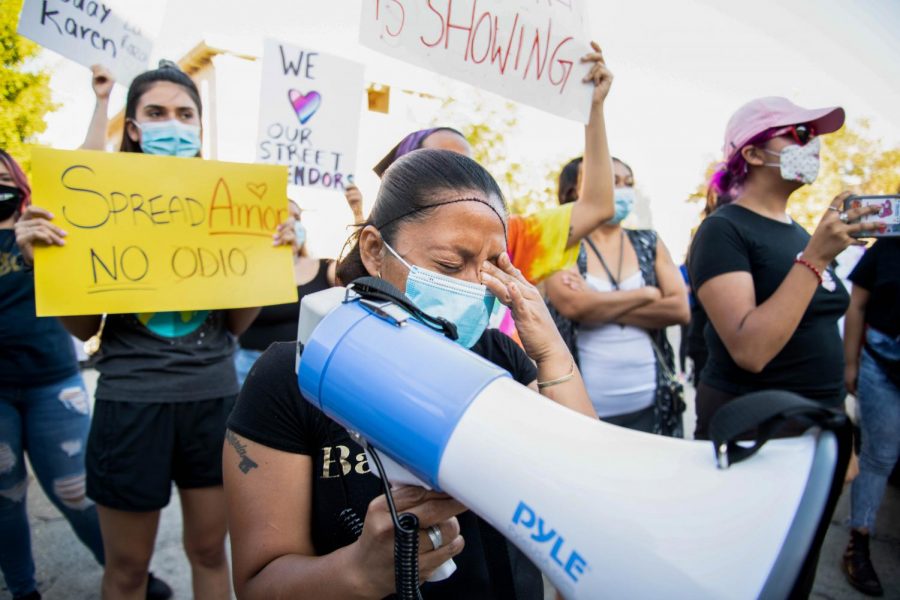 Ana Celis breaks down as she stands in front of "Canoga Karen's" apartment during the Canoga Karen Protest in Canoga Park, Calif., on Saturday, Aug. 29, 2020.

Protesters gathered on Saturday to support Ana Celis and Adolfo Castro, food vendors who say they have been facing harassment and racism from a resident who lives near their stand.

The protest was organized by Las Calles Del Valle, a new activist group in Canoga Park who focus on supporting and protecting street vendors. Their first outreach event was last week, where they distributed packages filled with necessities – such as face masks – to street vendors in the San Fernando Valley.

Celis and Castro are immigrants from Guatemala who have been in the U.S. for over 10 years. At their stand, they sell homemade pupusas — a thick griddled bread filled with meat — and tacos.

Ana and Adolfo say the same resident has been coming to their stand and harassing them at least once a day for nearly two months, according to Celis. According to a video posted on Instagram, the resident told the couple to, “go back to Mexico so that someone could kill them,” and threatened to call the police and get them deported.

Multiple organizers said that the resident also threw rocks and what appeared to be a bag of feces at the couple. In one video also posted on Instagram, the resident got into a heated exchange with Michael Mastrodomoncio, a member of Las Calles Del Valle .

“You are illegal,” the resident yelled in the video. “You use food stamp money.”

Organizers tried to file a police report on Celis and Castro’s behalf after several of these incidents, but Mastrodomencio said that the police refused to do anything unless officers were present when an attack happened.

When the police report was unsuccessful, friends and neighbors of Celis and Castro decided to protest. For some members of Las Calles Del Valle, the attacks felt personal.

“A lot of us grew up around street vendors, they’re a part of childhood communities … for us to not support them wouldn’t be right,” said Brina Alvarado, one of the founders of Las Calles Del Valle.

“A lot of us grew up around street vendors, they’re a part of childhood communities … for us to not support them wouldn’t be right”

The protest fell on the same day as the 50th anniversary of the Chicano Moratorium, as the demonstrators continue to fight for civil rights issues among the Chicano community.

“As a Chicana myself, I want to support my community in any way that I can and I think a lot of progress is made today, it really opened my eyes to how beautiful the community is,” said Brynna Garcia, a protester. “I’ll do anything to support them.”

Celis said that the support gives her hope and happiness: “I don’t feel alone, I’m excited that people are coming out.”

About 50 people gathered at Celis and Castro’s stand. The protesters demographics consisted of a wide age range, from toddlers to older adults, and many different races and ethnicities. The protesters then marched a few blocks away to the apartment building where they said the resident lives.

Once they arrived at the resident’s home, a group of dancers performed to loud Latin music from a large speaker that a protester lugged down the street. Protesters took turns speaking in the direction of the apartment building. The resident never came out.

After several protesters spoke in front of the apartment building, they walked back to the stand and rallied the group to take further action against racist attacks on street vendors.

After the protest, dozens of people stood in line to buy pupusas from Celis and Castro. They sold out within two hours.