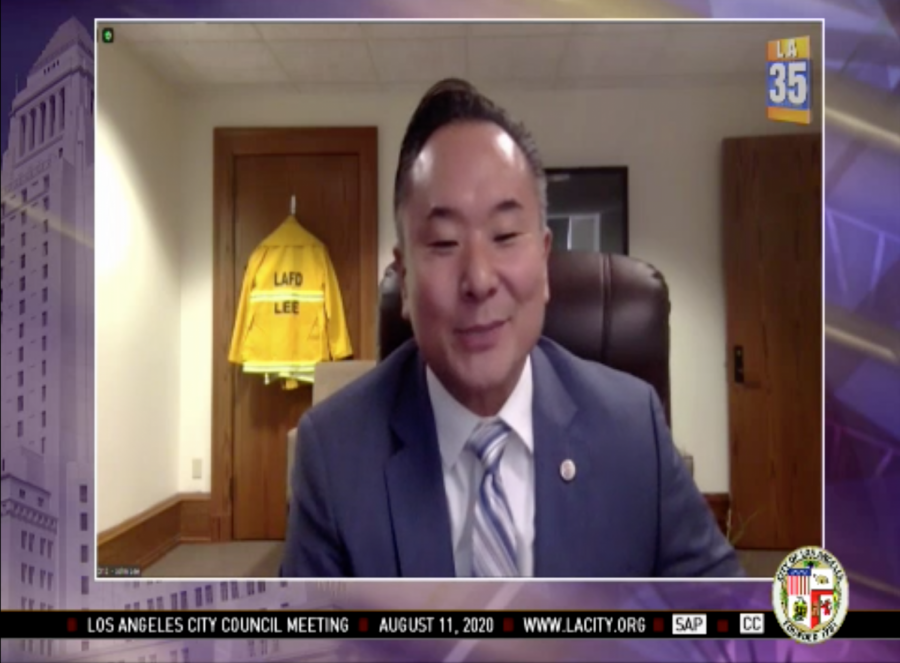 The Northridge West Neighborhood Council’s meeting on Thursday — originally to discuss and vote on three items — was dominated by a discussion on whether or not to submit an inquiry clarifying whether or not there are ethics issues concerning District 12 Councilman John Lee.

The majority of the meeting was centered on Councilman Lee’s involvement in the ongoing L.A. City Hall corruption probe, where former Councilman Mitchell Englander, Lee’s predecessor, pleaded guilty to one charge of obstructing a bribery investigation of his Las Vegas and Palm Springs trips in 2017. Englander also acknowledged that he accepted bribes, according to the L.A. Times.

According to the federal indictment, “City Staffer B” went with Englander on the trips and left office around June 2017 — the same time Lee left the former councilman’s office, thus raising speculation among community members that Lee may have been the unidentified staffer.

Since assuming office in 2019, Lee’s involvement in the case created conflict between himself and District 12 constituents. This conflict has carried over to neighborhood council meetings.

“If there [are] no ethics concerns on John Lee’s case, then everybody should agree that we should just clear the air and make sure that there were no ethics violations in the case of his actions,” said Pilar Schiavo, co-founder of West Valley People’s Alliance, a San Fernando Valley grassroots organization that has been critical of Lee. “It seems like everyone, in a non-political way, should support transparency and honesty in government, and that’s what really this is about. This is about checking to see if there were any ethics rules violated.”

“It seems like everyone, in a non-political way, should support transparency and honesty in government, and that’s what really this is about. This is about checking to see if there were any ethics rules violated.”

The discussion of the inquiry quickly grew tense as board members and constituents argued back and forth about whether it was worth sending the inquiry.

Board member Gail Lapaz commented that the debate on the motions was a “waste of time” as the conversation already turned heated.

“Yes, he went to Las Vegas, he was an employee of another councilman,” said stakeholder Steve Randall. “He may or may not have done something that he shouldn’t have. But as an employee, your boss tells you to do things and you usually do it so you don’t lose your job … if the man hasn’t done anything wrong since he has been in office, let him do his job.”

“I do support sending a letter, but I think we need to be very careful to be unbiased, as many people have brought this up,” said Abby Bailes, council vice president of administration. “[Stakeholders] can make positions one way or the other, but we have to be a little bit more careful as board members to make sure we are including a diversity of thought within our neighborhood.”

Later that night, the council approved a motion to request the city create a “Community Assistance Liaison Team,” an additional crisis response team, in its 911 system.

The council also voted to delay a request for the City Council to provide transparency in response to the City Council’s decision in June to reallocate funds that were withdrawn from the Los Angeles Police Department.

“Our whole entire government system and our whole democracy is on checks and balances,” said council board member Jennifer Krowne. “And even though we are the small guy on the government totem pole, I think that we should still be there to check, to make sure people are doing their job.”

The inquiry request, consisting of three motions, was approved 3-2 and it is headed to the general board in a meeting to be held on Sept. 8.