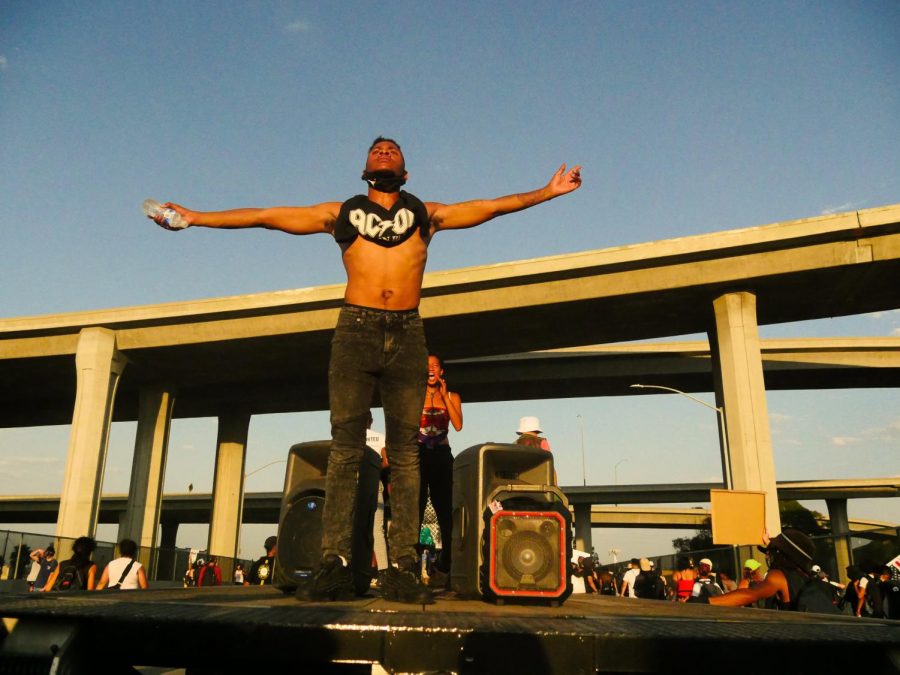 A man stands on a flatbed truck facing protesters as they march down Imperial Highway in South Los Angeles, Calif. on Saturday, Sept. 5, 2020.

The protest was organized by Black Lives Matter L.A., but speakers from various activist groups, as well as members of Kizzee’s family, spoke to the crowd and prayed. They gripped each other’s shoulders and tearfully described the last days of Kizzee’s life, and mourned for the other members of their community gunned down by the police.

Pastor Eddie Anderson rallied the crowd with a rousing speech and a prayer.

Several speakers called for the firing and prosecution of the officers involved in Kizzee’s death.

Shaneika Hall, Kizzee’s cousin, broke down in tears as she spoke.

At one point, about half the crowd moved toward the front of the station. According to several protesters, a deputy shot tear gas when someone touched the barrier.

“If you have children, please get them out of here, stuff is about to go down,” BLM-L.A. leaders warned.

The crowd — growing to a few hundred people — then marched east on Imperial Highway and blocked off the northbound 110 Freeway. Several California Highway Patrol and LASD patrol cars and helicopters responded, eventually using patrol cars to kennel the protesters off the freeway.

As the protesters walked off the freeway, they hung a sign for Kizzee on a freeway overpass on Imperial Highway.

As the group of demonstrators walked westbound towards the sheriff’s station, a group of CHP patrol cars gathered at an intersection, beginning a brief standoff with some protesters.

“Your sign is upside down,” an officer in a patrol car watching said to a protester over the car’s loudspeaker.

The protesters marched back to the sheriff’s station, where there were reports of tear gas, flash bangs and pepper balls being fired at protesters later that night. An unlawful assembly was declared around 8:40 p.m.

The protest came 100 days after the killing of George Floyd, which sparked protests across the country and started a national movement for police reform and racial justice.